Norman Fischer, excerpts from On a Train at Night 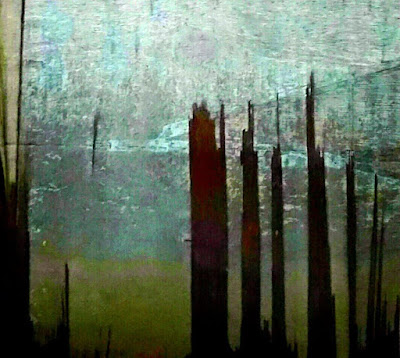 Ho|ma|ge to the Infernal City, image by Daniel Y. Harris

excerpts from On a Train at Night

I wandered in and was immediately given a name and a score
Now -- how to distance myself from the crowd--
Was it diet or hygiene? Wardrobe coiffure interior design?
That night I slipped away to watch baseball under the stars
The ball the cloud the arching glove
Or was that scars and love, abrasive unfolding of time against my skin
Without thinking propelled by the unseen adhesion
Justice
A penchant for improvement or perfection
The image of an alternative world -- imagination's horrid ideal --
Proved to be already exposed and over-determined
I had to learn a new language just to recover my socks
Which I left outdoors on the balcony railing of the last hotel
In the final city of the farewell tour

Just that much urge toward filching — take what isn't yours as if it were  —
Take any sense that truth is spoken here — lethargical liturgical truth --
And the indignant ones mesmerized by shouting spill over freeways unfurl their banners
Down from overpasses
Being alive's an exaggeration, protest against contingency
An allergy or flea bite
Bacteria extol— DNA an arrangement of letters spiral death dance --
But a stone's set in its ways
You can't draw blood from it to test its mettle
Glowing in its aura — the moon I mean — above --
Shocked by its own light and shrouded in someone else's cloud

Just lie down in a boat and sleep
It's artificial but in our language what isn't?
Peculiar magic of our idiom. Could be the first time that happened.
Any variety
Of the many varieties
Of endings
That produce beginnings
When after nothing something again appears
Curling shot and extruded desire amounting to no more than …..

Thinking through, repeating  — a new world to start with —
Down deep in cavern who could think her way into this newness
No way but going on being so long as there's voice to holler
Murmur I mean
Solitude necessary for any recognized unacknowledging shape — I slake my loneliness in it —
Which is never preservative.
.P.   is   .J.
Or so they say at this late hour when we are about to anoint a new king
Same as the old one

Jeered and mooed and read the oracles
Fuzzy clouds over sea must mean something like tortoise shells entrails tea leaves
All pattern decodes significance which is —  what, after all  — anything?
The implications --
Preternatural twilight once we were happy — whose concept is that? Cows
they say are happy so people can't be
Bees and beers and brisket — gristle — these lines indicate that—
How chew on words of the gone ones of course I do
Everything said in exactly these residue letters
Shells and seaweed jumbled by the shore
Invisible at night
Walking back and forth in this distracted manner — the melody sways back and forth —
Pock pock pock pock behind it