Mark Scroggins, Capital; or, The Young Person’s Guide to the End Times (3 & 4) 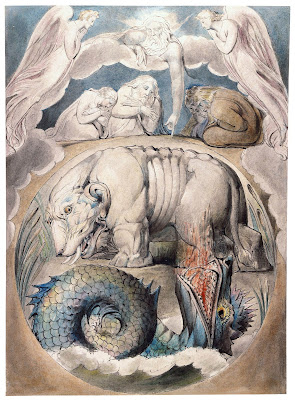 Invocation to my own ignorance. Invocation
to general apathy. Special invocation to
carefully selected, bepoke images
and deities, Old Ones and previous

tenants. Repeated throaty invocations
to quiescent lusts, desire, and cupidities,
urges that sleep past the alarm or hit
the snooze button again and again.

That late-born eighteenth-century Adams
had it right, by way of Willard Gibbs,
though golly it just doesn’t feel
ethereal, the dogshit clouds and haze

of printer’s dust we keep plodding
through. Gold used to flow like
blood though the city’s body.
It looked like Arnold Schwarzenegger

in the first Conan movie, big and taut
and ox-like, curiously beautiful. Then
we had to warp our imaginations around
those rows of falling luminescent green

pictographs, a thousand CGI ticker-
tapes at once. And now it’s all beyond
imagery entirely, a big blur—not even a
blur—a series of waves—no, fuck it,

forces—not really that either—any-
way, we’re pushed around and shaped
and stretched like—flattened, rolled,
corkscrewed and patted down

to sleep. The sky over the water, just
at dusk, feathered wash of pink and yellow
clouds from north to south, buildings
stark silhouettes broken by the ripples

in reflection. The air, emptied by a rainshower,
is warm and cool at once. Behind me
a shirtless man, hair slicked with grease
and sweat, is helping his blonde companion

stand upright. Look at that, baby-girl!
Look at the fucking City! They want across
the water, they want the West Side, they want
money and a place to sleep. The body was found

in the library, of course. Among the books
and papers and ashtray stands, the mounted
trophies, the decanters and brandy snifters,
the grimoires and spellbooks, the slide rules,

among the semi-automatic weapons, the discarded
campaign posters, the American flags and
moth-eaten berets, the wrapped plastic
cutlery, the parmesan cheese and powdered

garlic shakers, the lox-cutting knives,
the complimentary yarmulkes and the Shriners’
fezzes, the bound volumes of TV Guide.
The body beat itself to death with

the candlestick (or perhaps the wrench?),
or so they tell me. The mystery ought to be staged,
it sometimes seeems, in a series of New
England bed and breakfasts, each one run

by friendly but timid sixtyish couples,
full of white people driving SUVs with
GPS and NPR, rollerboard bags and Ivy
League sweatshirts. And you crest the hill,

where a huge bowl of forest opens
before you, one sign to Whately,
another to Innsmouth, another to the Admissions
Department at Miskatonic U.

The storms took us unawares
back then. We watched the east, observed
the birds and furry animals, licked
our fingers and held them to the wind.

You sprawl, limbs and sex and hair,
across a screen, a low-pressure front
dragging my calcified desires across
half the world, spinning and elliptical.

Take no notice of this sign. The moving
sidewalk is ending. The year of forgiveness,
decade of grace, is coming to an end.
Our expiration dates are obscured

by “clearance” stickers. A vein
in my foot, visibly pulsing—or perhaps
the nervous twitching of an eyelid.
Impatience. Imprudence. Forgetfulness.

Blindman fingers carefully
through the thesauruses of his memory,
drawing out the paraphrases, rejecting
discarding the chaff. Repurposed,

refunctioned, extracted and remixed
and reset. The liberty to justify
the way of things, liberty lost
in license and licensing. A kind

of bend in nature’s genetic language,
miscoding or mistranscription, fault
in the lowest reaches of the machine
code. The Lectures on Rhetoric and Belles

Lettres, the Lectures on Jurisprudence,
nugatory beside that grand
and solemn pin-headed justification
of Original Sin. One bird calls

to another, the squirrels race around
the tree, and the wee fluffy dogs
peer out their strollers at the teens
flâneuring their way through the mall.

All that time, all that toil
and pain to get to this—that the price
might be clipped from its tag, and the gift-
receipt might bear no final tallies.

Somewhere far away a computer is shifting
electrons, deciding whether you’ll spend
your last days in a ward smelling
of piss and disinfectant, jolted awake
through the night by the snores
of another huddled, neutered
lump of amnesia, or rolled
gently sunward
through the park
by a pair of large-hearted,
bored Jamaican nurses. Pushed

to the Battery, where just on the horizon
you can see the refugee boats
crowded so closely the dots of people’s
heads are only pixel statistics. But summer

won’t turn off the sauna this time
around. I have the sidewalk to myself,
my personal space of personal rule
by divine right. And take that down

with a pamphlet, or a tweet, or
some worthy, ironical meme. The binding’s
come loose in every signature, and the pages
blow past me like Walter Benjamin’s dopey cartoon angel.