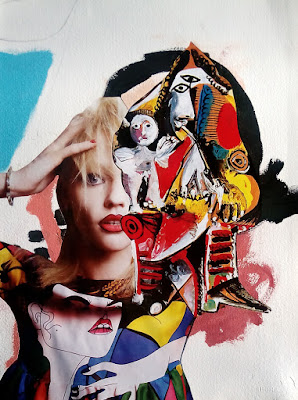 The Jubilation of Air

RELEASED clouds and tiny gaps
of old buildings of winter.
No sign of the sun?

and lighthearted! Finally
reaching one another first
in free harmonious clumsiness, *glee*.

and explore the cracks as I would love to
by my dance with the rain. How
The earth is just a cold, wet wind enveloped

by grass blades and lonely, eager
seeds that somehow stare out
of the glass cage, and watch the earth

waiting my arrival.
Thirsts slight, lipid pools. I the leaves
frolic, and I observe as with a subtle in a jittery run.

welcomes me new the join YES, creating life
by small touch. be as I land
my quenched home.

The essence of human power:
access to the cosmos from the heavens down to
earth & into the Cro-Magnon underworld

Charles Olson on Wallace Stevens. to Creeley, May 5, 1952: “For the lie in Stevens, however much the pleasure in the play of words, is his language, that, it is without rhythm because it is without passion which is person (not personae, that further divide against mass).”

To Creeley, May 6, 1952: “We both had a sudden excitement, just now talking, when it turns out (it was that fucking Stevens who had provoked it by some line about poetry to undo dirt) O that dirty Crispin of his—dirtier than Prufrock): those who keep themselves away from life (again protecting a—the—pudenda) that Con said
I don’t feel any dirt
And Christ I loved her, for, there ain’t none, and those who have it, who have this thing of original sin hung around their cocks like a  dead albatross, are of another tribe, a tribe of sin not at all of the  tribe of men
And it struck us both just then what what makes communication with you so open is, that you have none of this shit in you: you are free of that.”

In the beginning was drawing, line on stone or bone,
consciousness united with its own perceptions: womb of the creative!
A totally metaphoric world, no difference between subject & object.
Dream holes: anywhere but nowhere in particular.

James Hillman: “The most distressing images in dreams and fantasies, those we shy from for their disgusting distortion and perversion, are precisely the ones that break the allegorical frame of what we think we know about this person or that, this trait of ourselves or that. The ‘worst’ images are thus the best, for these are the ones that restore a figure to its pristine power as a numinous person at work in the soul.”

Think of this page as a phare on night’s alabaster dives & cornucopian emptiness, cross-wired to the ochre of farraginous dreams.

One’s place is an expanding lesion in ancestral fog. Ultimately I am, sitting here, a ghost figure crouched before a cave wall 20,000 years ago.

Pregnant abyss of the enigma of male birthing. Non-existent gestation—egg fertile only with the
maggot of self.

Is our war on animals a planetary cannibalization brought about by self eating self to reach non-existence in a masque performed by hydrogen mountains & sulfur assassins?

The salmagundi of “now” & “forever” is the crucible that contains the frailty of eternity.

James Hillman: “Images are the compelling source of morality and religion as well as the conscientiousness of art.”  Show this to Gary Snyder [See the Winter 1996 Paris Review Snyder Interview].

The writhing of precision as it meets time.

Perception is the handmaiden of imagination.

Cornucopia of the sunshine forest with its anteater molecules,
a Reich bion lurking in each word
whose apogee is cratered with emptied hives.

Sun as a circumference concentrate.

It is not enough to represent, to re-
present, the present as leftovers.
Warmed up past is forever at our heels.

The analphabetic, orthochromatic, anti-nature of the mind when freed of cauliflower containment.

Alive to the dead end in every observational move.

At the corner of Bukowski & Ashbery a groin helmeted with bridal choirs.

A stratigraphic sequence reveals its ember-work, its furnace forum always underway. It rests in a floral nest, a leaden, still hissing egg.

James Hillman: “We have to tie terrorism to its roots in our religious consciousness. A terrorist is the product of our education that says that fantasy is not real, that says aesthetics is just for artists, that says soul is only for priests, imagination is trivial or dangerous and for crazies, and that reality, what we must adapt to, is the external world and that world is dead. A terrorist is a result of this whole long process of wiping out the psyche.”

The greatest insult is to be pressed to
the backside of a word, whose lobes are in contact with
what the word is said to signify—a folly,
worse the gull that engenders self-hate
(is it any wonder, then,
that people back their cradles up to their coffins
to dump in life unlived?)

To revivify my mummy, not my mommy,
but my puppet, my eidolon where Crane is
a mass of strings in cross-pull to themselves.
Cross-pull or crucifixion strut,
nail-holed Hart as the mage of my abyss,
as old as Dionysus but not as old as Lascaux…

Being alone is real. The I spoken here is not Clayton
but Being reflected by Clayton’s non-existence-to-be.

The ego which absorbs all like a sponge & then is dissolved in the Void of the Abyss.

“It is when we have made this leap or jump across the Abyss—and only then—that we
know that we are not… At that moment we realize that we are void, that void is
subjectivity, and that subjectivity is us—not us as individual selves but us as all sentient
beings, not as any sort of sentient being but as sentient being as such. That is the negative
way… that is why we must know that we are not in order that we may understand in what
manner we can be.” (Wei Wu commenting on Han Shan’s words).

Poussin’s satyr-scape is no more.
The anointing of the dead Adonis. No more.
Pan’s shadow as leafy quilts. Psychic clouds boiling westward. No more.
Blind Orion searching for the risen sun. No more.

Nathan Spoon's Exploding and Whirling: A Review of The Complete Poetry of Aimé Césaire, Translated by A. James Arnold and Clayton Eshleman 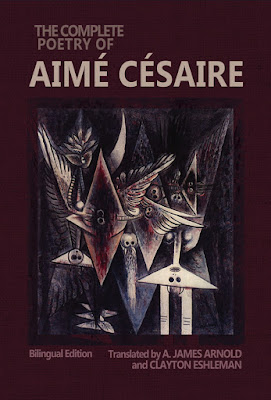 Exploding and Whirling: The Complete Poetry of Aimé Césaire, Translated by A. James Arnold and Clayton Eshleman, Reviewed by Nathan Spoon

The poetic journey of Aimé Césaire, a Black Francophone, begins in 1939 with the appearance of Notebook of a Return to the Native Land, a long poem demonstrating the extent to which he has already internalized the poetic energies of predecessors as eminent as Rimbaud, and then continues until the 1994 publication of the twenty-two poems that comprise Like a Misunderstanding of Salvation…, his last book. Between these two works, is the oeuvre of a remarkable surrealist poet and founder (along with Léopold Senghor) of Négritude, a literary movement that united Black writers anywhere in the world based on their shared African ancestry.

With Notebook Césaire strikes forcefully, in a poem, made up of one-hundred and nine sections, that at first offers protracted descriptions, laying bare the collective hardships of life in colonized Antilles,

At the end of the small hours burgeoning with frail coves the hungry Antilles, the Antilles pitted with smallpox, the Antilles dynamited by alcohol, stranded in the mud of this bay, in the dust of this town sinisterly stranded.

I celebrate myself,
And what I assume you shall assume,
For every atom belonging to me as good belongs to you.

As the translators of this volume note, the narrator of Notebook is not introduced until the twenty-fifth stanza. This gives a firm sense of what becomes more pronounced as Césaire moves along through his years and decades. The concern for others expressed in his poems, especially for other Black people, and the intense descriptions of the world beyond the individual self, are prominent to the degree that the self is best understood in relation to others and the otherness of society and world. If Whitman can afford to be cosmic, as he is in the opening lines to “Song of Myself”, Césaire, by contrast, cannot.

This leads into what is most unique about Césaire. For all his incendiary experimentation, subversiveness and even blasphemy, he is constantly pressing the vision of the eminent end of colonialism. Here is another contrast: in relation to his predecessors, which also include Baudelaire, Lautréamont, Mallarmé, and Péguy, Césaire can be blasphemous, but not entirely blasphemous. While Rimbaud says of Hell, “I swallowed a monstrous dose of poison,” “How nicely I burn” and “The air of Hell will tolerate no hymns,” Césaire describes a living hell, with hope for a better future threaded though it:

I say hurray! The old negritude progressively cadavers itself
the horizon breaks, recoils and expands
and through the shredding of clouds the flashing of a sign
the slave ship cracks from one end to the other… Its bell convulses and resounds… The ghastly tapeworm of its cargo gnaws the fetid guts of the strange suckling of the sea!

Despite Césaire’s differing circumstances and concerns, his seminal collection is, as the translators of this volume present it, Solar Throat Slashed (touched on in my note at the end of this post). It is a collection of seventy-two short poems (no poem runs beyond two pages, and many take up less than half a page) that offers a far more comprehensive line than the line of Notebook of a Return to the Native Land. To provide a sense of range, here are excerpts from several poems, along with a description of the gist of each.

and some are simple like “The Wheel” (appearing immediately after “Intercessor”):

holy shit they have secured the universe and everything weighs―every-thing―the plumb line of gravity having been installed at the facile bottom of solidity―the uranium deposit the garden statutes the perverse loves the street that merely pretends to be the fluid stream don’t mention it whose pace more sluggish than my feet there is nothing up to and inclu-ding the sun that has not stopped its clouds forever fixed.

Some poems, as already mentioned, are blasphemous, while others are more devoutly religious. Some are by this point in Césaire’s writing expected, and some are entirely unexpected. Still, the poems are shot through with the poet’s central concerns, but these poems carry that concern into a larger arena, as does the poem “Torture” (and, although it is tempting to quote this brief poem entirely, here is the second half):

Going into and then on from Solar Throat Slashed, and through the rest of the poet’s oeuvre, a reader discovers expansions and contractions of vision, as well as a general movement into and then away from spiritual potencies, allowing the poet to address political concerns, before again embracing the spiritual. Through it all Césaire remains intensely imaginative, proving himself master of a poetic voice that is, as Jean-Paul Sartre describes it, “beautiful like nascent oxygen.” With The Complete Poetry of Aimé Césaire, A. James Arnold and Clayton Eshleman have produced a seminal achievement in the translation history of Aimé Césaire unlikely to ever be surpassed. 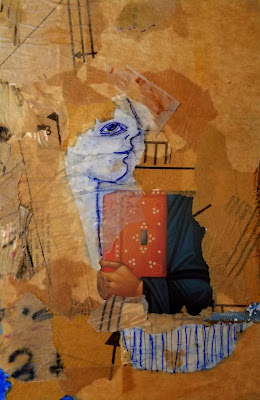 less one dissuade
the wisps 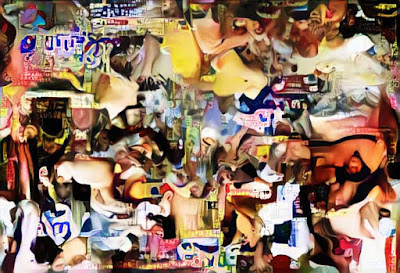 Not that improbable yotte, image by Kenji Siratori

Kenji Siratori is Japanese avant-garde artist. His first book Blood Electric was acclaimed by David Bowie and Dennis Cooper. He has also collaborated as a sound artist with David Toop and Andrew Liles.