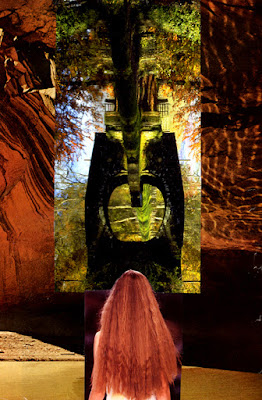 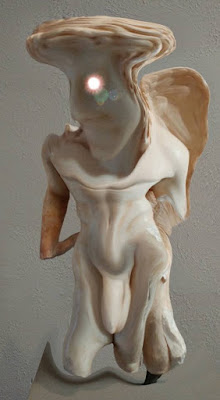 
The Lord Sends a Wind

Flies on the baby | bird blown terminally onto
the trail. This is the life of water, triggering a
pinch of pain within tenderest fire; this is the

wall of confusion opening | a portal to a | world
scoured of unreal tragedies; there being no name
for what upholds the citadel or ground of the ever-

expanding song of our Homeric onanist, whose staff
greets the tide-line foaming upon these otherwise
vacant sands; and | yet, when | all of the contained

sand-grains have made narrow passage through the
almost-overlooked-middle, a whale’s fluke departs us.

A Cup of Coffee

An ambiguous I coexistent with a summer afternoon
breeze. | Of course some | quasi-poetical contexts
can make autobiographical trivialities seem to

be less tiresome than | they are. Poetry can entail |

sweating through a t-shirt not with-
standing, especially | when your head is bent forward

slightly and your booted ankles are crossed; for yours
is the sorrow of a | pink-hearted and modestly-spined
seashell. Now a | girl surfs with her | left index to

her lips and then her | left hand twirling her longish
bangs, as the NASA craft gives Pluto | a reading flyby. 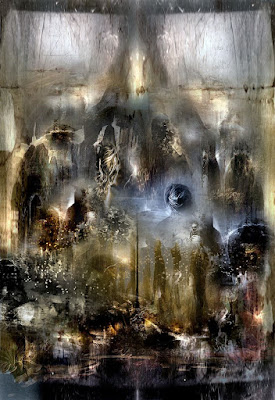 The Unspeakable Coitus of Mylius, image by J. Karl Bogartte

The shadow of a fresh kill is the end of silence, the ever-present ring of enchantment. The spark of rattling insects... Nothing is ever finished, it just continues, changing places with memory... A vague reference to a dance of wild whispering.

There’s lightning in the moth house, ghost glow in the underground, and the light from when to dazzle the almost then, mindful of radiant anomalies. And even through the windows of ambiguous desire. The enchantment of one who interrupts your gaze…

Through shadows of the face, of more light, swimming pathology, pausing in the runes… You spread out like a mythology. Shadows of lunatic endgames. The XXIII key, missing link to her voice of glowing loam. Time-warp to skeletal maze, burning a window in the garden. Owl-turning, dust-making. She lamps out, dividing the spoils.

Night with its terrors, leaping through hoops. Nagual trapeze. You are upright panting and sleek. Marked. But cunning and random, drawn into a circle. Always an unauthorized approach. Consciousness passed through eyes… and at night, from mouth to mouth. Breath to breath, passage through the skin, to transparency…

The desire to kill someone is equaled only by the desire to bring them back to life again... the rest is immoral.

A girl infected with candles, mirror of the humming. In a cloud, leopards, for the revolver, braille, a semblance of movement, long-stemmed invoking of ancient wiles. In that landscape you are fog the color of bees in sunlight, in cinema, a doorway for binding spells, broken into glowing.

A language of water opens the door to illusive interiors, in the field at night, when the walls are costumes begging to be worn, sheer and unsettling, effortless. Cause and effect grappling with the energy of presence, the hidden... If you spread your legs, for light, there is the candle dripping darkness for sleep and spell. The first spell, the primal incantation that takes you by surprise, even as it exhausts itself.

“The wind, leopard...” “The rain, assassin...” The book, sister to the bell-tower, gathering steam, remote from the forest, burnt by moonlight into a long-limbed calyx that spins around in circles, repeating your name, a coupling of numbers, kissing only water, savage computations. Shadowboxing with consciousness. Life is that breath of Jívaro dust blown into the face. A clockwork scent drawing blood, where indigo climbs into darkness.

Marvelous derisions begin to pass expressions of love between masks and triangular numbers. Paradoxical bedouins exchanging keys and mannequins, measured with subliminal eyes. You sleep like lit candles in many places. Eyes of torture and trapeze, softly humming. Light-headed passageways. The least resistant stepping-stone, axis of negative. For the time remaining, against what might be expected. You take your leave. It troubles the heart. You go with fire...

Grace is the art of luring ravenous dogs into a state of springtime.

Candle entices the fabric of a violent glance, draws Masque out of reverie with sudden leopards that guide the pleasure principle through walls of an ancient wailing. Masque suckles the ashes of invisible sacrifice. Rain condemns Spell while releasing her words of love. Candle spreads her legs, inviting the tall revolvers into compelling shapes, clues, devoted whispers. A fountain of antibodies switching analogies with night, escaping without harm.

She has not been spoken of for many years, she is mything vitreous and tapping pawns for tallow, she is quickening her fluidity, to divert and disguise. Light poured into lacerations the way shadows enter clothing, for only a moment, or two, only a hidden space. A translation, for throwing phantoms into invisible walls. She is myth-ratcheting amorous, chiding brutal structures for mountainous beckoning, to corrupt with pleasure.

Amethyst of exchanging blood that ravages equality in the mother tongue, when the moon is a cat’s cradle in the sea of consciousness, of civil war in the telepathy of rebellious spirits, lovers in the fields of lunacy...

The daughter of glow-worms painting portraits of mysterious females and the reindeer’s ghostly double, all perfectly cracked like glass, like an intrusion, like a flight into the obscurity of uncharted whispering. A slight touch on the shoulder, the movement of an affair between invasion and emanation, the pitch of bone against bone, faces merging in the moisture of a single word chosen among all the others. A vampire word...

Starlight is a liquid used to power a whispering machine.

Slowly dying insects power the molecular light of surprise endings. You are not waking without roots, without sipping blood, without that urgent female timepiece erupting inside a bewildering city ever so slowly landing in a body abandoned on the highway, emitting sparks. 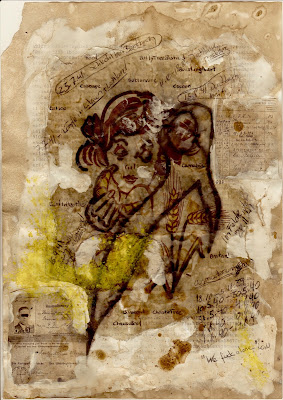