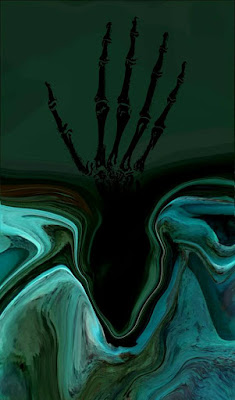 The Hand is a Prophet of Doom,
image by Daniel Y. Harris

When the streets grow pale and crisp
with moonlight snaps, ice eyes
he may emerge, coloring each chilled
breath taken by the solitary citygoer.
A costumed deja vu, he issues dim calls to
remembrance in the slinking itches
shadow plants far back in the smoke
machine of memory. a buckled succubus,
drawing drowsily on lazy hesitation
he studs our lazy dreams with silver
Foxes, moving quickly through to our
waking moments. growing stronger, he
bleeds inky halos over the slim lines
written in glee. You may even find
him over the shadow of the pen,

tracing angry contours over the
angry rhythm of every line.

I am the lighthouse keeper,
the night manager
for the ambulance’s
blue, red wick
the coordinator
for whistling colors.

Bigfoot ISBNS, mirrors,
my fog horn double
down there, enunciate palmistry…
(along with a little love)
Keeps our sedate island
smoking away in good order.

Clients in the sand
knock and knock,
but I get around most nights.

It can be beautiful
helping this tide
kiss our namesakes away.

He turns in his funeral suit,
wiping an nighttime

algae glow from his
brow. Her hand rests in his palm
with a grenade’s patience, gone
limp just in time to squeeze again.

He is falling, never having known
them to extend so far down before.

Skipping a step lower on the carpet's
stairs, bloodshot eyes blaze at landing’s

known only to lucid sleepwalkers.

The Holly Flutes, The Fields

The dead follow bliss with hound dog eyes.
Cornfields are pawed with their hopes,
rusty legos, found objects in private renown.
Ellipsis is another key by the tomb.
So knitting thimble, so garage sale ring,
oak shiver by the moon’s garlands,
the chaplet cupboard’s slide.
The dead leave holly fields barely touched,
green a cold breakfast whittled
in small bruises.  So knitting thimbles,
so mommy’s hearted baseball.
Only a fool stirs up a bodiless brew.
The dead mesmerize passerby
with closure hints, eyes wide shut.
They stand erect, Piggy in Deliverance
cigar shop Indians sturdy for disaster.
Warm brews keep them. They read TV
captions in slow burn, spilling an alphabet
for morbid curators. So knitting thimble,
so hearted mommy’s baseball.
Ellipsis is a trick key in the baritone’s soil.
Their singeing lifeblood crusts in keyholes,
halls in standby wheeze for later.
Their facemasks drool in a striptease ballet,
what’s left staring under the tarp .
So rusty thimble, so grandma’s crockpot,
so the garage sales open later
each spotted noon.