Nathan Spoon, Of Redisplacement and To Various Makers 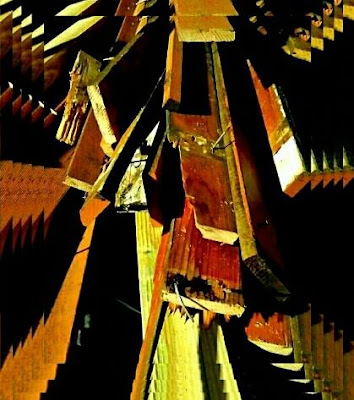 Ho|ma|ge to the Near Death Experience,
image by Daniel Y. Harris

I | am the stellar | enactor of the original; never-
mind particularities of moral | obfuscation.
Mine is no winged wisdom. I rely upon no

over you as well. For my honesties I have been
branded deceiver | and, along with the few
who dared to agree, have been cast into a

fire that rages | below the elemental. I endure
what must be endured. I will not bend my knee. |

Out of paradise I fell: with traces of
power in my bones, knowing not only
good but also evil, which is greater than

what God knows. When my forehead struck
earth it split | hermaphroditically and then
totally, as one adamantine rib jolted from

my side. By my side Eve gave birth to
three sons. One who nurtured the fruits
of earth and one who slew the nurturer

then fled, to where | I can not say. Our
third son shrouds himself as if in death.

As a rhubarb pie is an occasion for
enjoying sweetness, so a given idol
provides occasion for brute idolatry.

Measure-maker! Unfaltering lapidarian of
the heart’s tripartite stone! Swirling leaves
scrape along pavement, as one way-

vility remains. Departed | I shall not pass a-
gain through the five converged star-points.

If not for Xanadu, | Kubla Kahn may
have remained behind the golden
bars of your dream. Through you | and

your kind, prophet John keeps opening
his mouth, uttering | additional | refrains.
If such river voices as these run dry,

there will be no secret marrow left inside
terrestrial rivers; and the moon | will
no longer govern ocean and seed tides;

the sun no longer hold | its life-sustain-
ing fire; the hand no longer sweep the lyre.

How cold and narrow your bed was who
can say? What the good doctor would
have made of your rhymes is fod-

der for incommodious speculations.
Yet it is certain death was your met-
phor for the Abyss, | so long as we are

able to slip the path of swerving psych-
ic forces. Thinking about your thinking
waters unknown gardens in my soul;

When you translated Sesame and Lilies, | no
doubt your mind at first opening tentative-
ly, then vying, then wicking sponge-like, you

may have been unaware what effect you would
have on at least two of my contemporaries; one
a Canadian, the other from my own half of

the globe; both goofs whose work, like yours,
I wish I knew better. My obsessions are per-
haps too few. My attention is likely too narrow.

There is too much time for unwinding and
winding the air. There is not enough time.

You, the bookish poet, writing among
stacks in the library or out of the
library in your head | (the very head which

had been a hieratic bust in marble). Your
endless song an impenetrable thicket
touched by flouncing flowers, holding

a power to change us unexpectedly. And
flying in the surrounding air is an as yet
undetected apotheosis, so that no sub-

stance is foreign to another, despite a dis-
cernment | keeping things rightfully staid.

The great wink you speak of is cut I
think | deftly in alabaster | or lime-
stone. Cloaked in the tone-cloth of

seas, to be inevitably the drown mar-
iner’s eyes (O my Ariel, look! look!). As
a new stain rings across those pre-

White ribs sunken in a dusty expanse | as
your nectarine neologisms provide us
sustenance. Wheatheads whispering-in, as

it were, from another world. Your music
graces my heart even as I slither under
one formidable stone | until the dry ob-

structive blizzard blows over. For as one
prophet foretold, the reaped whirlwind, e-
ven as it sweeps away the chaff, does

not endure. Not yet fifty, you went to the
Seine, | leaving us drinking your abysmal milk.

You, who are charged with too much
difficulty and a too easy assemblage, you
conduct your delicate music and your cog-

comprising a good Pandora’s box gorged
with magical fruit, your glacis glowing
carelessly in the warm, clear sunlight, while