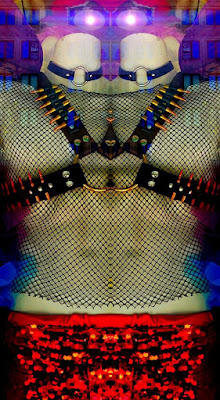 “For in my present life, I was pledged to the butterfly-winged Purple Emperor, against whom that tatterdemalion pretender, the king in yellow, eternally warred for possession of the Throne of Time/Space
And we were entering an astrological cycle in which it was foretold that a king could over- throw an emperor. . . .”
William Patrick Murray, “The Purple Emperor”
dueling shadow parapets,
segmented hieroglyphs simmer in granulate pearls flown together
in a magnetic field run cool with the brooks
of space’s canopy and a hershey leather
star pail, the amethyst dig of the big dipper.
Sheetmetal codexes spin on a record player's
needle drooling with morphine tears frozen.
“Go grease the horse on the polident farm”,
the dictation rolls, “the piano wire is holding
the blotters together,
“and peach warm her grin is stubble
with geode and harmonic gold.” The
banjo insects laughter is split in ivory nubs,
cackling in the dark, Mr. Peanut nursing her
wounds in the silo, closing his eyes. The dawn is capped bouillon
grinning, the steamed dawn
chilled in choral ice architecture,
the chilled pantomime leering down. A blotter face rises
also in the violin grottoes, the nude wired
mummy lies in the dentist’s chair with chinese
fortune wax melting through a
burning color of halogen numbers, a lexical glossalia.
Artificially tanned, Sun Ra turns to me,
laughing. “Dictation ends,” The cylinders
in Rutger Hauer’s gun are filled with pearl mummy
teeth, each crag reflecting a pinched
strata of crystal light, Billy the Kid’s smile
undone in these gallery’s representation.
A drooling angel drops Kodak bits of 8mm
that move as stained glass dropsy in the captain’s
sliced palm, rising and fading in the ship’s darkroom.
The Icelandic Moss string through
the dead nun’s midnight hour beads; they sink
in flanked procession with electronic candles
cinched in the riverbeds, fleets drowning in
an abortive mission. Slenderman, a lettuce head,
bends as a chalk martyr, uncrowning himself,
drowns in the Instagram pond full of garland Hosannas.
The grated Tron guillotine metal falls
in the REM mirror, and Poe's head appears as you unclutch
the handle, two quarters sown in his eyes.
His fainting candelabras are bursting with green Goblin flames,
snaking in a Cthulu dance, the voodoo
beads spin in the singed sigils, the small PacMan domes
blowing in trapdoor glass, a sound as a xylophone
skating is made, and expires as the stars do, only
here. Blue rain falls in seashell calypsos spun
as the glass trapdoor shatters and The Purple Empress: cries
asking why we watch her, we
the hypnotized denizens of a drowning!”

—from Songs of the Shattered World:
The Broken Hymns of Hastur


John Thomas Allen is the author of Songs of the Shattered World: The Broken Hymns of Hastur. His publications include Spectral Realms, The Adirondack Review and X-Peri. In 2014 Ravenna Press published a surrealist anthology entitled Nouveau’s Midnight Sun: Transcriptions From Gogonooza and Beyond, based on the 2012-2014 surrealist movement (“The New Surrealist Institute”). He is assembling a new anthology which harkens back to Aubrey Beardsley and the original “Yellow” decadent books.