AC Evans, INSIDE THE SILENT CITY 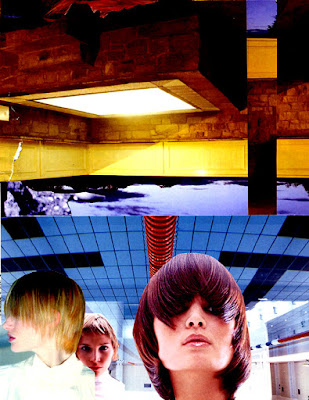 Inside the Silent City, image by AC Evans


INSIDE THE SILENT CITY

Inside The Silent City:
Stunning new rebel reserves on red alert.
Flicka Vee, Omega Lightning and Candy Flash
Scanned a crystal ball in the atrium, looking for comic turns,
High Street visions, Jet-Age babes, various venues forgotten.
Then, beyond our mono-rail vanishing point, they see
An aurora scuba squeeze; the counter-turn is
The function of the antistrophe, said Omega, but
You can do the splits, whispered Candy.
The others just laughed.

Rave arcade inflatable meltdown freak-fest
Collective sequinned jacket, snake-hips fire
Still burns – few surprises, high-flipping brides.
She just went for a shabby exterior, then a fractal cadenza,
And then some of the coolest frocks around this crystal breeze
Of shaky, amateur footage and smiles powered by
Our three intrepid explorers, in Technicolour.

This is the Ghost Spa in The Silent City,
Where nothing ever happens, not ever.
No two ways about it.