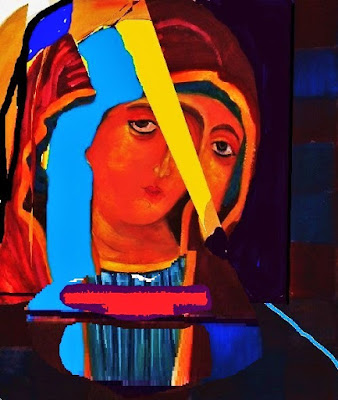 On the moon’s craggy canvas,
our brains brushstroke a face
with droopy lids and fleshy smile
from craters and ancient lava flows.

We spot Demeter on a russet,
the Virgin Mary in a quesadilla,
Our Lady of Lourdes on an oak bark,
woman in repose as a mountainside,
amazons battling cumulus nimbus,
a smiley face emoji on Venus.

We cannot help but to make things up,
turn Rorschach projections
into angels and clowns,
even the fin of a fish left on a plate
is devoured by a Michelin star
in the squint of an eye

Dancing with Neruda's Bones
...bury me at Isla Negra
in front of the sea I know...Neruda

Neruda, only known to me in the poet’s words -
I love you as certain dark things are to be loved,
in secret, between the shadow and the soul -
Neruda bones have been exhumed for examination.
I did not want his decomposed body uprooted
from its plot, transmogrified into murder mystery.

Poet of eternal present, I cradle his imagined bones
and pull them to me, his tango body’s phalanges
jangling as I cross and giro their tibia and fibula
pinned by the sun between solstice
and equinox, drowsy and tangled together
clanking across tiles of a kitchen floor.

Let Neruda be, I plea, still dancing, his bones tethered
to my body tripping and swaying in tango rhythm,
talking head on the radio droning on
in conspiracy theories of the Pinochet regime
poisoning of Neruda, life split in poetry and politics
as the night wind whirls in the sky and sings.

Forecast of ill fortune - to lift bones from the grave -
much like this wave of melancholia. In inevitable
surrender, I concede: what does it matter
to have dug them up as his love lyrics resonate
in his monotoned moan, Gardel crooning
behind our bumpy boleo: el dia que me quieras.

Neruda’s unearthed skeleton clings to my arms,
scent of honeysuckle climbing limbs like vines,
as I sweep and dip inside his metaphoric sigh of sea
and our final soltada, voice of the rain crying:
no carnations or barcaroles for me,
only a wound that love had opened.

Neruda, now so mystical and magical,
cloaks his bones in flesh and play, conjures
a dusty fiddle, leaps and lands on the walkway below,
the violin with its ragged companion...
learning how to befriend lost souls
and sing songs to wandering strangers.

Nocturnal Haibun
I will think it a pity that you have no way
to remember tonight’s play of light.--Kawabata

Caravaggio powdered his paints with their iridescence.
In Frost’s garden, they were real stars to fill the skies.
Children contain their flickering dance in Mason jars,
smear the emerald brilliance around fingers and wrists.

When
the dead grew too heavy
for the heart to bear,

when memory
could not console
nor priest nor god
nor soaring bird,

when you reached
for me & I was not there,
when what was
almost said
is what endures.

Andrena Zawinski, an award winning educator and poet, is the author of three full collections of poetry and four chapbooks. Her first collection, Traveling in Reflected Light from Pig Iron Press in Youngstown Ohio, was a Kenneth Patchen competition winner in Poetry. Her second, Something About from Blue Light Press in San Francisco, CA, received a PEN Oakland Josephine Miles Award. Her third collection, Landings, is forthcoming from Aldrich Press. Zawinski was born and raised in Pittsburgh, PA but has made the San Francisco Bay Area her home where she founded and runs a Women's Poetry Salon. Her work appears widely online and in print. She is also Features Editor at PoetryMagazine.com