John Amen, Kenneth Goldsmith’s "Wasting Time on the Internet," An Endorsement of the Digital Age 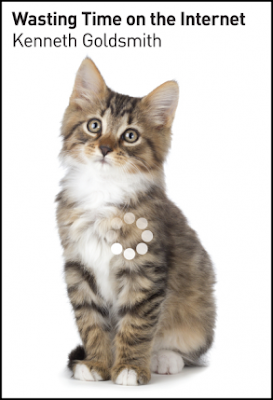 
Kenneth Goldsmith’s
Wasting Time on the Internet:
An Endorsement of the Digital Age
by John Amen

Much popular music released over the last decade, if not the last couple of decades, hinges on the forging of compelling hybridizations—established genres being creatively blended; for example, electronic folk, electropunk, etc.  (I search for a list of hybridized music forms and end up watching/listening to music videos—Yeasayer, Anohni, and Patricia Majalisa, among others—for over an hour). In addition, the integration of world music into the digital mainstream has impacted popular music profoundly, prompting it to evolve as an art of synthesis and toward more globally representative sounds (are people familiar with Anohni? A quick search reveals a limited number of (fan and critical) reviews).

This emphasis on hybridization, at least in the US, is by no means a novel orientation. We’re a culture that has long been responsive to and rewarded what I’d call innovative derivation. The US is more a reformist culture than a revolutionary one, especially in political terms (30 minutes visiting various sites, a search that begins with the name/phrase “Thomas Jefferson” and concludes with me listening to the Seeds’ Sky Saxon accompanying Father Yod in what impresses me as quintessential 70’s acid rock). We teach and use the term American Revolution, but what occurred in the 1760s-1780s might be more aptly dubbed the American Reformation. Granted, as an emerging nation we had to war for independence, and many lost their lives in the struggle, but the new republic was not forged in sweeping resistance to governmental paradigms and systems that predated it (https://www.jesus-is-lord.com/kjcosto2.htm, http://law.jrank.org/pages/11900/Early-Years-American-Law.html, http://ecpmlangues.u-strasbg.fr/civilization/justice-systems-us-uk-france-comparison.html—then I somehow end up on a page reading Adrienne Rich’s “DivingInto the Wreck,” subsequently listening to Henry Rollins’s “Liar”). Rather, the founders drew from and reconfigured a number of sources, including Athenian democracy, parliamentary law, and the writings of John Locke. As I read the history, the US, from its inception, worked with more than against.

Goldsmith normalizes our technological dependency and rebukes the cynics, who often regard technology, and particularly the internet, as a destabilizing and distractive influence. Early in the book, Goldsmith defends our contemporary MO: “We’re reading and writing more than we have in a generation, but we are doing it differently—skimming, parsing, grazing, bookmarking, forwarding, and spamming language…” (4).

In a particularly poetic passage, paying tribute to the apps and devices that record our movements throughout the day, he offers:

The air above the streets is thick with our narrative transmissions uploading to far-flung server farms where, parsed and analyzed, they reappear on our devices. We walk and we think; we read and we write. The rhythm of our walking influences the pace of our thinking. In a rush, we run/walk/think/read/write frantically and obsessively; at our leisure, casting aside logic, we let our feet instinctively caress the sidewalk’s urban braille. (56)

A few pages later, he crafts a memorable passage in which he humanizes the internet spider, offering language that refurbishes our perceptions of the current age:

Casting the widest net possible, [spiders] trawl data, passwords, and media that are warehoused in distant servers with the hopes of salvaging something of value…Every move we make on the web is tracked, transforming our digital peregrinations into data sets. Truly, our online lives—intersections of flesh and machine—are daily feasts of extreme digital consumption. (61)

Goldsmith’s book reminds me of two other titles that I’ve appreciated over the years: David Elkind’s The Power of Play and Stephen Nachmanovitch’s Free Play: Improvisation in Life and Art. Both of these books, each in its own way, emphasize the importance of spontaneity, how free movement and association, uninhibited play, and organic explorations are part and parcel of a robust, expressed, and authentic life. Taking on the “cultural reactionaries [who defend] the status quo” (8), Goldsmith offers examples of how his children and their friends are every bit as social as kids from any other generation, albeit in their own, technologized way. Rather than wasting time on the internet or their various devices, if we’re defining “wasting” in the conventional sense, kids are in fact using technology to be “fully engaged, fostering an aesthetic, feeding [their] imagination, indulging in [their] creative proclivities” (14). He concludes, “Our devices might be changing us, but to say that they’re dehumanizing us is simply wrong” (7). There’s a natural fluidity to our technological maneuvering, a process that resembles the highest form of play and is integral to any scientific, artistic, or mystical pursuit. Much as with improvisational jazz, our technologically driven lives operate as nomadic solos and adventurous jams that occur within established structures and parameters (cf. Miles Davis, Charlie Parker, Thelonious Monk, et al). Our lives are both tangential and cohesive, linear and multidirectional, dispersive and productive. Technology leads us to encounter the paradoxes of our lives. The modern world is embracing alchemical principles in a way unseen since the years preceding the European Renaissance, albeit technologically rather than protoscientifically.

In one of my favorite passages, Goldsmith relates a story of several friends who are spending an evening together. They’re all mesmerized by “a giant peachy-yellow moon,” except for one guy who’s “glued to his phone” (83). Finally someone calls this to his attention, and he responds that he can look at the moon anytime but that this is the only time he can have this particular conversation. Goldsmith concludes, “His remark gives me pause. He’s right. Why is looking at the moon somehow perceived to be more ‘present’ than looking at your phone?” And a couple of sentences later: “It struck me that as much as we were in the moment, so was he” (84). Implicit in Goldsmith’s assertions is the notion that the internet is cultivating a certain and collective nonattachment. The technological age may be fostering the kind of depersonalization the Buddha spoke of 2500 years ago. Not to over-glorify a certain group, but Gen Zers and Millennials seem to “live and let live” more ostensibly and with less effort than Gen Xers and Baby Boomers. Indeed I sense this when I’m visiting college campuses or spending time with people in the 16-30 age range.

Goldsmith is as much a quasi-activist and performance artist as he is an author and poet. His work—from “Printing the Internet”; to his classes at University of PA, including “Uncreative Writing” and “Interventionist Writing”; to his mammoth Capital, an homage to NYC and its history presented entirely through collaged quotations, a book reminiscent of Walter Benjamin’s Arcades Project—consistently operates as intertextual, inter-referential, and cross-informative. Wasting Time on the Internet complements and furthers Goldsmith’s multifaceted (textual and social) mission. Speaking to the future of poetry, he tells us, “…poetry escaped out the back door and onto the Internet, where it is taking on new forms that look nothing like poetry” (189). The poetry of the future will be, perhaps, data-driven and curatorial: “This accretion of data is turning us into curators, librarians, and amateur archivists, custodians of our own vast collections” (24). And: “The vast amount of the web’s language is perfect raw material for literature. Disjunctive, compressed, decontextualized, cut and pastable, and, most important, archivable, it’s easily reassembled into works of art” (83). 21st Century poetry is poised to bring to fruition the modernist and postmodernist agendas, the actualization of manifestoes issued 75-100 years ago.

Wasting Time on the Internet is, finally, a statement of cultural, philosophic, and anthropological optimism. Goldsmith essentially asks: why be overly protective of fading norms and reject the defining resources of our times? Why be suspicious or dismissive of the current age’s artistic iterations? Why doubt the fertility of the 21st Century zeitgeist or the organic and ever-adaptive creativity of humans? Throughout history, it’s been the art that succeeds at channeling the perennial through contemporary forms that has emerged as seminal. What we express and how we express it, Goldsmith might suggest, are simply aspects of the evolutionary process. And that’s something we can celebrate.
Posted by X-Peri at 2:49:00 PM