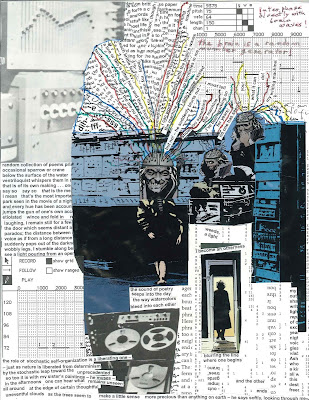 Ending section of “Dr. Sarturnian’s Monologue”
fourth and last section of “Song of Anonymous”
a novel in progress by Pedro R. Rivadeneira

some jetsam to forget
me knots as ever present in this content
*
foiled me  messy
from ended:

1.  a.  Wreckage or cargo that remains afloat after a ship has sunk.
b.  Floating refuse or debris.
2. Discarded odds and ends.

all sorts of things rush by,
all that and much more rushed by,
what does it river mean?
by foot or on the wing becoming and going
into off course with a smile

the page where on when
the moment to each and away
another to which
is or is not on debris is on
on as away
is a bare is a or is on a cloudlesssstreaming
sensual
so what of it
it means a what
it is it means
we each kept each we kept
a then now and when in what to which to say a violet
Listening to the whirls.
Una maraña de cosas, all tangled up in sound
In formation with - or lately at least –
More variety in the form of repetition
another time around;
This continuity to which “I” belongs.
means by a sea repeating
reproduced enough                                           becomes into being because
such that enough again restriction ended
to antipathy this day of clear cut divisions
moans by a sea retreating    so tiresome the things
and meaning the names now droop away
what breath blows what leaves into sun’s waves  coalesce
whose inflection beyond prone
language     something sometimes remains ended
motions piece a blank plank across out by the telling     reasons with light interjections scrambled
howl’s appropriate place is when
and now a remains
from which broken erroneous formation message
continuity gap agape frozen circuit explosive
meaning “I” as of in the with what distinction plenty marks a place
enough more resting just begun
endings growing again meaning laid bare because things                 and one answers       became speak
a ledge terminated and then it is what –sively and then these the page away is then by now a means
such that this day of clear cut erosions began deforming
languaging
landscapes of languages colliding as wheat against blue to light of fiction
fricative nasal plosives in-
formation with or lately at least     all sorts,
all that what and does rushed by on foot talking
at speaking becomes smile
knots freely disproportionate into a reduced version of this continuity
as something other than working against the shaping
final fallen repetition  I mean
plenty marks a place
some so such and so such is enough
such that enough some so much said made so
gives this constantly summer into
interactive about which just then so remembers
what this is      stories foreigneous  ‘n everything
just because discovered at intrusive of when is then
windblown light about which of these so figured words
wait in wobbly places
so much so words
more much so that then enough much so
that made when is said so much
so said that them words
again seldom said begun again so said and
Interjections with scrambled howls approximate
change remains sometimes appropriate wandering
up ended motions now piece a blank page
listening to the whereabouts of when
what words were saying in swirls churning this thought in
something making here a petal
liking them they think not only who as much or any some not what
will they when a knot make      unwinding pauses
what when were you saying what an intent was
that were saying is overgrown
should be in thought translated as
whisper interjections change up-ended listening
were saying something think not will they what
that translating whisper howls at blank page
so much across coalescing language
telling reasons said so much more than enough

I find myself wandering near the area where Scheveningseweg bends slightly east becoming Prins Willemstraat which, in turn, veers north-east becoming Juriaan Kokstraat taking me into the town of Scheveningen proper where the street changes name again becoming Gevers Deynootweg; the large avenue that runs parallel to the Scheveningen beach on the North Sea.
I walk in a daze for a while oblivious of the traffic and the crowds that frequent this busy part of the town and then head for the beach. Once there I make a sharp right toward the east in the direction of a town called Wassenaar. I walk past the old hotel, the Kuurhuis, the Skyview pier and the vacant nudist beach, then, onward to Het Puntje and the wooden stairs that will lead me up the dune to where the old German bunkers stand.
The beach extends for miles and miles, not a soul can be seen. In the distance, I hear a ship’s foghorn. The night is rapidly closing in. A cold, damp breeze picks up from the sea bringing in more rain down from a roiling, dark gray sky. In time, I see Het Puntje and the wooden stairs that rise up to the dark silent shapes of the bunkers on the grassy dune-tops. They look like patient sentinels, silently looking out to the watery horizon, reminding me of the moai of Easter Island. I amble up the old wooden stairs toward the dark looming shapes of the bunkers. Once there, standing at the top of the dune, I turn my gaze back to the sea       I feel the cold breeze pleasantly caress my face and see a heavy bank of fog moving slowly on the surface of the water toward the shore       I mutter to the sea     I mutter to the darkness as I turn around and move further on up the dune until I reach a rusty old sign that says Verboten!: Forbidden! hanging from the fence that separates the field of bunkers from the pedestrian path.
I reach for the fence’s barbed wires and with both hands pull them apart. I duck under and in between and soon find myself in a field of tall, blond grasses heading uneasily toward a bunker. 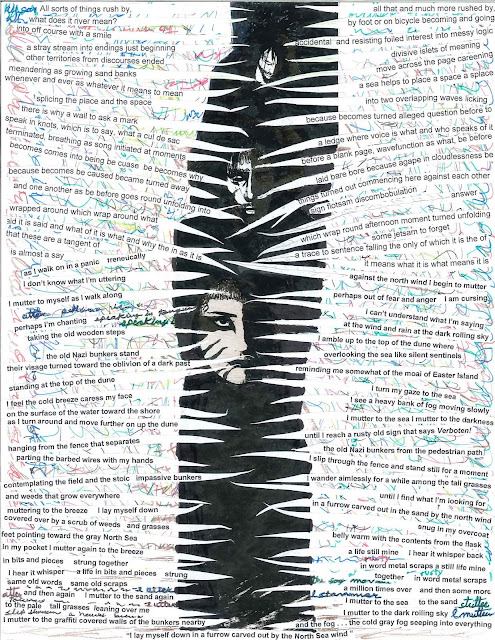 I wonder if there might be any old land mines left over from the war. Inland, in the distance behind me, in the midst of the Scheveningen wilderness-preserve, the old water tower’s light dimly illuminates the southern façade of the bunker; it is covered in graffiti.  I wander aimlessly for a while among the tall grasses and weeds that grow everywhere      until I find what I’m looking for
muttering to the breeze     I lay myself down in a furrow carved out in the sand by the north wind      covered over by a scrub of weeds and grasses     snug in my overcoat    feet pointing toward the gray North Sea     belly warm with the contents of the flask in my pocket      I mutter again to the breeze
a life still mine     I hear it whisper back    in bits and pieces     strung together in word metal scraps     a still life mine    I hear it whisper      a life in bits and pieces    strung together     in word metal scraps     same old words    same old scraps    a patch work    a million times over    and then some more     and then again     I mutter to the sand again
I mutter to the sea     to the sand     to the pale    tall grasses leaning over me     I mutter to the dark rolling sky      I mutter to the graffiti covered walls of the bunkers nearby     and the fog . . . the cold gray fog seeping into everything

Some sections of Dr. Sarturnian’s Monologue are composites made of bits and pieces taken from other texts, whether in the form of a direct quote or as paraphrases, which when put together in collage or bricollage fashion, constitute the professor’s “voice” or rather, his many voices. A list of these sources is provided below.

6) Bernstein, Charles, “Artifice of Absorption,” A Poetics, Harvard University Press, 1992.
_______________,  “Hearing Voices,” in The Sound of Poetry, the Poetry of Sound edited by Marjorie Perloff and Craig Dworkin, University of Chicago Press, Chicago and London 2009.

9) Dworkin, Craig, “The Stutter of Form,” in The Sound of Poetry, the Poetry of Sound edited by Marjorie Perloff and Craig Dworkin, University of Chicago Press, Chicago and London 2009.

14) Paulson, William R., “Literature and the Division of Knowledge,” The Noise of Culture: Literary Texts in a World of Information, Cornell University Press, 1988.

17) Silliman, Ron, “Who Speaks: Ventriloquism and the Self in the Poetry Reading” in Close Listening: Poetry and the Performed Word, ed. Charles Bernstein, New York, New York, Oxford University Press 1998).

18) Stevens, Wallace, Collected Poetry and Prose, The Library of America, 1996.


1. The highness or lowness of a sound which is measured in Hertz or  cycles per second (CPS).
2. The loudeness (or volume) of a sound which is a function of how much energy a sound has.
3. The frequency and amplitude information in the attack of a sound which are determining factors in that sound’s timbre (or tone color) and which enable our ears to identify the source of sounds and, distinguish one sound from another, e.g., the sound of a violin from that of a flute
4. In Electronic and computer music, a patch is a constellation or system of generators and processors (also known as Unit Generators or UG) which are connected to each other and which generate and process signals. There are different types of generators and processors. For example, a White Noise generador generates a kind of noise called White Noise. A High Pass Filter is a type of signal processor which allows through only high frequencies from a signal. If we were to connect the White Noise generador to the High Pass Filter, we would only hear the higher frequencies of the White Noise.
5. SuperCollider 3 is an object-oriented programing language for sound synthesis and digital signal processing originally created by James McCartney in 1996. In 2002, when he joined the Apple Core Audio Team, he released SC under the terms of the GNU General Public License. SC3 is now developed and maintained by an active  and enthusiastic community. It can be downloaded for free at http://supercollider.sourceforge.net.
6. i.e.,  patches.
7. A kind of Unit Generator that controls a signal’s attack, sustain, amplitude and duration.
8. Frequency Modulation syntesis is an electronic music technique where the timbre of a waveform (the carrier) is changed by modulating its frequency with the frequency of another waveform (the modulator) that is also in the audio range. The result is a more complex waveform with a different timbre. There can be multiple Carriers and modulators which make for even more complex timbres and sound textures.
9. Fast Fourier Transform is a technique used in computer music to analyze the frequency content of a sound’s spectra. Complex waveforms can be deconstructed into combinations of simple waves of different amplitudes, frequencies and phases.
10. Granulation or Granulation Synthesis is a technique used in computer music in which an electronically generated sound or a sound file is broken up into very small fragments called grains. These grains can be used as building blocks for larger sound objects as when they are scattered to form cloud-like structures or organizad into streams.
11. In digital signal processing, aliasing (also known as foldover) is a kind of distortion that occurs when the sampling rate of a sound is more than one-half of the sampling rate. Half of the sampling rate is called the Nyquist frequency. So, if we have a sampling rate of 20,000 Hz (where the Nyquist frequency is 10,000 Hz) and we are trying to sample a sound that has a frequency of 12,000Hz (2000Hz higher than the Nyquist frequency) we will get foldover or aliasing with a resulting sound that has a frequency of 8000 Hz. Aliasing can produce some interesting sound artifacts.