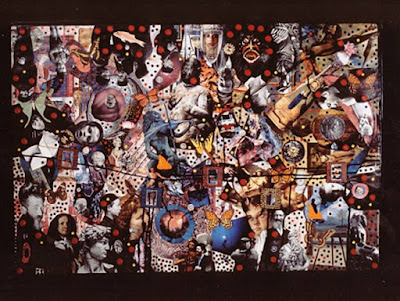 The Disappearance of Gabriel,
mixed-media collage by Daniel Y. Harris

During the night without notice or even much noise
the Congregation Gabriel Synagogue was gone from
across the street. The old-script gold letters on its frontispiece
gone, only their shadow still visible on the arch under my window.
Next day the brick arch was gone too and all the bricks next day.
A fence surrounded the steel-beam skeleton. A poster on the fence
announced the coming of something that looked suburban,
a cluster of apartments with a tiny park, followed by the company’s
name and number. I want the gold letters G, I, and A.
They stand for Gabriel who helped me move in, Ina who helped me
move back into my body in the new city, and A for my own name.
It was the old Gabriel Synagogue that persuaded me to live here,
it was a point of reference, I get easily lost, and a site for the hopeless
thought that one day I might go to an old schul and read the Torah.
I have a right to those letters, Mr. Developer. This poem is a warning.
Tomorrow I will call and it will be the prophet himself speaking.

I went to my Starbucks on Austin. Woe! A whole wall was gone
opening into a a brand-new Target store.
It happened overnight at the same time as Synagogue Gabriel
vanished. Some kind of tit-for-tat goes on in Queens.
This isn’t growth, it’s the sea of my haunt live suddenly with fins.

is there an unframed elsewhere?

oh medicines under a bush like 50s spy microfilm!

an alphabet longer than Audubon is a certainty