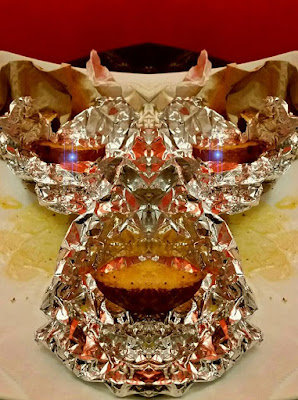 Hesitates to follow a comma into a mute alley
alone—always keeps a bodyguard at his side.
Frequents singles bars, hitting on An or And-y
to protect him from being mugged by declarative
sentences. A verbal coward, yes—but Heeeere’s

Namby! Too noncommittal for online dating sites
like Zoosk or Christian Mingle—Namby has his
own matchmaker, a wisp of alas, named Hyphen;
who, knowing he’s too weak even for a wuss like
Bambi—always hooks him up with his true love

Wondering what it is about bulls that led us
to choose their excrement to build the most
explosive metaphor in our language? Why
not rat or snake shit? Is El Toro dishonest?
unreliable? Aren’t such epithets themselves
Bullshit? If the criterion’s the size of the turd
wouldn’t elephant shit be a far better choice?
Not up for a sniff, but does a bull’s shit smell
worse than the crap of other beasts, including
our sapient selves? Worse than 1st runner-up?

Le mot juste on steroids when you’ve no idea
how many birds, bats, or butterflies you saw,
but want it to sound BIG. Pound counted on
our knowing it meant 10 thousand when he
understated WWI decimation: There died a

Myriad (read: 10 million). Now, chosen largely
for its glorious sound by poets mindless of the
millions who have perished—heap upon heap.
Even more poetic—those 5 fragrant syllables
such troubadours adore. Not a festering lily, a

If that word’s giving you a hard-on, go away.
There’s a titmouse at my woodpecker feeder
dining on dried nuts & cherries. Don’t titter.
There’s nothing to smirk or leer about here:
just a shy, tufted bird—ornithologists call a

Tit. That’s its nickname, stupid. Please go away.
This is a family poem—not meant for pervs like
you. Get thee to a strip club or house of ill repute.
This poem is for ethereal creatures: bird and bat.
Be off with your vulgar T-shirt—and disgusting

We all know what a stroller is—right?
You strap your infant in and you’re off
to Central Park. But if you’re a literati
you’ll find Bill Empson’s ass on a park
bench as he searches for ambiguities in
Stroller. Not likely Bill will find all Seven.
But he’ll easily come up with Number Two.
A “stroller” is what rappers call a “ho.” So:
That toddler you push in your stroller today
may cause you sorrow—by being a stroller

Say this and that—but who “they” are nobody
knows. Our feeling towards these soothsayers
is ambivalent. There’s a touch of skepticism
when we quote their assertions—though only
an autodidact completely ignores everything

They say. After all, they say there’s strength
in numbers—and theirs is a vast committee
devoted to self evident truth. So unless they
say something preposterous, I say go along.
They say 50,000 whosiewhatsies can’t be