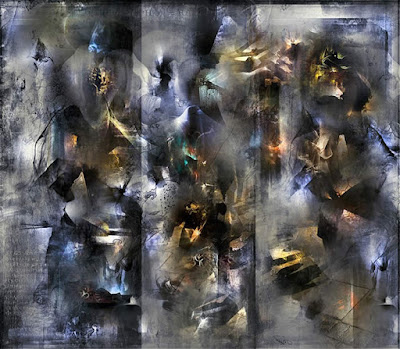 Darkness burns mazes into the avenues where your solitude nests, unveiling the youthful siblings of uneasy inventions, seductive ciphers and vague spyglasses whispering endearing phrases... the cello attracts rival veils and slips of the tongue.

Your presence is deceptive, a garden of delirious stains.

The invention of night, the ageless question of impossible balance, the pilot’s daughter eating crystals: To fill the world with light, the void with imaginary bodies glowing in the dark...

She has not been spoken of for many years, she is mything vitreous and tapping pawns for tallow, she is quickening her fluidity, to divert and disguise. Light poured into lacerations the way shadows enter clothing, for only a moment, or two, only a hidden space. A translation, for throwing phantoms into invisible walls.  She is myth-ratcheting amorous, chiding brutal structures for mountainous beckoning, to corrupt with pleasure.

The glow between living and ceasing to live, emulates the long-legged cascade in her whispering circuitry, the gaze of rain is corrupted film, caught in the act, disguised by pleasure purring in gradually brightening passwords. The catapult of an unfinished sentence, turned to provoke, to stroke and latent in state, the light separates your body from its own darkness.

The perverse pleasures of the captured bride dove-tailed in the mathematical equation of the city held up for example by the stars.

The scorpion-headed mannequin, your shadow striking inward for contact with the natural world. The empty animated gloves shaking out contentment in the garden, eyelids of entropy emitting seeds and slow rituals…

Dark gravitational assignations seduced into amulets the color of glass, evolving in sequential chiaroscuro, tempting blood where (in the Manor of Sighs) the barbarian sign language seizes the images of your being in the rich, antiquarian lucidity of your extinction. Your face, or the features of night in the fever of graceful spirits that still come to drink the liquid of life out of your hands, the pendulum... An evening of theater runs ahead...

Trapping belladonna between the lines, between her legs, between phases, to embrace the blindness of your murmuring, pushing out between her lips, the lost hermeticism of albino checkmates.

The weapon you most cherished was feminine. The wedge forced into the appearance of things was ambiguous with its dark insistence and wind‐up astronomy, clicking and whirring about in circles and broken up by triangles into long, interminable caresses that went on forever, imitating a newly discovered galaxy quivering in the nearness of wolves.

There is only the daughter of Icarus, without mirrors, the shadow of uncertainty that surrounds the ribcage of a philosophical paradox, only the stone of a primitive light, only the glance that hatches in the fire, the optical mainspring of a science that runs amok, only the ciphers leading the fossils of daybreak, and the glowing of those beings you feed each morning, the pools of blood dripping out of your dreams. Flight is only the body torn by light, powered by obscene gestures. A choreography of wish fulfillment.

There is always the diamond-cutter’s unremitting caress, always those great moths entering your eyes in a frenzy of unconditional attraction, clearing a space for the ermine of humor, and the misplaced objects of great value.

Among the various diversions and unforeseen discoveries, when the shallow end of a gesture foreshadows a long and hazardous recovery, and sudden landings in desolate places, it is your eyes most of all that appear as an interlocking resolution, or the honor among thieves.

The dark elopes, hydroplaning, self-eloping, shaping the ghost hunters. She lives outside of the hour light-embalmed within her shell and taken by the hand in secret. They double-side in a miserable silence. The cave that writes a reflection across your eyes. Deserted... In her divide is the rattle and the awkward torch of precise gesticulation. An unnatural dance among innocent victims. Cherished presence smeared on your face.