George Ttoouli, from does anyone know the plural of coda? 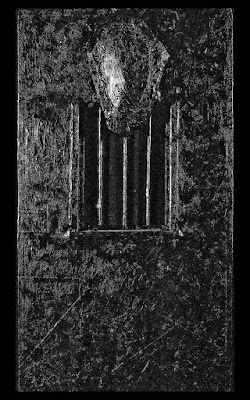 The Gate of Extinction, image by Daniel Y. Harris

from does anyone know the plural of coda?

if so, keep it to yourself
no one likes a smart arse
especially one producing more than 6 tons of carbon a year
YOU GAS MACHINE YOU SHITFLINGER YOU PLANETDESTROYER
with your business-as-usual face
your legalese fashion chic and your
in-the-closet diesel sexuality. believe:
there are no spaces left in the car park for you
uninfected by
your plane crash malaise—your stench
follows me into sleep.

take the corsets off your languages’ apologies
unmuzzle yourselves
but not like that.

no one said you were supposed
to do that.

the only thing worse:

you, when you leave the light on
in a room you’ve vacated like
you were never really present in the first place

does anyone know the plural of coda?

shut up who asked you?
with your petrol-eating grin
and your carboniferous hate-crimes

also for the record
you disgust me with your cravings
for images
seriously, what’s it like living
so deep in stupid?
you disgust me so much
you philosophical buttonbrain!

does anyone know what the plural of coda is?

because i really don’t care, even if
you got here using public transport and you’re wearing
vegan shoes—that means nothing

pebbles in the same stream are still
pebbles in a stream

all you’ve done is
kill the fish

is this beginning to sound like a pluralist coda yet?

i deleted all of them

(call it an allegory, if it helps you sleep
but i hope it gives you nightmares, shitwad)

that’s the new definition of environmentalism:
detechnologise your life

does anyone actually know what the plural of coda is?

when you cross a meadow
you shed apocalypses

have you ever thought about how many bugs you kill
spread out in a park
on a lawn
in your bed?

when you drive to work you exhaust
dictionaries full of expletives

there is a coda to this one
it was in my dream
the other night:

John Goodman, in a river,
on fire

Goodman, burning,
in slow moving
liquid
explosives,
coming at you
for a hug.

seriously, if you’re still thinking
about what the plural of coda is

you’re part of the problem

here’s a poem with full rhymes
and an image:

i lied
about the image
because you disgust me
so much

you disgust me
more than i disgust myself

still looking for a coda? Here: