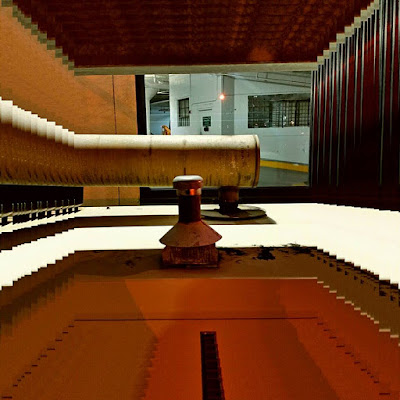 Ho|ma|ge to the Scat Warehouse, image by Daniel Y. Harris

Sheets. The only time our family went to
visit him he served drinks (water). When
I said I had to pee he told me to water the
weeds in his backyard. On our drive back
home Dad chuckled and beamed—That’ s
Freddy! Dad’s pal since 3rd grade, Sheets
was a legendary cheapskate. On a double
date, at a French café, he boasted I’ve got
the tip! The waiter ran after, yelling Mon
Ami! You need this plug neekel more than

That’s the best I can do yuh re the name of
the actor who will play the hero’s sidekick
in the umpteenth movie that will try to get
Arthur Conan Doyle right at last. It’ll be a
blast—but does anyone know who will be
Whosiewatson? Not that he’ll be as helpful
to Holmes as Horatio to Hamlet. Deductive
reasoning crucial for MDs, I wouldn’t want
his finger up my ass! Look for him soon in
NYC or Turlock—along with a brand new

Cory. I’m the doc who diagnosed his cancer;
told Dick he had 6 months to live. 5 minutes
later, he was with his lawyer, drawing up the
will in which he’d give: the royal riches you
so envied to Red Cross and Salvation Army.
Richard Cory–as Dead Man Walking–fooled the
jerks on the pavement. Not me. When the pain
got so bad he couldn’t walk downtown; couldn’t
even climb out of bed—doctor, friend, I slipped
Dick the gun he used to put a bullet through his

My interest here is in the friendly kind. I recall
my boss telling me a co-worker wouldn’t go far
due to a compulsion to tell on himself. “Randy
always lets me know when and how he screwed
up.” But does anyone but Randy relish friendly

Fire? Yet even enemy flames can be benign in
time. Arson destroys every tree, shrub, flower.
5 years later, back stronger than ever. Leontes’
friendly-fire failed—didn’t harm his daughter.
Never underestimate H2O — the buoyancy of

I’m sitting here in my underwear with a bottle
of Guinness and—whenever I drink the stuff—
I’m reminded I am not in The Book of World
Records. I must do something for the 1st time
(or better than anyone else) to earn a place in
Guinness. Don’t want to down one more hot dog
than X or swim a vast body of water. Need a feat
more sublime than gobbling franks, less stressful
than beating a record. An amazing Je ne sais quoi
(whatever). So I can float at the top of a Guinness

Everyone cried: they’re dangerous! bad!
So I shot one. (It’s hanging on my wall.)
So did Pete & Bill & Tom & Phil & Brad
& Dirk & Royce (even Barnaby & Paul)
to keep our wives and children safe from

Wolves. Suddenly elk feast with abandon on Aspen
leaves. Strip trees bare and once the grass is gone—
starve. Water spreads and evaporates, as river banks
erode. Until, behold!—the dry waterfall we, in our
ignorance, made. What do we call this spillway…?

Life, Sam says, is all about losing them
until you’ve nothing left but fragments
shored against your ruin. Here a snatch,
there a snatch—Homer, Horace, Virgil,
Chaucer, Milton, Donne. Your personal

Classics. Of course, not every one is as
hoity-toity as you. Millions haven’t even
read TED! (Hughes or Kooser.) Why be
smug? Why trash ’em? One day, they’ll
lose their classics: Justin Bieber & Kim