Jonathan Mulcahy-King's Resurrection Software, A Review of Eileen R. Tabios’ The Opposite of Claustrophobia 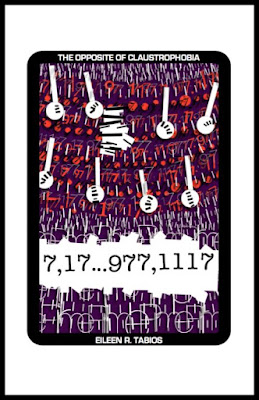 Book Cover for The Opposite of Claustrophobia, Eileen Tabios
The Knives Forks and Spoons Press, 2017

Resurrection Software, A Review of Eileen R. Tabios’
The Opposite of Claustrophobia
Prime’s Anti-Autobiography

The Opposite of Claustrophobia: Prime’s Anti-Autobiography is a tender blend of modernist, de-colonial and procedural code in which poet Eileen Tabios elegantly defies Plato’s prescient warning against the dangers of web-connected memory, and that relying too heavily on external memory (he was referring of course to writing at the time) would have irreversible consequences on our ability to remember.

I forgot because I thought it best to forget
everything rather than remember schemes
informed by my desire rather than what
actually transpired.

Defiantly, Tabios melds the computational with the haptic to create something refreshingly unique and politically poignant. In her explanatory essay ‘Babaylan Poetics  & the MDR Poetry Generator’ (Amnesia: Somebody’s Memoir, 2016), Tabios outlines her method. This is Tabios’ sixth collection (of an impressive 40 plus book career) in which she has utilised what she refers to as the MDR, or “Murder Death Resurrection” machine. The MDR is a database of 1,146 lines Tabios created from her reading of her previously published poetry in order to present poems that are not, as she writes, a product of conscious personal preference. Here, each line begins with the phrase “I forgot”, in homage to Tom Beckett. In doing so, each line in the book is representative of a memory and the book, itself a long poem, the act of remembering.

I forgot space is difficult to depict without the
negative grid.

The Opposite of Claustrophobia also hinges on what Tabios terms “Babaylan Poetics”, a poetics based on indigenous Filipino practices and culture, taken from the word for Shaman/ healer/ community leader, is an attempt to de-colonialize her Filipino roots through the manipulation of the English language and the restoration of a ‘sacred wholeness’. For Tabios, this is brought about as a result of the displacement (through cut-up) of English, the ‘enforced tongue’, and serves to relate the pre-colonial, spiritualist idea of interconnectivity—that seemingly unconnected parts have meaning as a whole. In doing so, Tabios de/reconstructs the English language as a kind of restorative Justice. This is key to understanding Tabios’ unflinching conviction that poetry can impact greatly on culture and our understanding of the world, as she writes (p.59),

I forgot Arthur Rimbaud who said the bears
are dancing but what he had wanted to do
was move the stars to pity.

Although Tabios creates an auto-affective method, she does not wish to stage her post-modern death, but be at play amongst the structural decay—while she increases the intermediate space between intention and action. It is significant to Tabios’ trajectory that she not relinquish full authorship, if such a thing is even possible (many artists and writers have attempted this, most notably Jackson Pollock, whose drip paintings have spurred much debate, as patterns form even subconsciously and as a product of muscle memory), instead, rather than a poetry of pure automaticity, Tabios’ is a meditation on what it is to remember, to be human…

I forgot we, together, formed tuning forks
longing for empathetic hits.

… and what it is to be a poet staving off ennui, and does so with bold complexity, and as a result joins the strange metaphysics of the cut-up canon alongside its key architect, William Burroughs.

I forgot how one can sag into night as if night
was a lover.

I forgot a poem with multiple references that
became whole through a scaffolding of jazz.

The Opposite of Claustrophobia then, is a celebration of remembering, as a haptic art, and speaks to an important facet in the evolution of personal and collective memory—that there are cognitive consequences of our ever-growing reliance on external memory (Smart 2012), and in this sense is a meditation on our tendency to remember how to find that information, rather than remembering the information itself (Sparrow, Liu, & Wegner 2011).

I forgot grabbing at my fading dreams only to recall a vision of skyscrapers crumbling from
the slaps of iron balls.

I forgot longing for a sky without horizon, but
acceding  instead to the eye’s  clamour against
the opposite of claustrophobia.

Having let this book’s ideas germinate for a while, it is clear that the opposite of claustrophobia is not agoraphobia, as logic would suggest, but perhaps the comfort of being confined, an embrace of the state in which one could feel constricted by the crush of societal and neurostructural schema, and that it is this comfort—of being confined to our memories and how we embrace this reflexivity between our personal and collective/ cultural memories that differentiates us in an age of overwhelming automation.

I forgot a lake capitulating with ripples from a
stone’s impassive penetration.