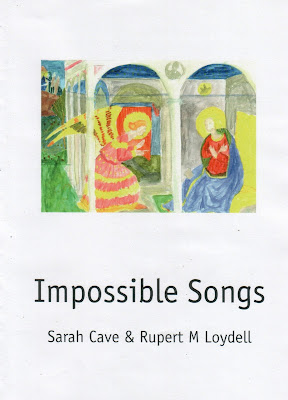 The book cover image is a study of Fra Angelico’s Annunciation.

Several months ago I reviewed Rupert M. Loydell’s twentieth collection of poetry, Dear Mary, which is a series of (far-ranging) meditations on the Virgin Mary and the circumstances of her miraculous conception. This follow-up, co-authored with Sarah Cave, is a series of “21 Annunciations,” using the same source-event, but presented in wholly different ways.

There is no indication of which poems are penned by which poet, or if they are all collaborations. This is interesting to me, because I recently reviewed another book of poetry, Blue, by Wesley St. Jo and Remé Grefalda that did not indicate which poet contributed where.

The annunciations in Impossible Songs are refracted through a wide array of prisms. “A Polar Bear Annunciation of Self” is a first-person poem from the polar bear’s point of view, interdicted with narrative from Barry Lopez, the environmental/humanitarian writer. This poem is followed by another with an Arctic theme. In the third stanza I was struck by an echo from the poem “Bright Flags” by Jim Morrison, wherein he says “There’s a belief by the/Children of Man which states/all will be well.” In the Cave/Loydell poem “Shadow Words,” the line is “she convinces herself/all will be will be well.” This would seem reviewer-centric if it were not for a poem several pages later, “The Impossible Song,” which quotes Morrison in its epigraph and then begins:

This poem is preceded by a poem “for Leonard Cohen” and followed by a poem called “An Annunciation of Christ’s Dark Matter” “after David Bowie.” This poem contains lines from “Ashes to Ashes” (“strung out in heaven’s high”) and other Bowie tunes and is darkly evocative, as Bowie so often was.

We now have as inspiration a triumvirate of dead songwriters who were all also poets. A few pages later there is a poem called “Tightrope Annunciation.” Perhaps this truly is tenuous and reviewer-centric but there is a song on Other Voices, the album recorded by the three remaining Doors after Morrison’s death, called “Tightrope Ride.”

Loydell is a painter as well as a poet, so it is no surprise that some of the annunciations are based on paintings, such as Edward Hopper’s Cape Cod Morning. The cover art is a study of Fra Angelico’s Annunciation.

“The Art of Silence” is three poems in one. The two columns can be read as individual poems or the lines can be read straight across to make one poem.

“The Deserted Garden” considers the first mother, Eve, who was pregnant, before Cain and Abel, with knowledge.

One of my favorite poems in Dear Mary is about annunciation as alien abduction. Impossible Songs contains a similarly themed poem titled “annunCIAtion,” which presents Mary’s experience as conspiracy theory. There are several theories therein of how she was impregnated (to which I add Roman centurion) and there is even a visit by the “men in black” (“secret agents or aliens”). Could the Pharisees and Sadducees been among their number? Or was it an infiltration?

“Notes on an Almost Annunciation” brings to mind Mary Lee Wile’s powerful novel Ancient Rage. While Mary and Jesus were made so much of, there was also Mary’s cousin Elizabeth and her son John the Baptist, who suffered much the same but didn’t quite get the press.

For readers who, like me, find added value in an artist coming back to subject matter again and again over time, especially when it is a single line or other form of bread crumb, the final line of the final poem in Impossible Songs is “The God-duck wore his Mitre at an angle in church on Sunday.” This line echoes back to a chapbook edited by Loydell titled The Gospel According to Archbishop Makeshift.

Speaking of chapbooks, along with Impossible Songs I received several quarter-fold chapbooks. Two in particular bear mention in the context of this review. They are point–counterpoint collaborations between Loydell and Peter Gillies and are titled “The Angel Gabriel is not Your Friend/The Angel Gabriel could be Your Cousin” and “Fra Angelico is not Your Friend/Fra Angelico could be Your Cousin.”

As evidenced by these three works, Loydell is mining themes that resonate with our times, leading to collaborations with a talented array of fellow poets, allowing for a synergistic pulse of varied views. He and his fellow travelers ask difficult questions and offer open-ended answers through the time-tested holy triad of ethos, logos, and pathos.

The grey space of possibility is one that more artists should commit to create in.