Jonathan Mulcahy-King's Transdimensionalism: An interview with the brothers De Gids 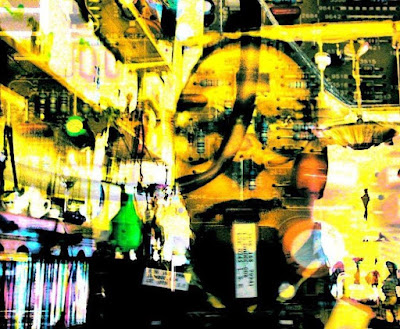 JMK. What was the first piece of experimental writing that influenced your current trajectory and how can it be seen in your work today?

BdG. Perhaps that would be Gertrude Stein’s “the Making of Americans” and the de Sades’ books which led all to look at (the loss of) narrative, radicality of topic and totally outrageousness of unconventionalism to be embraced by as well Bas’s imaginist skills (he liked Bacon the painter and Hieronymus Bosch and Céline and Malcolm Lowry the writers plus early on we embraced radical performance artists like Ulay and Abramovic and Gilbert & George and all sorts of anti-music like Eno, Fripp, Ono, Kraftwerk, John Cage, CBGBs punk outings and Laurie Anderson).

JMK. If your collective work were a music festival, what would the line-up be and why?

AdG. Involuntarily I already summed up the answer in the previous one. we searched always for the weird, dadaist, postneodadaist, situationist ad hoc performances for alienation never for enlargment of understanding, camp (Bas is straight I am gay we’re twins and we love shock and awe) but each weirdification is enhancement of the domain of references (or rather referencelessness)… genesis p. orridge and lady jay.

JMK. How would you describe the relationship between your respective works of writing and photography, is it, for example, reflexive, ekphrastic, asemic, totally isolated etc.?

BdG. It is Bas who coined the notion of “transdimensionalism” which expresses pretty much the overall scope of our works. consistency one would to have hard to search for. We like to switch styles every 5 minutes and corrupt our own esthetics also so there is rather a “relax it is only a crap Reena Spartings show” NY-Dutch-global anti-estheticism in the works.

JMK. Aad, your work evokes a kind of hyper-eroticism. Do you feel there are unexplored aspects of transgression in poetry, and how much stock do you as a writer put in “Bataille’s holy trinity;” excess, taboo, death, and how does this come through in your work?

AdG. I studied philosophy at university and always found the more radical versions, persons of post-Bataillism more interesting as Foucault, Baudrillard, Lyotard, Derrida, Deleuze-Guattari, Virilio, Luce Irigaray, Claire Parnet, Hélène Cixous. So this implies rather a more unsystemic rest of totally transgressive, transportational, domainless non-place where all takes place in constant dynamics against itself. This is also the case in Bas’s imaginist ‘works’ which he keeps corrumpating, developing, undeveloping, furthering, darkening and undefining.

JMK. How would you describe the current state of experimental poetry? Could you name some writers/ publishers that excite you/ trends you find turgid?

JMK. Would you agree that the propensity to extrapolate meaning and map discourse in experimental poetry is an extension of Wittgensteinian language games, or the rule- governed character of analysis and our auto-effective desire for meaning, and how might this relate to your work? How might we better discuss “meaninglessness” in poetry?

AdG. In the ’discourse’ of meaning in philosophy I rather followed (as also but not predominantly Wittgenstein) the Frankfurt Schule and poststructuralists as named above and as writers Marguerite Duras, Gertrude Stein, Kapielski, Cioran, Céline, Celan, Musil, Thomas Bernhard, Georges Pérec, Kathy Acker, Germaine Greer, all the philosophers I mentioned plus those of the Frankfurt Schule Adorno-Horkheimer-Benjamin-Marcuse-Habermas-Apel. For each time I search for the radicalest of escaping the narrativity and consistency in meaning. I love all distortionism and hybridizations in art as we see in Beuys, the photography of Helmut Newton-Guy Bourdin-Chris von Wangenheim and Cindy Sherman-Nan Goldin-Diane Arbus- Tracey Moffatt-Tracey Ermin-Stacey Kranitz we see in Andy Warhol-Madonna-Dash Snow-Gary Winogrand-Michele Sibilonis-Bertiglio. There is also the [non-movement] of 'oh this shoppinglist found under a shoppingcart at the parkinglot is poetry also’ esthetics to blow up the self-aggrandizing schools of whatever art.

JMK. My next question is in poetry form;


mux=ground=humus=plantrests=tar=shit=hubris=debris. it is as well abject as unabject bc just is as is. people shy away from it and think themselves couture, wallstreet, raja and ISIS bombbelter with her his death expecting virgins in the heaven. “I wanna be your dog” says the same: dogs, hyenas, cats and bears do not shy away from ground, shit, the pit, their tail speaks in voluminous and swaying iconology. I hope the toddler with vulvaic hair KimJongUn soon dies a horrific death.