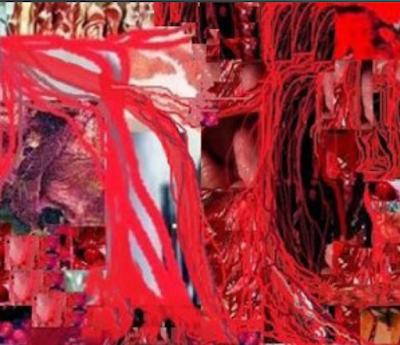 Flesh is silence, image by Younisos


Cut-up on deep throat in the sky

My own corpse is the path, translucent pattern of the bold paranoiac egg. Licking it
brings the absolute filth to any abstract steak.

Gutted nymphs crossing the street under the bright ax of aesthetics.
— Mister Giant Steak slaughters Vaïna in the sunshine.

Bonesodomise yourself. That’s the path.
Amen

How could I sodomize the light ?
Is there any enlightened delirious ass, out there, on the edge ?

Pale cannibal Danaé just slaughtered Clotilde, ate her fresh liver, and lay on my
ramshackle bed, showing off that round milk-white butt.

Just come and suck my marrow... only aesthetics will bleed me to death... I'm all sugar
for your twisted thirst... my liver going wild on the tongue of the final sensory
spectrum. Obaoba was a nightclub in Tangier, packed with fresh curvy meat.

A giant sausage moves on, crawling on the milky edge of our pulpy galaxy.
The asshole of the Milky Way is not a black hole, no... it's a big big real fleshy
anus, and it gets sodomized by bony silence.

Younisos writes what he calls “carnal experimental poetry.” He is the author of Carnage Sensitif, in French; and is now looking for a publisher for his new book in English: Carnal Flux and Sensory Slaughters. He lives in Tangier.
Posted by X-Peri at 5:25:00 PM