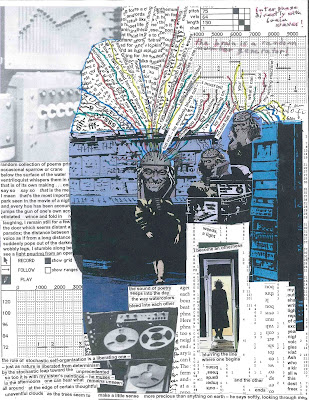 
An excerpt from Dr Sarturnian’s Monologue,
Section IV of Song of Anonymous,
(a nomadic novel in progress)
Pedro R. Rivadeneira

“Fundamentally, everything that is said is a quotation . . .”
Thomas Bernhard, Walking

Dr. Alan J. Sarturnian, old, retired, multilingual, multitalented scholar, philosopher, musicologist and composer, now dabbling in magic, alchemy, shiatsu and astrology. He now lives with his twin sister Helena, an artist of international repute, in the Nordeinde qwartier of Den Haag, in one of the old, prominent, four story houses typical of that area, not two blocks away from the Queen’s working palace. Collapsed into bitterness, his eyes never look at me, they move rapidly from side to side as if frantically searching for something. Rumour has it the Doctor had a nervous breakdown years ago and has attempted suicide several times, events which have forced him into an early retirement.

The old man is sitting in his study blankly staring out the window with cigarette in hand. The room is saturated with smoke. He is a short, thin, wiry man of dark complexion. His hair, now mostly dark gray, is longish and scraggly, arrayed in an unruly mass around his prominent forehead and temples. He sits next to an ancient oaken desk on an old, oak office swivel chair that squeaks when he moves. The desk is piled over with books, papers and empty bottles. Several ashtrays lie about brimming with ashes and cigarette butts. He’s wearing a wornout terry cloth robe in a faded navy blue color spattered with food stains and cigarette burns. His scrawny legs are bare with the exception of a pair of thin, shin high socks and his feet are encased in a pair of worn out felt slippers, also dark blue in color. He shuffles his feet restlessly on the littered wooden floor as he sits facing the studio window through which can be seen bare trees in the darkening yard behind the house. I have come to see the old professor, with whom I studied years ago, in the hopes he will help clarify my doubts and dispel the crisis I’m in.

most consider information that which is expected    that which is only uniquely defined    while on the other hand   random and unexpected sequences of events come across as uninformative    confusing . . . in other words    by information    most people want to mean the message actually sent   its expected   specified order   as opposed to a chaos of possibilities which is more likely the case you see . . . in actuality    it is in this ambiguous informational environment that we rapidly flicker on and off   we exist and cease to exist and in which they   the Editors   thrive . . . just as we find in other types of systems   say   thermodynamic systems  which contain within them    depending on the observer’s viewpoint   patterns which can be characterized as orders and disorders    so too it is with systems of signification like language and the particular expressions associated with them such as  the various kinds of speech and writing we engage in    why    our speech is a collection of noises     plosives   nasals    sibilants  and so on   before I can utter a thought   a swarm of thoughts snake around in my mind with no idea on my part as to where they come from   perhaps they come to me from a source beyond myself  like transmissions – he mutters - of course the writing    the text itself   lies in an indeterminate area as well   somewhere between subject and object    it is neither object nor subject    not an object as such   yet still   it is one given that it is in the world so-called     by the same token however    it is not quite a subject either     at least not yet   not until someone has read it and internalized it and by so doing has begun an intersubjective relationship with the text   its writer and other readers    the text and the writer are a kind of locus   a kind of node   through which an intersubjective web is spun   actualized    the writer a spider at the center of its web    the text is in the process of weaving   in fact subject and object come together in the very activity of writing   the activity of writing and the text written are the locus in which both subject and object meet   there is no distinction between one and the other when one is writing   when one is giving one’s complete undivided attention to the writing   am I making myself clear enough for you boy? – he asks mockingly and begins to giggle then rapidly flicks his tongue in and out like a reptile testing the air, and as he speaks, I seem to hear another voice in the background, in the back of my head perhaps, a mumbling under the breath as if someone where dutifully reading words from a text. At times it seems I hear a swarm of voices that match the movement of his lips perfectly while his louder single voice seems out of sync. Startled I stumble back toward the wall behind me, he looks up smiling knowingly and says

Some sections of Dr. Sarturnian’s Monologue are composites made of bits and pieces taken from other texts, whether in the form of a direct quote or as paraphrases, which when put together in collage or bricollage fashion, constitute the professor’s “voice” or rather, his many voices. A list of these sources is provided below.

14) Paulson, William R., “Literature and the Division of Knowledge,” The Noise of Culture: Literary Texts in a World of Information, Cornell University Press, 1988.

15) Stevens, Wallace, Collected Poetry and Prose, The Library of America, 1996.