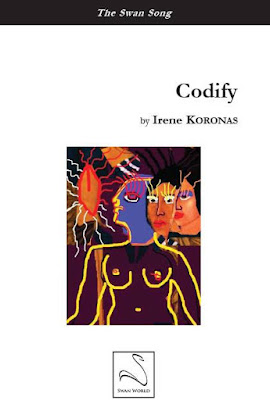 strip instead of seduce

Koronas marries this with an almost ancient lyricism, culminating in such a way as to affect an overall anachronistic sensibility where imagery both common and esoteric are jettisoned about the place tethered to shapes like a work of modernist art; here, jagged lines and bold colours are replaced with a lexicon as refined as it is seemingly cut-up, as nuanced as it is elemental—this is the crux of Koronas’ experimentalism; what some refer to as post language though is perhaps better expressed as the simultaneous embrace of a litany of technique and voice, a heightened sense of craft Koronas executes effortlessly throughout. Unlike many so-called post langauge poets, Koronas embodies this approach so fully, so vibrantly,  she rises from the ashern deathbed of postmodernism carrying her own unique tune;

to spurt
Koronas’ deeply erotic-trangressive work is far from trite retromanic pastiche echolaliac of the last century, rather, it is unconstricted by what, as Koronas writes, can be seen as an ‘extra laconic hypersexual skin’ (18, p.49), breathing life into what is now ostensibly a fringe form—often dismissed as theoretically fallow in a post-psychoanalytical landscape. By excavating the bones of figures like Bataille, Rimbaud and de Sade, Koronas’ archeology finds a powerfully feminine, post-beat voice that resounds with a modernist almost Pound-esque sincerity, conjuring such lines as; ‘when hips fall over her face petticoats his head his mouth on her green lace dress spit on his stamen’ (49, p.36); ‘in web stretch a terra cottar pot at the bottom of my skirt’ (40, p.50); ‘swipe his waist squash his cum blow her cuntif cool’ (47, p.126); ‘hike up your spike you nasty whore master who rebels in my mouth’ (1, p.26), and ‘univited fist thick with mucus tight genes imprison to bruise’ (87, p.53).