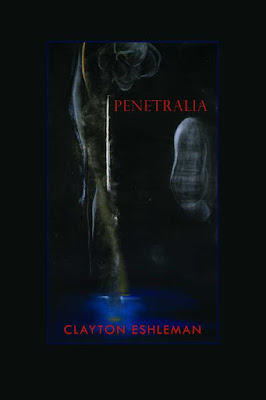 According to the OED, the word penetralia means “the innermost parts of a building; a secret or hidden place.” Clayton Eshleman, who recently turned 82, has taken this word as the title of his newest collection of poems touching on themes including mask, violation, myth, psychospirituality, conspiracy theory and more, intertwined with poems and passages nostalgically recalling or addressing beloved poets, persons, himself and his wife and editor, Caryl.

“Reface me. / Deliver me from this shotgun blast mess,” Eshleman writes in the prayerful opening lines of his opening poem “For Connie Culp.” As we learn from both the poem and an endnote, this is a powerful real-life story. Ms. Culp, after being shot in the face with a 12-gauge by her husband, went on to become, in 2008, the first U.S. recipient of a face transplant. In contrast to the cruel act perpetrated by her husband, is the healing and restorative refacing performed by surgeon Maria Siemionow who led a team of eight doctors in a 22 hour operation, replacing more than 3/4ths of Ms. Culp’s face “with that of Anna Kasper’s, her donor.” Eshleman plays with sensitive details as he asks, “Will her soul reject her mask?”

The act of being shot in the face with a 12-gauge by one’s husband is also an extreme human-to-human violation. In these poems, Eshleman explores this theme in various other ways, including rape and warfare. “Oil Spill” (13 May 2010) addresses, in an explosion of color and texture, human-to-nature violation. “Dolphins,” “islands,” “pebbles,” “marshes,” “waves” and the “roan static sea” itself are all colored and slickened into “beauty-lewd eco-horror,” until we arrive at the poem’s coda, which weaves the concrete and the abstract, the real and the mythic together:

For how brief it is, “Oil Spill” holds more than it seems to on a first, a second or even a third reading. It has, as does much of Olson’s work, an intense, slow burn impact.

The poem “Tree Roots and Trunks” (For James Heller Levinson) combines self-to-self violation with the mythic. This poem, which takes its title from a painting by Vincent Van Gogh, is set in Auvers, in July, 1890. On the 26th of this month, the artist shot himself. Eshleman describes Persephone as being in command of “Vincent’s brush hand, / drawing him down to confront the fusion, / never achieved in painting.” The first line of the second quatrain finishes out the idea, “Her clitoris, when he dared to touch, felt triggerish.” This poem plunges headlong into the Eleusinian Mysteries of a troubled and creative mind, “A blue corm with three lidless eyes was staring at him, / a face now masked with twigs.” The artist wonders, “am I just like a planet, or a paralyzed star?” The poem replies that both artist and art are “Vaginal blast of the son shot back.”

Yorunomado is a mythic totem character who carries over from previous works by Eshleman. In this collection, Yorunomado first appears in its second poem “Posthumous Mask,” and then again in its fourth poem “Mandalizing,” (comprised of four letters to Anne Waldman) in which the poet explains, “I constructed my own guide, Yorunomado, out of the name of a coffee shop where I translated in the afternoon (Yorunomado = Night Window), & a… photo of a Sepika Delta head hunter sitting on a reed bench looking at a skull.” The poet created this character at a moment when he was unable to move forward with his translations of Vallejo. Thankfully, Yorunomado guided him forward in a visionary way then and continues to do so now.

“Mandalizing,” a reflection on the soul, also contains the aspect of psychospirituality and is impressive for the way it brings together Iranian Sufi Gnosticism, Tibetan Buddhism and Jungianism. Eshleman is bookish poet in the best sense. His knowledge of these various psychospiritual realms is obviously considerable, and still he never seems to make a merely decorative reference and, in the glut that is a hallmark of his work, he never overwhelms. Bookish reference after bookish reference clearly remains the material the poet is using to write what are clearly poems. This poem also demonstrates how textual appropriation, which is a method Eshleman uses throughout Penetralia, can be used artistically.

Visionary imagination prevails in a number of these poems. The final lines of “The Eye Mazes of Unica Zurn” provide a striking example of Eshleman’s visionary poetics, even as they touch on both vision and Zurn’s visionary artwork:

I watch Unica pupilize, puppetize, then flea bait her range.
I note the rotary palimpsest of all men inhabiting her facial levers,
motordrome cylinders on whose vertical walls eyes cycle defying gravity. Moon of cratered nests
in which eye spiders drink her strength.

The image of the face/facial is present once again in these lines, while words such as “rotary,” “cylinder,” “cycle” and “moon,” not to mention “eyes/eye,” all drive the idea of roundedness.

“Wound Interrogation” offers an example of how most of the above-mentioned themes can be intertwined with conspiracy theory and transformed into poetry. This poem (which first appeared in X-Peri, January 10, 2016) also takes its title from a painting by the Chilean artist Roberto Matta. The conspiracy theory referenced here is, at this point, a common enough one about “The suppression of the horrifying truth of the 9/11 assault (more appropriately referred to as “The Pentagon Three Towers Bombing”).” In Eshleman’s estimation, this event “is, like an undiagnosed plague, lodged in the American subconscious.” All of this emerges in startling contrast to the precise imagery and extensive and deep knowledge found throughout these pages. Does the poet have a truly visionary insight into 9/11, which has certainly wounded the American soul?

For all the wide-ranging and intense subject matter the poems in Penetralia contain, this is by no means a disjointed or despairing collection. Two years after the publication of Clayton Eshleman: Essential Poetry (1960-2015), this poet is doing more than avoiding sentimentalism and the hazards often associated with late nostalgic recollection. His work continues to be visionary and vital. Eshleman is unmistakably adding to his essential oeuvre and inviting his readers into “the innermost parts,” the “secret or hidden place” of Poetry.