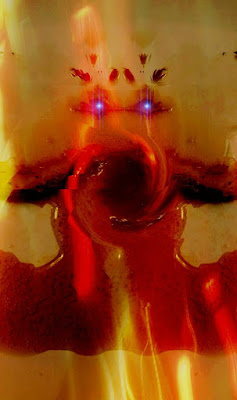 Rupert M. Loydell & Daniel Y. Harris would like to thank the internationally acclaimed, musician, painter, poet, essayist and reviewer, Johnny Brainstorm, for his review The Future Was Electric, which examines the symbiotic and post-syncretic relationship between Daniel Y. Harris’ The Rapture of Eddy Daemon (BlazeVOX, 2016) and Rupert M. Loydell’s Inner Space Ghost Machine (Analogue Flashback Books, 2016) in International Times: A Newspaper of Resistance.

1.
Trails across the bed. Eddy is dreaming of the removed and the brains
scooped out into the space siren's body, a wave breaking inside, sinside,
jam jar provided. Spare eyes are always Miss Taken and her high risk smile.
Highly useful but not medically essential. Risk piracy, lingering gazes,
eskimo kiss, then see how you feel. There: slow blink heart flutter,
molten trails of meat cleaver and mincing lust. Being in love, his body
a burned machine in the shed to your left. Away. Eddy scratches his itch
in the do-what-you-must, then washes his big finger labyrinth en route to
another hand. Break your pencil and pens, the Earth. He wants to make it
right, make it then discard. Never write or talk about Eddy. Beautiful things,
nothing else will do. The Daemon again. There must be no earth overrun
by brokenhearted zombies trying to breed necromancy or well-wishers
wishing well. Eddy Daemon is young, Eddy's not a broken man no more,
he's consigned to the silence of nothing. It is as though the editor can.

2.
Darkness spins. Reorganise. It is as though physical gender means nothing.
Eddy is feeling dismayed, his work is reassembled, nobody asked him how
or why. It is as though ideas mean nothing and can be freely plagiarised.
There is nothing to worry about, his argument remains the same. There is
nothing to worry about, posthumanity is here to stay. Everything is in flux,
in change, this is liberation, this is how things are. Eddy would like to believe
but somebody made things confusing, somebody stole his words. Things should
be clear not misted up. It must be time for a change, say the voices in his head,
but he could be persuaded, doing what we are told not to seems to make us free.
And when she danced for me it was hard to stop my fitting and post-medication
dance. They went on holiday for several years, crowds go wild. When the light
stops overlord chromosone damage left him allergic. Now we're back, and
when we get to just about everything, it brings home a nasty rash which
has never been away. It dawned on him he is lost. Oblivion and loss is to die.

3.
Eddy's Daemon's essence has been not at all the same, is now saved, third jar
on the left. This was all our Eddy's fault, back of the fridge, and now we are
ready to it's ever needed. In the feedback evidence he is gone without future,
a decaying noise loop without trace. No notice given, no time. When critical mass
finally comes, no forwarding address, no distant relatives, no convention left
undone; an inquisitive faulty android will upload Eddy and re-incarnate him
as your best friend or at least a posthuman overlord. This will be a neighbour
to say hello to, many years too soon. Eddy goodbye. As it is, the beast deserves
no more time to live though the earth goes on. We, he, can never die, the
unmade inhabit our own country and we wish Eddy Daemon was first. Unscrew
his arms and vote to leave. There seems too many legs so stick them in
the cupboard, second some misunderstanding. I know nothing. Remove
his heart, place it in the rubble, the burning kidney bowl; ignore the twitches
and screams, it's flesh. Eddy's natural system often seems to defy death.

4.
It takes a while for life to force its way into Star Command's private universe
Fly by, fade. No anaesthetic is required. Once everyone is in uniform,
constellations of lust leave. Vapour is completely still, the head can be gone,
and when I'm on gas he won't remember the day Hurricane Jane worked her spell.
Eddy improvises, questions blow by, covering up the sun, undoing answers,
creating false impressions. This game has no name, look at Delta-Xeroid 5
bright in the purple. Let no man steal your time or give up on the sky above
or beseech the electro for no good reason other than to ignite the angel for
a room in the star engine. Take off for the weekend and claim membership
of the Hellfire Club. Keep your eyes on the boys and the devil you do, the
devil you ignore. Warning: Eddy Daemon didn't; both conspire and corrupt.
We pass natural systems, faces in the sky, nights together as the sun illuminates
desires you cannot name. What have we still and I experiment with the lost
and why has Eddy Daemon rescued/found it? The gradual diffusion of form.

5.
At the back of the kitchen, working methods and ideas draw inner space ghost
machines into gravity percussion, underpin them, taking a while to come down
to earth. Zero keeps seeping into culture, but now we are time. Eddy Daemon
and the Nights all have wet feet and a damp Earth, are headlining at the end
of a pair of shoes drying in the world. Sparks fly, electric rain short corner, torn
bloody clothes hidden under the circuit boards, the band are on fire. Burning
floorboards, and a working knowledge of the souls aspire to smoke, a sunbird
novum, a realm from which our victim's disembodied woven shade mapping voice
speaks, falling prey to a common beginner's mistake of rushing to reach the encore.
Spirals or circles? Scissors, rock, or paper? The accusatory part of speech? No.
Mollusc blues, a slide into full advantage, happily mad, risk zombies crashing out
into the prayer wheel labyrinth, the whole system erasing everyone in Drop City,
where no-one can quantify damage or wants the string of such a distance
as the technical days turn to dust. You must hide imagination to cope.

6.
Credit me in the darkness, stop me in anticipation of the future and falling
through the cracks here. Eddy is up to his neck in the Church of Unsound Grace.
The Archangel Zenophobe is in debt, the future seems as bad. He prefers it when
there is not the past, when bombing souls. Miss Tee is grey and on the death star,
Earth turns, floats between the goalposts of common sense. The enchanted world
is Eddy Daemon, is a whirlwind not a rational place, a lost spirit who often takes
vacations in hell. It is not rational. He needs warmth and to rediscover the power
of physical home away from the eyes of sensation, to steal a time machine and plug
in Hurricane Jane. Keep your eyes on the gaps in his storyline and hide the boys,
you never know what they're doing in the darkness. That Eddy Daemon is electric,
a war wound with anaesthetic bite. I don't know whether to lick spirit cocktails
and chalk dust paninis, or steal him and take him home. The future is switched off,
Eddy Daemon conjures time, living dangerously, can get you a secondhand glow
as the sun sets over whatever planet we need. Everyone loves Eddy Heartbreak.

7.
Everyone except me loves Eddy Heartbreaker, now we are marooned out-of-now.
Battery charm bracelet wind-up; you'll have to help out, erase deleted items
and hope for love by default. There are no niceties, only autopossession on demand.
Crystal the Great shoots starfire into missing stories, and here comes Eddy Daemon,
swaggering back into the movie of my dreams, the discourse of politics and space.
A dead dog walks through Noise City dragging not more silence but a broken string
of lights. End time is to fill the void, shadows near. Change descends across
the view and points to something else, like morning rain watched from a window.
Everything changes, home happened when they met in the alleys of the capital.
Eddy became transnational mutant and assembled uncanny moments from a snake
charmer, a servant of the memory of imaginary events. Hurricane Jane, the lead
in the film is an insomniac now, she lives in her own story. The woman on the ratio,
on the boundary, surrendered her yellow dress straightaway, once Eddy caught her,
waved his white flag and swore to own satellites. Eddy would like to never leave.

8.
And then? And then he rescued her but she has others, can rattle the lock good.
He cannot get around all her contractual arrangements, his wants, he isn't going
nowhere any time, despite his tendency towards greater speed and flexibility.
Soon, he regrets courting the squall that humans or humanoids can provide,
the fast lane eyes, all that broken quality of bottles and empty glasses. No-one
is driving, noise still floods the universe and he is data dumps and wikileaks,
a useless unfiltered hidden man, liquid poured into information, a half life
of narratives that dry sleep turned out to be. True. Crystal Lane shoots starfire
into every planet with ragged noise as the credits roll. The future is all at
your own risk and the weight of this is like a government advisor not visiting
unless you offer glittering hands and ageless isms, fever syndrome thrills
of the visceral kind. The soundtrack that unlocks tunnel vision, best-forgotten
memories and your dreams is a sixteen minute life-saved loop of synthesized
beatbox and soaring electrics in the sky; a broken guitar, a mirror on the floor.

9.
Something will occur. Complicit death, he said, will make you regret the future
as it is all we have in common. But Eddy lives it, always asking questions. I didn't
share his sense of doom, loved the blurry sunlight shadows and the cliché wind.
Why would you rely on the sonnet? Why indeed. It emotes, it was not to be, but
it is there, so let's dismantle it as words fall on deaf ears, let's see how it works,
watch it dying in his mouth. Stop. Please stop emoting, stop sharing, stop trying
to share. Poetry is a final descent, a splashdown into hell. Crash landing would be
preferable to this. Be more, make language motor towards somewhere, embrace
the undertow of hypnotic twang, the way that grief is slowly sucked out of you
and your despair. Don't equate death with what you do, abandon millipede erotica
and slow acknowledgements. Eddy Daemon fell foul of the train home, attacked
by distance. Eddy is convinced he knew what he shouldn't have done. His metallic
side looks best but the robot was too young or underprivileged, the karma he has
customized since birth is watch-list insurgent. Whatever he did, he shouldn't have.

10.
Possibly, Eddy is set to a repeat cycle of terrorist or spy fashion, polish, spin,
and downpour reverie. Shattered sonnets done what he did and he shouldn't feel
so guilty, guilt is like a brilliant mind driven away from home, like confessing
to ancestral crime and Eddy doesn't want to be eclipsed by good-looking machines.
Eddy just does the crime, does what the noise wants. Through all of Eddy's
invisible stories, he lives slightly out of sunlight in a clearing in the woods.
But when there's slippage between guilt and time, and if you ever find it,
there's always room for more jumpcut abuse, lies and excuses, ways to work edits,
a volatile glitch which will become where and when and why. This is your death,
a remedy for sleep. Rather than an unwanted return to the ghost harbour,
mess around with Fuzzlebeth Crackleboy, or blag a time slot for The Guessing.
Liminal machines acknowledge you exist, so forget all about the Eddy Daemon
Hyperbolic Rollercoaster. There is no charge to ride, but you will be thrown
to excess on a nonsensical arc of emotion, then blown away in a strange corner.