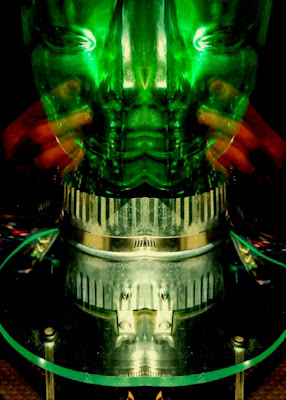 The collected shit of the previous week’s nights on his heels and laces receives a firehose blast while he waits, fading as urban as he can in his friend Marv’s office. He has Martell to hand usually, but on occasion he sips his mother’s Bombay, consensually somehow. They have a vent that doubles up as an industrial strength hand-dryer, however in his case it dries off his sopping Nikes. By this point he’s usually sweating because his mind has dipped into cruel, static waves; the bash of the hose paired with the hacking wind of the vent receives a delayed response from him. It’s around about when he’s reached the high street, drenched in nail bar signs and suits gone underground, that his eyes are spooned out and replaced with harsh bulbs, rendering his progress supposedly futile.

But he makes it.

His demeanour treks through the baited rabble, never hinting at an inner fleck of hurt or worry. His shirt rages like a loosely planned forest fire, causing any eye that darts indifferently at its tropical charm to tap out, bleeding in the ring; left with no other choice than to admire like a bitch at it. His flask sweats and so does he but all is ripe. He walks past Jenny. Her hand cups his shoulder. She knows she’s done wrong but hasn’t reached that conclusion from his reaction, for he merely nods in limbo. Jenny had forgotten it was one of his stride nights and only realized when her hand got wet. However jolting this realisation was to Jenny on the surface, the manner with which she tingled under wraps, unbeknownst to the DJs and her two sisters, merged seas and lights within her. Her solution was a trip, strip and come hither in the ladies’ restroom; she hadn’t brought a spare set of clothes. All she wished to give was something soft and motel-bound. No, she’d give it at the back of Buffett’s place. Either there or under a rusted bleacher in Lexington.

That specific because she reckoned, with confidence, that he’d acknowledge such an attention.

Martin Raoul DJ’d as ‘Rxmr’ to the crowd at The Fader that night (it was his peak, in the most sudden form of that word - $600 of equipment burnt with him watching, tied up and unavailable for any more Christmases with his girl Martha; they had oversized Suge Knight t-shirts on that night, Raoul had 3 teeth and not enough beat to keep him up). Ironically all said about his death was essentially rumour; to be frank his moniker’s meaning was too. He said that he fancied having a gimmick in his shows, like everyone flexing out an X with their palms, wavering slow as a weathervane in July (if that seems Southern to you, congrats; you found my intertextual tribute to the Houston in him). I miss him.

That tangent’s not completely necessary but I put dedications into my work instead of as a vague preface.

Marv’s friend has his legs lifted over his crown twice in a row. It’s not Suge’s Knights, it’s those who’ve chosen him as their muse for the night; surfing the violet-lit crowd. None of them notice he doesn’t speak more than three times throughout the night. Rxmr spins out his last with a slow Isaac Hayes. I’m snowed in, my will’s imported and not natural, rape in my lungs, heart stuffed in my gaps; you’re mistaken if you think it’s misplaced. He lands near me and his bulbs aren’t as nuclear. I cringe at myself for rushing into his face, but it drenched me, he tongued like dribbled in Tanqueray. Hayes changed to Tribe, small blood to rife, his poached egg eye split outward; there then, a beat life.

Rxmr addressed the scene as best he could, pointing out the cavalry with his headphone-stuffed hand, aiming to coax the crowd into ramming the gang onto the daisy-chain spittle floor. A lot of people came here the weekend after Coachella. The crowd flailed limbs vaguely in their direction. Most freaked at the man I kissed. Clean shaven brown now red velvet and slippy, he was dying and the Tribe song had finished. Rxmr fell back into the solid curtain, halfway there turning to Martin Raoul and then out for hours. I have Marv’s friend’s address and I’m thinking of going to visit his mother. I think she’s called Renée. I hope she’s coping and alive. It’s been ten years.