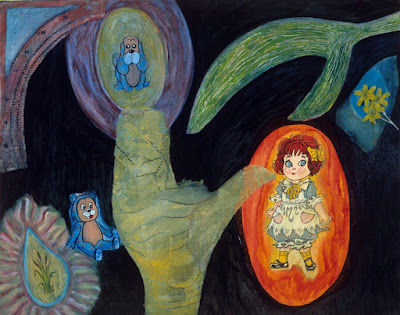 Lisa Cooley is pleased to announce Monster Mitt, a presentation of canvases by Susan Bee. For the past 40 years, Bee has worked as a fine artist as well as a book artist, writer, teacher, and editor. During the late 1970s Bee collaborated on the design and production of the influential L=A=N=G=U=A=G=E journal together with Charles Bernstein. As co-founder of M/E/A/N/I/N/G magazine, Bee’s prolific work as an editor situated and created a context rich with discourse around artists and themes unrepresented elsewhere. In her own practice as an artist she has produced prolifically, moving through photography, collage, and—most centrally since the early 1980s—painting.

The works from the early to mid-1990s exhibited in Monster Mitt represent an earlier phase in Bee’s investigation of painting, one in which the canvas is treated as an uneasy stage set for an array of collaged textures, motifs, and ready-made characters. Figures represented range from cartoon decals to Bee’s own children and are arranged amidst a variety of other (two- and three-dimensional) activities enacted on the surface of each canvas. Collaged elements bring together mass-produced vernacular with an expressive painterly landscape of gesture and mark-making.

One finds Bee’s characters relocated from their cheery origins to psychologically complex dramas, hovering in indeterminate, emphatically flattened surfaces. Combined with these figures are artifacts from Bee’s own personal life. Narrative fragments from her family appear, emphasizing a characteristic tension in the artist's work between personal archaeology and pop culture vernacular.

In the titular work, Monster Mitt (1990), a nightmarish abyss threatens to consume three cartoon figures whose languid expressions hover in a hazy, dark landscape. A hand-like form, emerging as if belonging to a bandaged burn victim—or presumably a monster clad in lace gloves—interrupts the foreground. The jarring but hypnotic effect created through these tableaux relates to Bee’s longstanding intellectual engagement with themes of psychoanalysis, motherhood, and the politics of painting.

Link to other paintings in the show:
http://www.lisa-cooley.com/exhibitions/susan-bee-monster-mitt

Alex Fleming: I’d like to start by talking about your relationship to painting…. How did you start and when? Can you give us a context of how you came to the paintings that are in the exhibit? About how long were you producing work in this idiom?

Susan Bee: I started painting as a child. My parents, Miriam and Sigmund Laufer, were artists and went to their openings and shows as a child. My mother had a solo show on 10th street in 1962 and continued to paint her whole life. She died in 1980. In elementary school, I went with her to her studio and painted in the corner with oil paints. My father was a printmaker and graphic designer and I would make etchings with him on weekends at Pratt. I also studied in a painting class for children at the Museum of Modern Art. I grew up in a bohemian atmosphere in Manhattan and in the summers in Provincetown. You could say that painting is in my blood. See this interview:

The works that are in the exhibit are mostly from 1990-1996. I went through a time of doing abstract paintings and photograms, during the period that I studied with minimalists and conceptual artists and theorists at Hunter MA from 1975-77. My most influential teachers there were Robert Morris and Rosalind Krauss. Some of that work  was recently exhibited at Mitchell Algus Gallery in Concept, Performance, Documentation, Language:

I returned to painting figurative works as I came into the orbit of the early feminist artists. After my mother died in 1980, I felt a need to paint again. I was working on L=A=N=G=U=A=G=E then and being influenced by the work of the poets that I knew. I started to add collage to the paintings in about 1989. My daughter, Emma, was born in 1985 and I started to be inspired by her childhood toys and her playfulness to return to a spirit of play in my work. The pop imagery that I used in the 1980s paintings that were derived from film stills morphed into this search for a decorative and humorous approach to painting. I wanted stuff from everyday life to come back into my work.

At the same time, my husband, Charles Bernstein and I moved to Buffalo for a year. This was a place full of wonderful kitsch and crafts stores with trinkets and decals and to amuse myself, I went to thrift stores and shopped for odd items to put into the painting. I was hoping to disrupt the purity of the surfaces and to create an uncanny space, which could accommodate little bears and Raggedy Ann and Andy and postcards and paper dolls within a painted surface. During that year, I got pregnant and had a miscarriage and this work turned darker. However, the work in the show, Twinkle Little Star, from 1996, has a self-portrait by Felix (age 4) and a photo of both of my children together. It also has pom poms and pages torn out from my children’s nursery rhyme books that they liked to scrawl on. I was also experimenting with different textures and surfaces including dripping in enamel in a Pollack-like manner.

AF: What kinds of concerns did you have in the early 1990s as an artist and person? What were you reading or thinking about at the time and how did this inform the evolution of this body of work?

SB: I was very involved with feminist theory and discourse. I had started my magazine M/E/A/N/I/N/G with Mira Schor in 1986. We were looking to get away from the orthodoxies of the art world of that time. See the introduction to our 25th anniversary issue:

We reproduce the flyer for our first issue. We wanted to emphasize social issues, but also reintroduce the concept of pleasure to painting. In 1992, we published a groundbreaking issue on motherhood and art making at the time that my son Felix Bernstein was born and was still an infant. That same year, I had my first solo show of these collaged paintings at the Virginia Lust Gallery in Soho. The motherhood issue had contributions from many women artists about the problems and joys of motherhood and art making. In other issues, we also examined racial issues, problem of longevity and meaning in artmaking, as well as gender issues. We wanted to address art theory in terms of poetic and personal discourse and move away from the accepted formulations of that time. We emphasized the importance of publishing artist’s writings and writings by poets and others about art in a nonstandard format.

AF: You are also known for your work in other fields, though you are not a poet you are well known to many through your connection to poetry, as well as your photography, collage, graphic design and book arts, how or did your other activities come to bear on this particular body of work?

SB: I was working as a designer and editor for commercial publications as well as poetry books during this period. I was the designer for Roof Books, a small press poetry book publisher, during that time. I designed L=A=N=G=U=A=G=E and M/E/A/N/I/N/G. I was also started doing a lot of book covers. My first artist’s book, Photogram, came out in 1979, and then I started to work with poets on various book projects. I often used collage in the books, for instance, in The Nude Formalism with poems by Charles from 1989, I collaged various pictures and used a variety of typefaces to make up the imagery. I liked the poets’ use of collage in their work. They would take a line from a text or recast a text like Kathy Acker and Hannah Weiner and I found their approach very inspiring. They had whimsy and freedom in their work and the idea of the cut-up still seemed vital to me in that period. In 1995, I did my first book, Talespin, for Steve Clay of Granary Books, which was all made up of collaged pictures from 19th-century magazines and antique children’s books and drawing manuals I had collected.

AF: What would you say was your intellectual and artistic context, you had a relationship with the infamous A.I.R. gallery, we’ve discussed briefly, but can you give a context of who your peers were and who you were thinking about or engaging with in terms of other people’s work?

SB: Well, I went to A.I.R. Monday events in the 70s and 80s and was friends with Nancy Spero, Carolee Schneemann, and other women artists. I was involved with poets, painters, and the people around the magazines I edited. Arakawa and Madeline Gins, Johanna Drucker, Mira Schor, David Reed, Susan Howe, Richard Foreman, Jackson Mac Low, and Mimi Gross were some of the people, who I knew and whose work I was seeing then. If you look through the names of authors in those publications, I knew practically everyone associated with those various groups. Poets and other artists were the ones who supported my work during that period. They bought the early paintings and gave the paintings titles as well.

I was not supported at all by the commercial art world and could not get the work shown during this time until Virginia Lust showed it. In Buffalo, I was told by dealers and curators that my work was too original to be shown there. It didn’t look like anyone else’s work, so it couldn’t be absorbed into the discourse. I was very frustrated that these works were not exhibited then. I remember that people were puzzled by these works, even when I finally showed them at Virginia’s, although I got enthusiastic notes from Barbara Guest and Miriam Schapiro. My collectors and supporters of this work at the time were Ann Lauterbach, Mei-mei Berssenbrugge and Richard Tuttle, Johanna Drucker, Erica Hunt, and other poets and artists. I was also looking at the work of Joe Brainard and Jess, who I knew and who worked with collage in wonderful ways. In addition, I loved Mexican art, folk art, and the work of outsider artists. Other influences were Florine Stettheimer and Marsden Hartley and the work of the Abstract Expressionists, Surrealists, and the Fluxus group, especially Alison Knowles.

The first issue of M/E/A/N/I/N/G contains a piece by me: “Running on Empty: An Artist’s Life in New York” with all the rather cutting verbatim remarks made to me at studio visits up till that time:

I also lost shows in alternative spaces when I became pregnant with Emma in 1985. Remember that my friends the Guerrilla Girls started their mission in 1985. I am listed by name on one of their posters from 1990 as a member along with many other women artists in my community:

M/E/A/N/I/N/G also grew out of an artists and critics group that met in the 1980s before the AIDs crisis and our first issue featured a tribute to a member of the group, Rene Santos, a wonderful young painter, who died in 1985 at the beginning of the crisis. This was a terrible time, and many of our friends passed away then.

For a fuller list of my friends from that period and background see my piece for the Feminist forum: