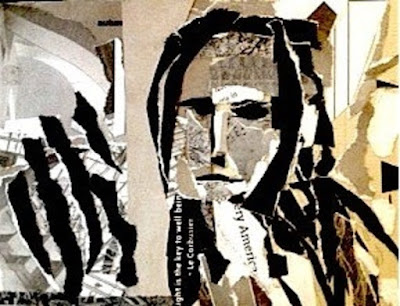 excerpt from Suicide by Language
a flash-fiction novel by Gregory Vincent St. Thomasino

The thing about the Mermaid Parade is everybody looks so bad and yet if you ask them they’ll tell you they feel fabulous.

In 1987 she wrote, all the pilots drive Lincolns and have pink skin.  The stewardesses fuck like bunnies.  After Cixous, the envelope is sealed with a kiss, is this poetic justice?  Write for rules and detailed information.

She wrote, Last night we made love like two retards.  And then the doodle of the Wonder Wheel.

The monster rises from the pit.  The lovers turn.  She screams.  He fires.  Roll credits.

We practiced pulling up and jumping out and hurrying into the buildings.

This episode: “Sex and the Collage Poem.”

Or you could say poetry is like sex, in which case you want to ask yourself: If this poem is sex, do I want to have sex with it?  Well, if it’s a collage poem you don’t know where that poetry’s been, and the poet who wrote it really doesn’t want you to know; or maybe that poet will tell you, but then that’s like that poem saying, Yes, I want you to have sex with me, but just not with me exactly, I mean with these other poems.

An anthology of poetry by women who have had episiotomies.

There’s a whole belt of avant-gardist territory where to criticize them is like telling the Fat Lady at the freak show to lose weight.

This movie was shot on cell-phone video.  It’s the footage of the head of Jacques Derrida on the body of the Bigfoot.

The poet’s mechanicity.  The poet as ironist.  Where he fails is in that his irony fails to rise above the rank of sarcasm.

In a previous life I was a chorus girl and I died very young and with a broken heart.

This is the part of the asylum where they let you go ’round naked.  Robert Lowell is here.  And so is Anne Sexton.

Manners.  Recoverable at will.

Gregory Vincent St. Thomasino’s most recent volume of poetry is The Valise (Dead Academics Press, 2012).  He is founding editor of the online poetry journal, Eratio.  For more from the novel, Suicide by Language, visit suicidebylanguage.blogspot.com.