Anne Tardos, The Rothenberg Variations, 2011 Nine NINEs for Jerry, on his 80th 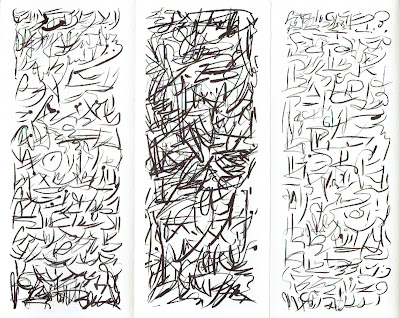 The Rothenberg Variations, 2011
Nine NINEs for Jerry, on his 80th

While going through a dozen of Jerry’s books, I copied out any line that came to nine words. A selection of these formed the nine 9-line stanzas. Jerry’s words remain unchanged. The order in which they appear is my own. The resulting poems give a sense of his voice, and mine.

We—like all poets—have a taste for stones.
A rabbit sneezes with the desperation of a man.
On Friday, I waited for the revelation of Saturday.
The fur of dada stretched out in the sun.
The flowers here are so sad, I could cry.
A woman with a crown brings blood in buckets.
The conductors who watered our plants dropped by.
The conductors who walked with their coffins were there.
Do you see the pederasts in that yellow wetness.

The breasts of the housewives are heavy with salt.
It doesn’t matter how fast the reel keeps spinning.
When it was over blue milk bathed the beaches.
I can only remember the ache in your fingers.
The corner of your eye that sleeps inside me.
How many sounds, is what I want to know.
For what can a man see in the morning.
I could not plot the difference; time, I mean.
I had the same chances as any other slave.

I wanted a throne of husbands in my name.
She has their desire to be always in love.
There was nothing to talk about so he listened.
I go with the dead I don’t escort myself.
I can begin to live like a human being!
Soon I would watch the world with many eyes.
The inner breath is the horse of the bodhisattvas.
Is this the sound, then, that the breath makes?
There will be no sun from this day forward.

It is the only word that the poem allows.
I was like a mushroom that appears and rots.
One morning he saw a rooster in the elevator.
Who is fooled here    by the dead    the Jews.
Passing Chelmno on the main road driving past it.
Because it was his scream and wasn’t my own.
The poem is ugly and they make it uglier.
When listening that evening to the other poet read.
Those who are beautiful and those who are not.

A word written by accident remains the final word.
The way an eyelid covers all an eyeball sees.
As bright as mirrors in which our eyes play.
A yellow sky from which a bird pulls numbers.
When an umbilicus dangles from a body in Chicago.
A knife drops inward with the sound of water.
“That death could fall from heaven on so many.”
Little by little they would will themselves to die.
From the heart of darkness comes a finer light.

A child born with a perfect sense of time.
Where the bathers in their terror move like fish.
The cruel majority weep for their unborn children.
If the cruel majority would only cup their ears.
Then the cruel majority line up to be buried.
Hail to their faces as they float around him.
Numbers so vast the mind will never grasp them.
Numbers we write down clank like drills or chains.
This is why the father spent the night in hiding.

There is fantasy no longer but everything true.
From up above, infinity seeps through the Milky Way.
A residue of cheese left on the milky paper.
It is their laughter dying out that frightens me.
Her fingers on the keys brought forth a song.
And next we come to things that really matter.
A number on the tape I still can’t read.
Accept our death played out where we find ourselves.
Too many poems about the dead she tells me.

The last surprise is to be left without surprises.
The poem of Picasso’s hundred rattles in my head.
A paint jar overturns the blanket soaked in red.
Only a weeping man can comfort a weeping woman.
Like that furry animal who pisses in your soup.
The supervisors seated in their chairs smell something rotting.
The fish meanwhile had slipped out from the net.
A man is breathing up the scent of soap.
Vowels and consonants cry out in every language: Help!