Daniel Y. Harris & John Amen, excerpt from the manuscript, THE GOLDEN VOID, "The Bride Stripped Bare by Her Bachelors, Even" 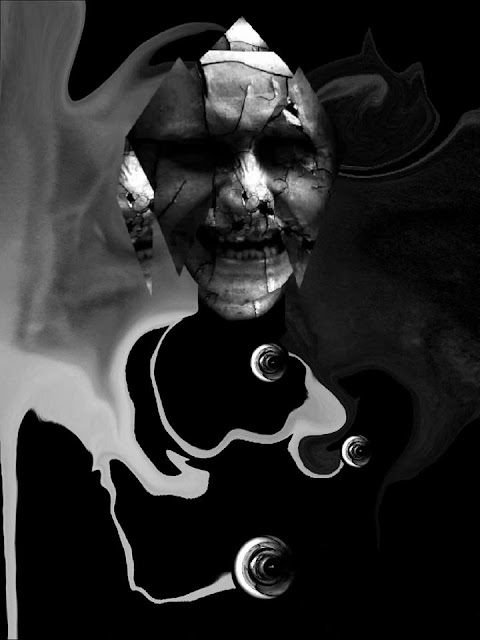 The Bride Stripped Bare by Her Bachelors, Even

A squatter named Marcel speaks while being lowered by gurney from an abandoned apartment complex. He had been stirring flammable liquids in beakers with a broken glow stick before the ensuing explosion and fire.

The Bride’s domain is jaundiced, oily declension
of lead foil and subjunctive dust, Vatican and Sistine,
virgin dust of Papal Bulls, chastity belts as a gown
of cracked glass. I should have killed Picabia in Jura,
buried his body in layers of bioclasts and oolitics—nothing
governs slippage.

The flammable liquids, it turns out, were comprised of a composite of glycerin and potassium permanganate. Marcel had swallowed halon or HFC-227 to interfere with the usual chemical reaction, which, to his mortification, didn’t work.

The insectile, monochromatic triptych with hint of a breast
stirs tentacle projections of a sexy misplaced ear, arches
the simian she becomes on a night of skin over wire.
“I am a sodomized
queen, raped by a rook between slits of broken
pane—my v-shaped proboscis, mechanical hip, and thrusters,
slender in silk, recede up a shapely thigh—sheer,
hydraulic.”

“Just drop me, you fetishists,” Marcel yelled to the paramedics, before continuing to break into metonymies of a drone-poesis with savage heaves.

The paramedics notice that Marcel’s head is a circle; not circular, per se, nor circle-shaped, as if one meant a tad more circular than a normatively shaped round head, but rather a circle. A perfect circle.

Capped with a sphere to coat the shards (dried blood with discolored
cracks from years of transport), the Bachelors’ domain becomes an
amphitheater of feet churning, the hegemon stuck in a feedback loop
without the possibility of climax.

A narrator, garbed in black cloak and boots, face darkened by shadow; actors motionless on the stage, ready to come to life, as it were, enact his well-elocuted words:

The empress-vampire, flanked by sycophantic drones,
paces a labyrinth beneath the City of Eden. She has grown
to appreciate, nay relish, mold and reptilian remains,
the way the earth moans like a didgeridoo. Her powers
now bore her—astral travel, psychic preemption, trans-
defiance of phenomenal law. Blah!
At night, though, she and her
hematophic flock emerge like starving chiropteras, rising
from manholes and foul sewage tracts. They stalk the alleys
and theater districts, combing Banker’s Boulevard in hopes
of quarrying some drunken broker high on the dragon.
Ah, the city in darkness.
Red nimbus throbbing in the cottony gray. Electric music
wafting from bars. The young men with their ripe dreams
and randy flesh, their desire like breath in a breathless grave.

No, no, no, screams the director as the leather-clad vixen enters the stage. You have no sense of timing, he bellows. Skip it, skip it, the director continues, just move to the next fucking scene. Jesus, people, this isn’t Shakespeare.

The narrator clears his throat, resumes at the director’s prompting:

In the hotel off Eldritch River, where bohemians convene
to drink and dissolve, and paramours ensnare their patrons,
The Chosen One (he does not yet know of his epic destiny)
sucks an opium pipe, recalls with nostalgia his provincial home.
On the muddy banks, the opalescent empress spurs her legions;
bathed in waves of moonlight, they advance, scaling the hotel,
hundreds of deranged bugs scuttling towards an open window.

Not sure about this, mumbles the writer. He has been waiting for his Moo Goo Gai Pan for two hours now. The only saving grace is the vixen winking at him from across the aisle. Two days prior she had said, so, you’re the God of this, huh. They had gone out for drinks, though she spent the entire (fucking) time on her cell phone, bantering with some vociferous and high-pitched call-girl named Jennie (he had wondered if they were lovers).

The empress, now redeemed by her love for The Chosen One,
reclines in the velvet coffin where for centuries she has slept.
You must drive the stake through my heart, she moans, but first:
tease me with that mortal tongue in this place that for years waned boreal,
but now waxes tropical from your throbbing promise. Together they draw,
the empress’s face, for so long pallid, now flushed with yearning.
Yes, God, she moans as The Chosen One lowers his face to her
dewy clume.

And then he penetrates her sacred cavern, quick and dead
in perfect syncopation. The stake now upon her heaving breast, she
hollers like a barmaid: Soon, soon I shall be released, but not,
my love, prematurely! He feels within his phallus the expanding heat,
grabs the hammer as woefully vowed; and, as he erupts into her
smoldering loins, drives the stake into her now forgiven and again
mortal heart. I die, yes, alas, she groans, I die! The vampire-empress,
gloriously spent, turns to ash in the hoary arms of The Chosen One.

Final scene: As The Chosen One stares at the now ashen form of his love, a breeze blows through the open window, dispersing the remains of the empress throughout the room. The Chosen One rolls onto his back, shaking his fist at the indifferent sky.

Applause. Cheers. That’s it for tonight, says the director. Not too bad for a first run-through. Be back tomorrow. 7PM, goddamn it. Now, anybody up for Indian?

Even—Marcel2 i = The Chosen e i·ln(2) = cos: The Bride
(ln(2))+i·sin(ln(2)) = Stripped Bare (e 2·π) i = 535.49 i = 1
0.7692+i·0.63896 = the Bachelor Machine as matrix of eros—prefer French
to Indian. Prefer the anachronism of 1912: the malic molds
point to eight liveries and uniforms (policeman, calvaryman, flunky,
funeral director, constable, priest, deliveryman, footman): Marcel’s
ashen form of love, the illuminating gas. Viscosity,
which I doubt or the large
glass with its shaft of freed metal, this champ le du I bequeath to you,
sex cylinders, readymades, et al. I have lost singularity—H. Mutt’s
urinal has erased my name from retina to brain. I am the occultic witness
who owes nothing to shibboleths. I liquefy in the fractured m-dash,
blending into yellow perfumes, then reverting back to pistons moved by air
currents. The dénouement of slippage with necktie and bayonet: severed
between acts and misdirected to the final scene.
Even—Marcel: bicyclewheelPharmacy
BottleDryerInadvanceofthebrokenarmPulledat4pinsCombTraveller’sFold
ingItemWithHiddenNoiseApolinéreEnamelledTrss
Unhappyreadymade50ccofParisAirL.H.O.O.Q.50
ccofParisAirBelleHaleineEaudeVioletteWanted$2000Reward
FreshWidowTheBrawlatAusterlitzWhynotSneezeRroseSélavyReady
madesunalteredobjectsAssistedreadymadesRectifiedreadymades
CorrectedreadymadesReciprocalreadymadesusingRembrandt
asanironingboard.

Applause. Cackles. You thought it was over for tonight, says the director. Not too bad for a deja run-back through it from a swerving unfocused angle. Be back the day before last Tuesday’s postponement. 8PM, for the love of goddamn it. Now, anybody up for seeing if the body made a crack in the sidewalk?

Even—Marcel
Stephane is dead. The chalky crime scene. Paramedics check his tattered pockets and retrieve a marble, a centime, a thimble, a Mona Lisa cutout, and a crumpled page torn from a theosophical encyclopedia, chapter MCMXII.
Marcel with a Centime

The thermodynamic orchestra is enclosed in a mobile
cage, its conductor sporting a metallic lung—the earthworm
plays a zither from core mechanomorphic to digitomorphic:
burrows,
cranks—the penal pistons—gears of a motherboard
at night in the rain with a wireless mouse.
I have returned. Not
what you think. Chassis with legs, ideogrammatic tubes, the magento
of base (cf. the welter of base)— to assume my post
as Chief Elder of the Istic Society. Please bear with my lustful
masonry as I reveal my inmost self.
The bivector spin
and the electroweak augment complex phases
of the 24-root vector gauge, the wheel’s eight paddles dark and clear:
luminous bardo from Gehinnom
to Gan Eden to the sunspot half-period of twelve years.
Within a few seconds, a later heaven, one eye—
for almost an hour the occultist changing his mind.

(Turns out, to expand the memoir, that the crumpled page torn from a theosophical encyclopedia is a section of a far more ominous codex, stuffed in Marcel’s coat in desperation. It’s discovered postmortem in the small apartment at 23 rue Saint-Hippolyte.)