Rupert M. Loydell, SCHRÖDINGER’S CAT IS NOT YOUR FRIEND 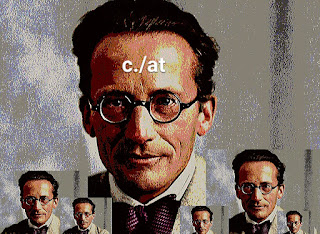 
SCHRÖDINGER’S CAT IS NOT YOUR FRIEND

What was Schrödinger thinking? The cat
is actually either dead or alive,
whether or not it has been observed.
What does this famous thought experiment
really mean? Does anybody care?

Schrödinger’s cat is not your friend. If he was
he also wouldn’t be, would purr and hiss
at the same time, would eat and not eat,
sit in a box and out. He’s a flawed
interpretation of quantum superposition.

What was Schrödinger thinking? He was
thinking too much it seems. If only
he’d had a cat it would have calmed him,
distracted him from working, saved him
from answering hypothetical questions.

Schrödinger’s cat is not your friend. He wants
to sleep, without poison or geiger counter,
without any theoretical considerations to
consider, no flirtation with the impossible.
Doesn’t care or know if he’s alive or dead.

“Everything here changes and nothing appears to.”