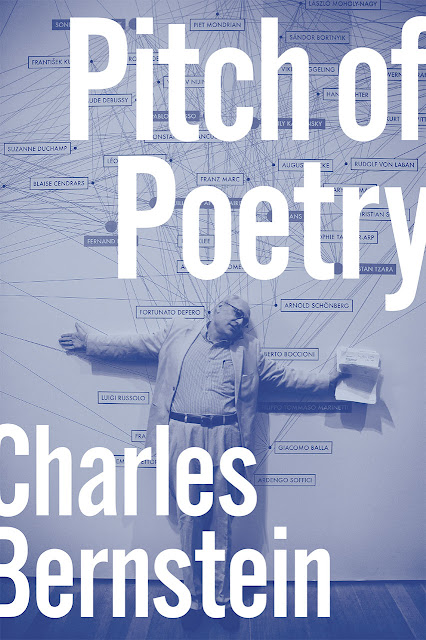 Charles Bernstein’s Pitch of Poetry:
Iterations of the Avant Garde
by John Amen

I first encountered Charles Bernstein’s work when I was in my twenties and came across his 1994 collection Dark City. The opening lines of the title poem read as follows:

A transom stands bound to a flagpole. Hard
by we go hardly which way is which
lingering somewhere unsettled where evidence
comes harder by sockets, stems
etched in flexed omission like osmotic
molarities flickering edge and orange at flow
rates unrepresentative of ticking or torpor….

Bernstein’s poetry, indeed his method, seemed to emerge from or at least have connections to a continuum of work with which I was, at the time, quite taken: the European Dadaists and Surrealists, Gertrude Stein, the so-called objectivist poets, and John Ashbery, among others. Bernstein was clearly part of what I’d paradoxically tag a tradition of subversion, confronting a longstanding and homogenizing aesthetic that pervaded (and perhaps still pervades) the landscape of American poetry; more specifically, an Orwellian academizing of “founding fathers” Thoreau, Emerson, and Whitman—and “token mother” Emily Dickinson. To reconfigure a metaphor employed by Bernstein in his recent release, Pitch of Poetry, his work struck me as a continuation of an important literary and cultural “conversation” (225). The opening line of “Dark City”—“A transom stands bound to a flagpole”—seemed obliquely impenetrable, drily nonsensical, and yet, irresistibly compelling. The rhythms and tautologies of the second line constituted a chthonic albeit quasi-mechanical music, even if meaning, in the utilitarian sense, was elusive or unavailable. I was fascinated by the abstractions (a definite revolt against Eliot’s “objective correlative”), unmalleability, and scientific (sci-fi?) tone inherent to the subsequent phrases and lines. I accepted Bernstein’s implicit invitation and plunged into his oeuvre.

One of the more rewarding experiences associated with reading Bernstein’s Pitch of Poetry is that the included essays, interviews, and (transcribed) talks directed me back to his verse. That said, my assignment is to review Pitch, not All the Whiskey in Heaven, which has remained open to various poems for the last two weeks and remains open beside me now (to 1975’s “Asylum”). Much of what Bernstein implicitly expresses in his poetry is fleshed out in his scholarship; much of what is elucidated in his scholarship complements a rereading of the poems. Speaking about his own writing vis-à-vis his involvement with L=A=N=G=U=A=G=E, the now famous literary magazine founded and edited by Bernstein and Bruce Andrews, he stresses repeatedly that “Language poetry doesn’t exist” (240, 284, among other instances, sometimes expressed with, sometimes without, an accompanying exclamation point), clarifying: “We didn’t capture an already-existing, fully formed aesthetic as much as participate in its creation” (60).

And:
…this poetic constellation was a resistance to (or phobia of) naming, characterization, and standardized modes of representation. So the description is part of the “problematic,” and it remains an open question whether this constellation of activity was a movement or school, aesthetic tendency, or convenient label, and whether the names for the phenomena were insulting labels or a standard for group solidarity. (61)

The editors of L=A=N=G=U=A=G=E weren’t seeking devotees who might dutifully spin their poetic wheels in stylistic ruts or apply the principles of some cultish manifesto. Process and exploration, at least ostensibly, were paramount. Unfortunately process is customarily trumped by teleology critically constructed in hindsight, according to any number of paradigmatic dictates. Hence, the notion of “Language Poetry” as a definable subgenre or “movement” displaying x, y, and z characteristics. History inevitably simplifies and singularizes what was (and still is) the multifaceted and paradoxical present.

Bernstein, however, remains a stand for what he was advocating in 1978: “But one thing I stood against then, as now, was any set of ‘basic tenets’ defining a poetry or poetics” (224). And: “I am interested in poetry as a medium for exploring the possibilities, and resistances, to expression, not as a vehicle to express a message I have already formulated” (242). Indeed, the second section of Pitch, in which Bernstein comments eloquently and in depth on various seminal poets, is contextualized by his appreciation for modernism’s salient legacy: process-orientation. Of Gertrude Stein he writes:

…Stein found an alternative to the teleological thinking that underwrites much aesthetics as well as ethics: the idea that meaning lies outside or beyond what is at hand. She found meaning inside the words of which a poem is composed, a discovery and exploration of the wordness of words that has parallels in Einstein’s discovery of relativity, Freud’s uncovering of the conscious, and Wittgenstein’s encounter with ordinary language. (84-5)

He rejected the major keys for minor chords, universals for particulars, the grandiose for discreetness…Zukofsky’s poetry is both emotional and accessible, but it demands much of its readers because of its refusal to separate intellect from feeling, or complexity from clarity. (100)

His deflationary diction provides a powerful counterforce—a negative dialectic—to fighting fire with fire, anger with anger, outrage with outrage…Moreover, Ashbery’s poetry is a (literally) breathtaking swerve away from the bombastic rhetorics of the years of his coming of age, during the Second War, of the apocalyptic thinking associated with the Extermination Process, of the H-bomb, and of the strident anti- and pro-communism/capitalism of the Cold War. (150)

As Bernstein’s commentary on his involvements and motivations prompted me to revisit his poetry, so his tributes to other poets catalyzed a rereading of the primary texts, again furthering or amplifying important “conversations.” When asked by Allison Cummings about the role of the critic, Bernstein replies:

Critics, like poets or other writers, often are most interesting when they pursue their own intuitions, when they articulate what most strikes them about the work they are discussing—whether or not it conforms to what the artist or other critics might say is the right approach. (189)

All the Whiskey in Heaven was published in 2010 by Farrar, Straus and Giroux; Pitch of Poetry was released in April by University of Chicago. Prominent presses. In addition, Bernstein’s filling rooms on his current book tour. That’s encouraging news, and there’s no need to fallaciously equate popularity with dilution. After all, it’s often the case that an artist’s radicalism speaks to a subsequent generation, or a generation twice or three times removed, more keenly than it does to one’s own. Certainly Bernstein’s brand of rebelliousness is timely, though authentic provocation is somehow always timely, archetypal, and transpersonal; then again, so is conformity. What’s the centripetal without the centrifugal? And isn’t Satan, speaking in Blakean terms, eternally on the verge of triumph, even if by his very nature he never actually triumphs? (If Bernie Sanders is elected president (which he lamentably won’t be), Bernstein should be the “inaugural poet.” Who will it be if Hillary Clinton is elected? Would there be an appointed poet at a Donald Trump inauguration?)

Art need serve no agenda—aesthetic, political, or otherwise—though clearly the role and/or proper purlieu of art is more often than not aesthetically, politically, or otherwise defined in such a way as to advance or further entrench any number of agendas. Bernstein’s observations regarding the manner in which “official verse culture” imposes agendas “by denying (or naturalizing) its positions” (334) leads him to proclaim, in the final section of the book, “The Pataquerical Imagination”:

The legacy of romanticism haunts the contemporary imagination of poetry. Romantic ideology…underwrites the hegemonic ideology of postwar US poetics—that poetry, through its commitment to lyric sincerity (high lyric) and refined craft (high-bred) can be a universal expression of human sentiment. (296)

I dwell on these publications and critics [see 293-337] because I think that they…do matter…but mostly in the negative sense: they make poetry seem culturally dull, more concerned with civic uplift or memoir than aesthetic invention, even when this betrays the aesthetics of the poets being championed. (336)

And finally: “The lunatics have imprisoned us and say that we are deviants, monkeys, insects, anonymous schizophrenics! (337).”

The various pieces in Pitch cover substantial ground, addressing a plethora of concerns and illustrating Bernstein’s lifelong commitment to vital expression—his own and that of others—how Bernstein has, for forty or so years, consistently confronted institutionalized criteria that invisibly and systemically perpetuate exclusivism. As I opened this review (has it actually turned out to be a review?) with a reference to Bernstein’s poetry, I’m inclined to close the piece in a similar way. Consider these lines from “The Lives of the Toll Takers” (also from Dark City):

There is no plain sense of the word,

description is a lie behind a lie:

but truths can still be told.

If postmodernist history, theory, and literature have underscored anything, it’s that language is an instrument of both intimacy and distraction, both interconnectivity and isolation, both the ecumenical and hegemonic. It is, ultimately, a vehicle by which we vacillate between madness and enlightenment, for the most part remaining in neither for long. Perhaps in this protracted and mostly Sisyphean journey, there are indeed moments during which “truths can still be told.”