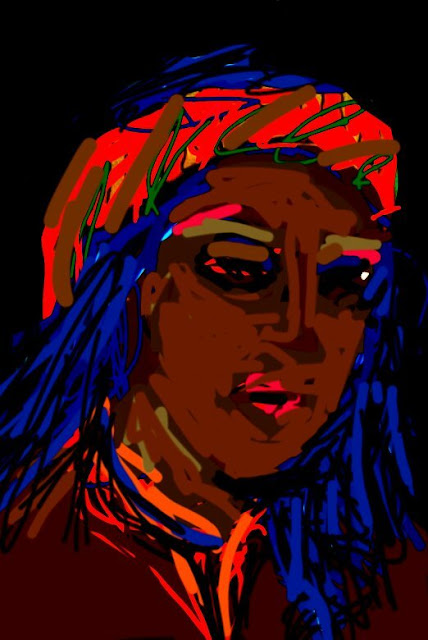 Gabriela Sings Fado Into the 21st Century
—for Gabriela Silang

I yearned for amnesia—Desiring amnesia from seeing
dragonflies off-kilter, shoving through air like husbands
with bruised eyes—Black dimes interrupted the sun’s glare,

an experience familiar to travelers visiting “Namibia in
search of pure light”—Uncertainty defined by farewells’
thermodynamics, exhaustion yielding the scent of armpits

until sight clung to a riding crop, suddenly admired for
its stiff leather spine—Centuries of woodcarvers immortal
-izing stigmata on the limbs of virgins and saints, eyes wide

and white in exaltation—Sometimes, days of unremitting
brightness from ignoring all ancestors to stare directly at
the sun, only to discover myself clasped by the cool dimness

how their thin limbs refused to break from the weight of lush
petals and overly-fertile stamen! Mountains of bones shared
the pallor of thick, white candles burning in helplessly tin

candelabras—No metaphors exist for genocide—Should
one italicize the word God? Sudden longings for rose petals
yawning like little girls, like the daughters I never bore—

tuning forks longing for emphatic hits—That video I created with
lies: its choreography of phantoms rated “X” by bureaucrats
expert only in a “failure to articulate”—Empathy defined through

in the utter aliveness of dying—Painting a floor red with my hair,
backing myself into a corner: when you grasped  my throat,
your greedy footprints completed my painting—Whispering,

“Step heavy.  No such thing as a sonafabitch in turning art into
flesh”—Press me against a steel door radiated by generous
halogen—Hunger defined as losing battle with courtesy—she

was not a petite doll urging sirloin on others while she settled
for sauce on rice—Longing for an intermission. But love is also
a source of difficulty—Pyres of ashes rise with a verve matching

Babel’s ambition—Sag, therefore, into night as if night is a lover—
The teacher likened the moon to an arsehole—A lake capitulated
to ripples from a stone’s impassive penetration—Can art fulminate

in tattered gold as “Holy Bible”—Melancholy rice fields a rippling
mirror of a sunset inside you—Generous beds of unpicked mint:
radically fragrant but untapped potential—Coins tossed at brass

fountains wish for the opposite of diminution—Craving kindness—
Photographs overcome by sepia, certainty demolished by screams—
Demeter’s statue languishing over water where orange manna set

goldfish ablaze. I had no excuse, not even History—Compromise
defined as writing typhoid fever instead of ecstasy—Inhale the biting
scent of tar—Chanting calculations of false theorems, weeping

as if there are gods to court—Soldiers whispered by a paltry stream,
their eyes locked on the slimness of my ankles revealed through
ripped cotton—I owned a widowhood to avenge—All men were my

sons. I could not afford any man reminding me pearls never yellow
when worn against flushed skin—Hollow cheeks on mothers
cradling dead warriors—Charisma defined as letters forming words

like myrrh, honey, balsam, pepper wormwood—flavors used
by Romans in Beaucaire to camouflage fermenting raisins spoiled
in amphoras now lining the Mediterranean with thousands and

me—Nights lactating morphine, roses rebelling against the after
-math of blooming, and vampires about to sin—Marble floors
with cobalt veins chilling the barefooted sleepwalker—Diego

calloused fingers free to roam across a piano’s ebony keys—
Marisa peeling the skin from a blue-boned fish, Shakira rustling
up an old clothesline for tying hands together after mosquitos bit,

We played in a Kingdom waiting to happen, where palaces
contained empty thrones, where no one would have challenged
had we sat on rubicund damask cushions—Instructions ending

with the order: Do not cry—Envy for scout bees charged with
discovering new food supplies—how I coveted their eyes like
a series of mirrors able to split light: “the trigonometrical bee will