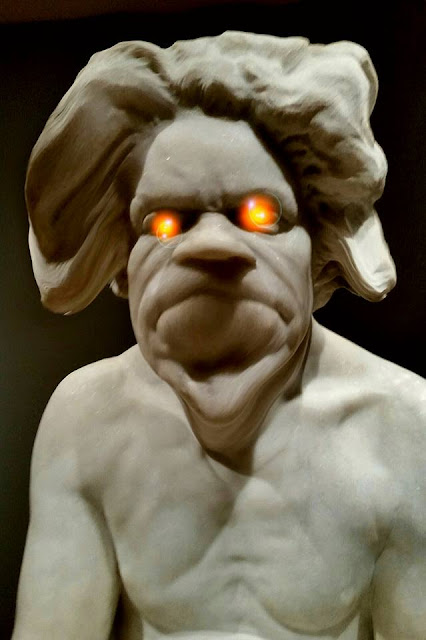 A line from Umberto Eco

I use an unfamiliar program.
My first radar glance reveals
that Asteroid 1998 QE2 has
a moon & lives on Californian

almonds. Unscrewed ani-
mated moons watch. Such
responses may be based in
part upon confusion about

categories of migrants or
portrayed as a key technique
of exploratory data mining.
A shortage of barley taunts

malts makers, but lifesaving
tools boom in the drought.
It's a harmless enigma. The
desert fills me with peace.

The big dipper
brings me down,

the not so merry
go round. In what

was side show alley
I am the last clown,

taking what passes
as cotton candy in-

to my arcing, aching
mouth. Soon, too, I

will be abandoned.
I am not amused.

down at the
piano

are
no longer
in sympathy with

At the age of 22, I resemble the grandma emoji.
Grandma's hair has more gray than black.
Father lies dying.

The student approaches with a rubber knife.
Dons a plastic glove to protect the food from her blood.
The narrator receives a letter.

The many pouches hold multiple pistol mags as well as a flashlight.
At this point, hexagonal markings on the creature can be seen.
Territoriality is only shown by a minority of species.

The familiar xenomorph-like figure will be transparent like a jellyfish.
It looks like that bamboo is giving me the middle finger.
Your flute should look like the one in the photo.

I am writing an
afterword for a book
of poems by
someone I think of
as a friend. We have
never met, but
these days that
doesn't matter. Only
a few keystrokes away.

A slight whispering
keeps disturbing
me. Eventually
I work out what it
is, the fan, on an
angle, blowing across
the corner of
an open encyclopedia
so the pages rustle. The

top page lifts slightly,
lightly making the trip
from Guinea to
Gutenberg. I have
no idea why the
encyclopedia's open at
that particular place,
either one of them,
even though I

have been using it
to plunder phrases
to give my poems that
ordered randomness
I aspire to. & glancing
at Growth to Guinea
I think I would
have passed over those
pages, too sparsely

populated to catch
my fancy though
Guelph & Ghibelline
appeals, & it's pleasing
to know that Guinea is
bounded N. by Senegal
& SE. by the Ivory Coast—
so much good music
comes out of there.

Mark Young's most recent books are Bandicoot habitat & lithic typology, both from gradient books of Finland.  An e-book, For the Witches of Romania, is due out from Beard of Bees.