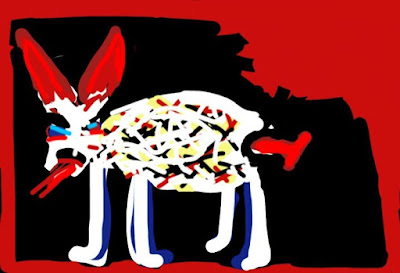 God is a Male Goat, image by Irene Koronas

I make love to God, unnatural for me as I am not
homosexual. I do this as pilgrimage though other
men’s erections repel me and God’s is especially
clammy, brutal, like wet lead bludgeon protruding
from barbs. I suck it like supplicant, he bloodies
my anus, relishing. I am made female debased by
King for initiation into cult. Henceforth I shall
plead in squeamish architecture oval-mouthed,
cradling hymnal, and bend over naked to his will.

…and this little god cried wee wee wee wee all the way home
which is unusual, for gods seldom scream home afraid
to mommy being immortal, omnipotent, impervious
to pain, imagine Zeus sucking thumb, clinging to mother’s
apron under bully-pursuit. Imagine Neptune in water
wings. But chill climbed little god at something unspeakably
evil escaped from pit, red skinless muscle and gut joined
by enzyme-shiny fangs. This little god full of cock girded
for fight but caved bloodless like any coward at implacable
dominance. This thing can strip you off bones like sleeve
of meat discarding pile of steaming guts, so wee wee wee, god’s
springy piggy tail corkscrewed up asshole as he flees. Mom,
cookie-warm, wields rolling pin like club, don’t fuck with
this, slapping cudgel in hand, nasty piss-ant, crack you
like tick. Piss-ant pops tollhouse, pops mommy’s head
between jaws, brains running out like burst egg, slashes
to neck her cunt, sticks head inside, gnashes guts, spits
out ribs. God unshelled nakedly stands—little chubby
package—and is gone in an instant but for chewed
gristle. The other four, like toes: the walls look like
tomato puree blender disaster…

God shields, exclaims soldier of salvation, flashing Him
like firewall before mortality. Mortality shrivels before God
like ancient penis. Death devours flesh, not soul. Flesh is empty
meal for stomach, deepening, not satiating hunger, like
Cheetos. One soul would bloat Death like fire hose gush
down throat. I own Wyatt Earp Sheriff badge, Elite
Black Visa Card, BJ’s Warehouse membership, valid car
inspection sticker but defenseless lies my soul—naked
infantryman. I am without armor against bullet. Faith,
he says, is your shield. God intercedes like Kevlar.
Open eyes, heart, be saved. I shut lids, epoxy heart,
cover self with spite, throw myself from prow into sea
of denunciation, plummet into watery abyss. Death
tears off my flesh. What shark leaves pipefish eat,
plankton devour fiber off bones. I am cloud of
underwater feast. Faith repulses beast from breast.
Have you been saved? “Yes, oh yes!” cry billions.

God says, pass, you lived admirably--
loved, forgave, prayed, sacrificed.
Then God says to another, you, back
off! You’re condemned. You cheated,
raged,  strutted, begrudged. You shall
blister. The consigned one pleads
on deaf cochlea. Trap door bangs.
He plummets to pit of wailing skulls,
boiling flesh, bubbling cauldron
within which sinners eternally
scream. Like fuel, new sinners slide
down shoot. Satan resembles  Mr.
Kurtz. Mad, utterly, heads on
pikes. Meanwhile he who passed
gorges divinity, virgins, beefcakes,
girls. Satan bathes in bone
liquefaction. Bartholomew washes
believers’ feet. I, Jew, decide to
marry Jesus in formal ritual:
Baptism. Transubstantiation.
Rapture. Reinvention. This I
saw in Ezekiel-like vision: angels
floating round Virgin Mary levitating
above floor of crawling adders.
God said come. I approached.
She bore two faces: one anterior
angelic, beatific, one posterior
grotesque, evil. God commanded
kiss her evil face, kiss Mary’s
monstrous ego, kiss her
festering oozing sore. Love her,
he demanded. Suddenly charioteer
lopped off my head, tossed it to
God who jamming digits into
jellies, gullet, with my ropy
member naked, flopping bowled
me over with my own globe into
whose mouth involuntarily I
shat again and again in liquid
terror. Upon awaking I married
God in formal ceremony and
ever after worshipped the
filthy, repulsive, and abominable.

I was faring swimmingly—woman hair-washed
feet, infirm glowed, deceased rose, food-fish
teemed in nets, throngs converted--without
you. You couldn’t leave it alone, stuffing me
with pudding, over-gloating, pumping with gift-
bearers. I was satisfied, functioning. I didn’t
need your head stuck in my details. Predictably
you snuffed my happiness, bribed friend to
rat me out, mortified flesh, nailed me shut
under mocking sign: “King of Jews.” (Why
through wrists and not, sadistically, balls
or tits; you always resented me.) Such splendid
revenge, subsuming me eternally under your
fluff, suffocating me. Granted my swollen
egotism, but needed you lance my lava
out? Couldn’t you allow actualization? I was
superb physician, I abated suffering. Selfless,
always selfless, liberator against autocracies.
And you, hateful to the last, stripped my
thunder to bloody bone, stuck me in crib
somewhere near Microscopium. Baby, even
now, into whom you ply universal infantilism.