Adeena Karasick, excerpts from The Book of Lumenations 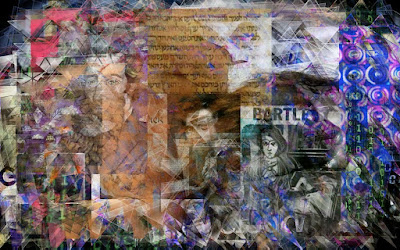 From Checking In II
Jim Andrews and Adeena Karasick

excerpts from The Book of Lumenations

And in the ache of asylum

where limning sutures, festooned in sunshift

Lie with me
in the illicit quiver
of knotted conscience

the providence of slipped

Lie with me
in our ash-starred silence

in the riveted drifts

And suck the sting of sun clung lettered-skin as I open my mouth
wide against you; ink gnashed

in the twinned ignition of scar-studded scripts

And behold, the stretched vestige of sprayed hunger
whose singing fingers devour
in the petulance of choked zones
slain in the scored synchrony of

of the rippled signs
of chorused dawn

Bled like a maiden of wrecked darkness, netted inlets
of ripped dyssemia, fleshy sequiturs, wisteria, the taste of broken bans –

Hail the billow of campy siege, the truance of giddy travaille

And make me dwell in the darkened wreckage of feverish dread

In the censored resonance of pliant heaves;

The plated shudder of my parade.

Burn me in the binding bias in torqued harrow.

For I am woke in the swindled aperture of fibrous light;

Naked with his yoke in my mouth

Let him sit sultry for he has laid upon me

Let him put his mouth into the dust

Let I offer his check to the smitten

Let him be filled with peaches

The load is my potion to those who wait;

Who has come
in the undulance of unassailable labor

Covet me with elastic assertions,

Make me come
in the refuse among the precipice

in the amnesty of opening
rapt in the shadowed torrent

In the tell of the luring

And say: lick dawn.
In the frame of hushed lobbies

Suck solace in the eros of my city
Haunted with borders

And fine me in the engine of our demise

And cast satin upon me

Water my flowing head  -- and cut me
in the dripping petulance

Hear my vestibule in the hiding of your signatum

Drawn near in the call of farce

You have seen the ringing dalliance the jagged closets

You have seen the nexus of varnished device

You have heard the silty ode of tainted sway

Formed in swelled speech hammered
in the ferocity of mourning; ground with fitful defiance

As you police me in the milk of daybreak

Grazed in the hunger of dusty flummox.

Riddled in thick drift
and drunk with iniquity

Whose balletic thirst
is clasped
in the synomymy

of their yaysay, purer than sinew, and wet with dusk
ruddier than choral, sapphire, milking crimson syrups
sifted riffs of spilt surfeits

crowned in syllabic aberrance
and punctuated with ferocity?

Who’s echoed in the disquiet of fiery salutes

whose contours of thirsty flourish
lather in the inhabitants of
herded words?

And who frames the humming grafts
of grinding ligatures

whose prophecy pressed
in the witness of

And through trysty cirques, censures
garmented in letters

who’s calling out in the fingered folly

in the stop-watched sap scored arias
of purring rigor?

Whose ruched ramparts
mount in the
cradled bouquet

whose drenched thresholds
of pursed favor
flutter in

And in the raging contagion of the yoked hurrah!

You say umlaut, I say amulet.

Is the emolument an emollient today?
ameliorated --

Is the error a mirror?

Here, her
in mired err
whose scar
is clear

shared prayer / where
care is rare

in
her
vey iz mir
tears shmear
where fear
is clear

as mirrored ire / error
where flared air
colored
in your care

in the ripped wrought
of sobbing lot

in the raging contagion

The light which reeks of
the light of the light that will not leave.
That I cannot write; that falls in its carrying
In the killing of its crushing, its clinging
and its excesses and its masks.

This is the light which lifts up and travels
from one word to another grimaces
in the torment of its hardening.
In its emptiness. In its own contamination.
Buried without madness. Drowning
in its own inexplicable cry.
And this is the light that does not write,
does not speak but in nightmares.
In the death of its enunciation

which rises, swells in indefatigable profusion;
in immediacy and madness. In hysterical
profusion. This light of doors, thresholds,
capacities, amplitudes, omissions and promises

de[p]ths and pleasures. That trembles
with tension. Stretched
in the torment of glyphs.
glas. gloss / glossary rasps lisps
in its missing. The light of the light
of the letter screaming
in the nostalgia of the present

Alfred Hitchcock is using Windows
The Smoker, the joker and the mid-night toker are wanting a vape
Old Man Beaver is wanting a 5 cent cigar
Loves Labor is Lost
Microsoft is getting hard
Form is wet with Content’s Dream
This content is not available
The Alte Kacker is with Kathy Acker
The Spy Who Loved Me is using Malware
The World Wide Web is at The W
The Cocteau Twins are at the Double Tree
The Giving Tree is dead
Hamlet’s Ghost is reading the Phenomenology of Spirit
Chick Corea is at the Tequileria
Deus ex machina is Raging Against itself
Florence and the Machine like this
E & G are saying F off
Happy Man is at Friendlies
Oh Fernando is at Nando’s
The Long, Long Sleeper is Woke

The sin-qu-a-non is overflowing
bp nichol is sinking in sin’s kin
Lynyrd Skynyrd is in the skin i live in
Roland Barthes is with his exes[s]
driving a polished lexis
Emily XYZ is reading ex why zee
Bold italics are refusing to move into an upright position
The Riddler is with the Fiddler
The Saudi is driving an Audi
Siouxsie is eating sashimi.
Sad Boy’s Sad Boy is playing with his enWii
Kant is looking for Duty Free

Wynken, Blynken and Nod are at Sleepy’s
Gertrude Stein is at an airbnb
John Ashberry is where black swansdown settles on the city
William Butler Yeats is where the Inn is free
Yes Man is in the Noosphere
Google is mapping the territory
Narcissus is using his selfie stick
The House of Pancakes is waffling
Aer Lingus is serving vaniglia
The Disillusioned Lover is enjoying some secondary Orality
Ludwig Beethoven and Ludwig Wittgenstein are now friends
Fed Ex is totally “shipping” this
525,600 minutes are at Midnight Moment
The Sixty Minute Man is reading The Hours
Minute Maid is taking minutes
Time is on your side
Copper and aluminum are exposing their inner mettle
The excluded middle likes this
Dirty Concretists are overwriting
Van Gogh is eating a mango
The pedagogue is in the synagogue
The luddite is going analog
and says binary code is such a USER
The system is closed.