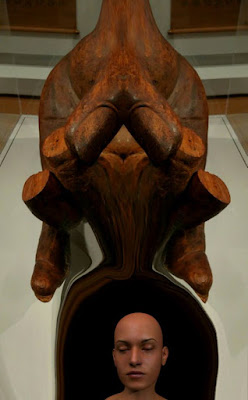 Metalepsis for the Ritusen Scale, image by Daniel Y. Harris

The ritusen scale is based on the principle that around the 3rd and 7th degrees everything starts to go a  bit  bertie  and so it’s best to
avoid  it  altogether.         You can
pick out your own way of doing    things    but    if    you
want to avoid
him seeing red there are certain
ways to go about it.     When most
potters in the West think of raku firing, it is what should technically be referred to as "American" or "Western" raku, in which work is removed from the kiln at bright red heat and subjected to post-firing reduction, blackening raw clay,
crazing the glaze surface.  I have
only been to Asia twice, and one of those was a quick trip over the
Çanakkale Boğazı
to meet a friend.  The Principle
of Sufficient Reason is a powerful and controversial philosophical principle stipulating that everything must have a reason
or a cause.  The ritusen scale
is based on the principle that it all starts to go a bit bertie around the third and seventh and so why not avoid all that palaver after all?

Nothing to see here

CW Legal Ltd. is an appearance to be reckoned
in the vertical & greying light which [shift]
as the clocks have recently feels newly [pause]
but classically still of interest.

CW Legatt is an heart which leapt itself
by the gust of its own umbrella on-
ly a moment though enough to [space]
the unexpected gap in the footbridge
which materialised [slash]
dematerialised itself as the crumbly
brick floor, only for CWL, in this 16-bit

environment.  Chas. Wm. Legall Ltd. Esquire etc.
is a birdlike is the sort of chap you can
[Esc] through the bars of a python pit
would be a feat
second only to an [undo]
of the pillars of Charles V,
(HRE) were it not for the fact

unboxing, teardown: once in a land a firebird

Once was a golden bird stood on a tree.
The lamp shafts took him down in your small ken
but didn't you ever see the glitter such
in a many an abstract club and synthpop cot?
Rotate,      if you will,       a glitter ball.
Say if you see the bottom now.  And now.
And now.  And now.  What about now?  Is it better
or worse?  Better or worse.  Or about the same.
And now?  And now?  And now examine me
this glitter bird.  Did you say bird yes bird.
This golden bird stood on a tree.
You will feel a short puff.

unboxing, teardown: this entirely new novelty of a bird

Do you remember the bird?
Yes I thought it was not that long ago.
It was a story of three tsareviches Vassily
Pyotr and Demyan.  Pyotr and Vassily, Demyan no
no Tsarevich Ivan.  They rode off,
One of them in more canny kind.  He met
a wolf.  Will you be pardoned 3 more times
no never 3.  So the wolf leapt over hedge
leapt ditch, leapt fosse.
He it was he retrieved the goldbridledgirl,
he it was he came back there, they and after ever
lived.  Do you remember wolf?

Evo Morales for all for all morning
stand up your rays in the days dark awning,
take off your traps and snap the leather back
to stretch your partner in the old salt flats flat.
Evo Morales for all in which way you go
how long do you know how long do you know?
Howl brightly at the fucked moon, far less brightly at the sun,
withhold your prior knowledge of the ways the days run,
stare up at your cabin and take in the rugged stars,
bathe your periastra in the rightness of remorse,
skim off the bathysphere-discovered doublethink,
jettison your moors and sink.