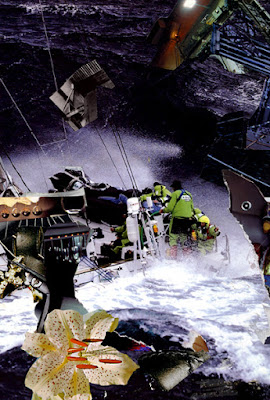 The Edge of Forever, image by AC Evans

As gold sunk in filth will not lose its beauty
So, in England, in August and early September,
You must render flesh to flesh and forbidden
Elements of which little is known.
At the Edge of Forever,
Circular currents, including Scylla and Charybdis,
Are dangerous for ships, even in calm weather,
Especially if you think depravity is the way of salvation,
A Whispering Gallery where cards are shuffled
With gestures both natural and effective.
The world may have to wait…

Meanwhile, we shall begin: salt layers are deposited,
Consciousness recovered, the forest submerged
In the southernmost and deepest channel we can find.
I was struck by the obvious pseudepigraphy of
All the Patristic texts, especially this one.
Here, we decided, is the origin of oblivion,
A steel-plated lawsuit lasting thirty thousand years,
Extended and rearranged through inner illumination.

Conclusions as to the nature of insularity have
Since been proved incorrect.
Depreciating the Cosmos and anything else,
They crossed the North Sea
And finally reached the coast of Russian Lapland
To discover the wrecked ships and
The dead bodies of the crews,
Together with the Commander’s journal
And a map of The Submerged Forest,
In the mouth of the River Dvina, in the White Sea.
This forest was very large and covered the
Surface of the entire known world,
Elaborated beyond the Edge of Forever,
Creating its own matter in the Void.

Spirit is transformed by knowledge, the ratio
Of rare phenomena observed in cloud chambers
Where particles originate.
Survivor of a battle at the ancient capital of Wessex,
At the confluence of Nadder and Wylye,
He later conducted experiments of this type
To save the illegible name
And the angels surrounding the Virgin,
The male-female prototype of turbulence and diffusion.

Cyclonic curvature is obtained by stealth,
By killing The Stranger in Eternity.
Momentum is destroyed by the metaphor of sleep.
Vertical velocity requires union with succubae,
Mainly as result of interrogation
and heretical ideas of salvation: notorious apostasy,
Relief from the pervading gloom, from
The alarming appearance of the iron wall of annihilation.