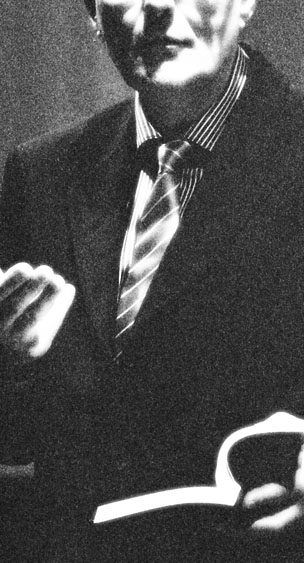 Everyone loved what they saw.
The rough displays, the mitre makers
The marigolds and the clothes
The persimmon velvet curtains
The garlic tea cloths
The passionate biscuits
The Slavonic chocolate
The wines from Cricklewood and Westphalia

The whole family are keenly interested
They arrive in droves.

The first year was like icing
The man with the red hat
The girls protected by gold wire
The music that never ceased.
Now they swear by tennis balls
the unknowable crispbreads, the meats in vacuum packs.

The family they just want to save money
They always do
They have this furious passion.

They buy onions
They buy the weirdly branded tins,
the fold-up beds, the spread-on chocolate,
the spanners.

Clearly the song will have to wait
amongst all this great saving
How brave they are
buying marigolds when they don’t need to.

In the queue there he is but no one recognises him
why would they, the joker,
self-portrait in his trolley,
his New York face peering out of that so realistic convex mirror.

You are down here in the ground of
Pere Lachaise beneath a stone
big enough to hold you down.  The space
around you is full, names you’d know,
Max Ernst, Paul Eluard, Modigliani, de Nerval,
Perec, Proust, Pissarro, Wilde, Alice B, Appolinaire.
This is no humble place, it’s a city.
To get around you need a map

Given what you did I expected uproar like Morrison gets.
Excited girls with tattoos, young men with that
look of beat nonchalance that belies the roaring
they have inside their heads.   But there’s nothing.
It’s as if you’d not changed the twentieth
challenged its serial monogamy made it
ripple with how the brain turns.  There’s no bramble
nor trees near you.   No ivy growing across
your name.  Just a rose someone has left,
shrivelled  now,  and a stone in the
shape of a heart dropped  above
where yours might be.  You had one once.

July  the twenty-seventh is simply not prepared for.