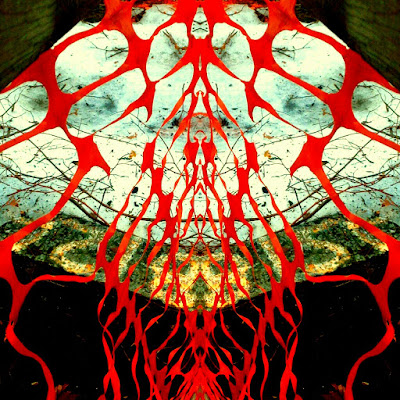 If you go to school the teachers berate you
for your dress. They have no sense of
our predicament. The world we live in
is a haunt of shadowed forms, somewhat
difficult to explain to creatures parachuted
in from a bright

and glamorous elsewhere.
We have been left to fend for ourselves.
The butcher who used to give us meat has
moved from the neighbourhood leaving no
forwarding address nor any culinary advice.
The fire smokes; we are trying to burn poems.

TO TEND THE TREES

They asked me to tend the trees
because I have “kind fingers”. So
I ventured into the forest even though I was
frightened of the shadows that persisted
all the day long. With me I took no tools
only a small canvas bag holding an eternal apple
and a bottle of everlasting water. My mother
always told me to value simplicity and frugality
and something else. Perhaps self-preservation.
When I reached
the babbling brook I knew
I had reached the heart of the forest. If you listen
in the correct way you can hear it beating.
I set about my work with gusto. Time moves
more quickly when one is occupied by a task
that requires total commitment. In no time at all
I was an old man with no stories to tell except
this one, which is no story at all.

The office manager took me to one side
and suggested I dress what he called
“more appropriately for a gentleman of my age.”
This particular day I was wearing my Madam
Butterfly outfit; it fortifies me in the face of
November gloom. This morning, as stars
clambered down from the sky, the cabbage girl
had come to me with tales of

another country
where all the jobs were made of crystal. Should I
compose my letter of resignation now,
and apply for a new passport, or find some way
for her “tale” to be confirmed? I asked the air
this rhetorical question, not expecting an answer
because none was needed. But the office manager,
standing on his pile of dust, answered it.

THINGS AS THEY ARE

My new shoes were giving me gyp
and the thought of walking home was
breaking my mind. I tried to find a cab
using the app on my phone but nobody
responded - I was, after all, in the backwoods
and not many people come out here.
I could see the lights from the TeeMall
in the distance, and in the opposite direction
smoke

curled up from cottage chimneys
built in the previous dynasty. Somewhat bored
I sat down, leaning against the trunk of a tree.
After all this time you still don't get it, do you?
Indolence symbolizes the captivation one feels
when sundry emotions coalesce and you sense
divine grace. And the lack of metaphor
signifies  an acceptance, albeit reluctant,
of things as they are, unadorned.

The voice came borne on the wind ugly
as a gravel-scarred crone. It was impossible
to make out what was being said and, as
we have thought so often in these years
of ostracism and drought, we little cared to
know. The voice was little more than an
annoying distraction or intrusion. A file was
being delivered, and so there was a lot of
waiting around

going on. We couldn't
move until it had been executed. If birds
had been in our trees they would, surely as
eggs is eggs, have taken wing. Then, unexpected,
a shower of rain arrived, left a note, and
departed as quietly as it had come. “You have to
make your own weather.” And little black full stops
of flies flitted around my glass of red wine.