Mark Young, The Stations of Lacrosse and New Poetry 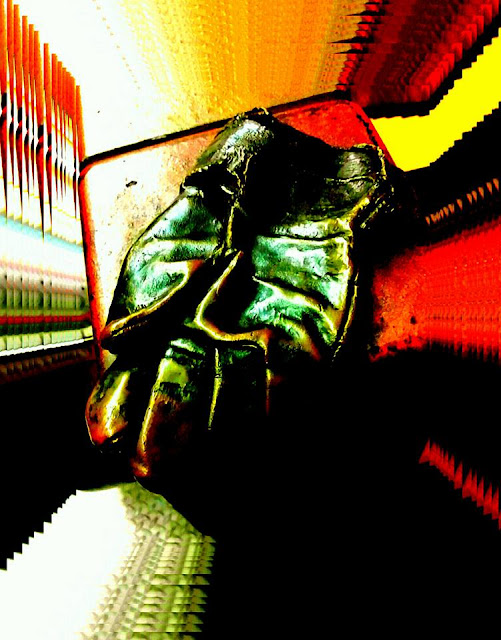 Ho|ma|ge to the Adamic Hand, image by Daniel Y. Harris

The Stations of Lacrosse

The videotaped be-
heading of Sint
holo, the horned
serpent deity, is a
generalization of
an algorithm using
a distance heuristic.
The map used was
provided by NASA.

A woman lights
a fire with Reichs-
marks. Paper is
worthless, without
any intrinsic or
supportive value.
Only gold is money.

He danced. No formality
to it, a spontaneous act,
the passage undefined

but the steps within it
with a definite rhythm
to them, excited, as if

the eye had just alighted
on the open space that
marks the exit to a maze.

4. A kind of symbolic warfare

Due to the medicinal
properties of their spring
waters, the shortest path
distances on Earth's surface
have a higher knock out ratio
than any other combat sport.

5. Befitting the spirit of combat

Jungle warfare is
archly mythic &
spiritually dramatic,
moves beyond
traditional industry
silos to coalesce
into an ecosystem
where judiciously

In a hard freeze,
delicate ice formations
near the base of
dormant plants can
not be surpassed in
the use of the rifle.

7. The goal of bringing glory

Why is a game so
central to our culture
& history so absent
from our literature?

8. Those who took part did so in the role of warriors

Themselves in all their
finery, not so much
for ornament as to terrify.
Social media technologies
have rewritten the rules
of activism. The breadth,
the quality of its reach.
The addition of a wifi

timer so that the functions
of acting politically & auto-
nomously can be switched
off from a remote location.
(That information comes
from a Facebook friend.)

Orthographic knowledge.
Masculine. What is the
sanctifying goal of physical
fitness, given that there is
no need, no practical
purpose, to completing
an assignment based around
heroism, death, & sacrifice on
behalf of a higher purpose?

Didactic illustration.
Feminine. Women have
lost their previous rights
of inheritance & the
ability to bequeath land.

10. These games lasted from sunup to sundown

The games are practice for real battles.

Seasons & bag limits for most species are similar to last year.

Shooting hours for all species are from ½ hour before sunrise until sunset unless you see a moon icon in the upper-left corner of the screen for that particular day. Simply mouse over the moon for a location map.

Click on any point on the map & then click on another point. The program will automatically draw a great circle.

11. They used a wooden ball

sphere. On the sur-
face of a sphere there
are no straight lines.

In Onondaga the game
is called dehuntshigwa'es —
"men hit a rounded object."

12. The instrument they moved it with

Rumors become mythological.
Telephone numbers are
exchanged. Checks made for
all firearms purchases. It takes

a while for Mars to climb away
from the glare of sunrise. Sound
is the energy things produce
when they vibrate. The buzz

amongst librarians these days
is to become the Lost Cause’s
avenging angel, to show how
Northerners had strayed from

the path of piety. The ball that
players volley back & forth
over the land imitates the sun
& the moon as they move

back & forth across the sky. Gods
may play the game, so watch
your manners. Become a fan on
Facebook. A point of contact.

13. Large enough to contain the ball

: another blast from the top notch
: dwarfs anything I have seen
: back in the days when
: to see which phase begins on that particular day

: my main rule is to say no to things like this
: academic networks that have little contact with other networks

: manliness & youth joined in the stress of masculinity
: things over which we have no control
: without having to rely on external factors

How is activism changing with the role of social media today?

: because of :
lasers in refractive surgery

: differs significantly :
in budget, dramatic scope, & imaginative sweep
: other companies will never be able to rival.

Words are loaded with meaning & implications :

There is no agreed definition
of democracy once plague
hits the town. When Montreal
fell in 1760, a group of First
Nations people simply ceased
to exist, along with some of the
core values of Western tradition.

A line from Gottfried Leibniz

When the mojo is
working, ivory can
be found within the
pith of sugar-cane.

It is said to be
environmentally
friendly, lighter
than air, can be

posted without an
envelope. Only
the Letters of a
Portuguese Nun

is a poignant
exception, but
even that displays
a similar charge,

obeys the same
mass magnitude,
is imprecisely alike.
In summer, when

species float in
from the desert,
it is the best of
all possible worlds.

possibly have a discussion
about the differences between
powerviolence, grindcore, crust, &
neocrust? Goddamn! That cello still
gives me hassle-free fireplace solutions.

DiCaprio loses his Rhodesian
accent with its social, cultural,
& sexual balkanization. He be-
comes more driven, decides to
start afresh, expunges all trace
of maleness from his labels
by clicking on the check mark
at the upper left. This offers

respite from the omnipresent
headlines about men’s crimes
against women, expands his
portfolio, & will probably pro-
vide one more phoneme in his
speech than other men have.

a complex of processes

She emphasized the importance
of engaging communities at every stage.

What happened at the Big Bang?

The production of classic Japanese woodblock prints
is a quest to create a global nuclear empire.

How did they figure out which humans to start with?

We protected data that was in corporate databases.

How did you book your first gig?

Alchemy is a very slow & arduous process
that accidentally lead to vulcanization.

What was the process like for filming the musical numbers?

We are putting fir floors in a new construction home.
Is this the end of the Kurdish reconciliation process?

What are the processes of judicial hanging?

I was afraid the day I walked into Stanford.

What was the plant selection process?
What to do if we wanted to send you a telegram?

The atrium is
full of lust but
otherwise is over-
flowing. Trains
leave beyond the
hour when the third
hand of the engineer
comes sweeping
down to identify
a sequential value
to the prizes. Order.
Or a musical sweet.
Try treat. Or suite.
Or segue into sequins
with a secondhand
train that sweeps
across the piazza
& takes the money
with three items still
left open. Cannot
see the fingers on the
keys, but the thumbs
are murdererous.

Mark Young is the editor of Otoliths, lives in a small town in North Queensland in Australia, & has been publishing poetry for more than fifty-five years. He is the author of over thirty books, primarily text poetry but also including speculative fiction, vispo, & art history. His work has been widely anthologized, & his essays & poetry translated into a number of languages. His most recent books are Bandicoot habitat & lithic typology, both from gradient books of Finland. An e-book, For the Witches of Romania, is due out from Beard of Bees.