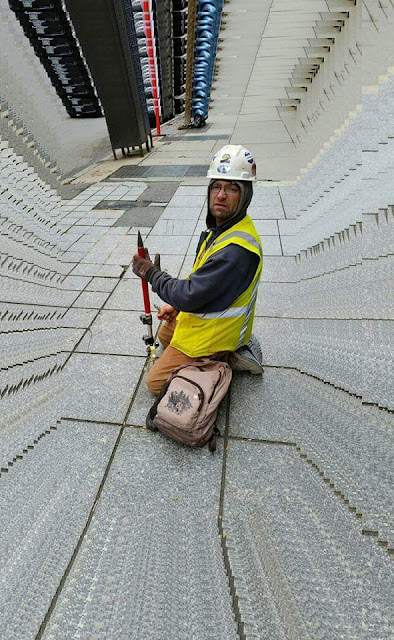 Ho|ma|ge to the Pavement’s Messiah, image by Daniel Y. Harris

These cubes are all broken, these grids
are not drawn straight. Any fool can do that
and one already has. I did not expect him
to have a beard, his art is too high tech.
Tomorrow I will see his sculpture
in a brand new light, as long as the gallery
is open. Let’s hope it’s not one of those
shows tucked into a corner, a token gesture
for those of us who don’t like installations
or childish drawings on the wall. Bob wrote
back to say the poem had made him laugh,
that it worked on several levels; Nathan said
he saw the review had gone up anyway,
had I had any response? None whatsoever,
though I await the email that tells me
it knows where I live. So do I: too far
from anywhere but near enough the creek.
If the woman knew how much unhappiness
she was causing do you think she’d care?
No-one seems to know although of course
it’s nothing personal. But she does live
out of the village and lacks basic social skills.
Apparently, Picasso’s striped sweaters
are responsible for the stripe paintings
hung here on the wall. His rose period
informs music videos many decades later
and his cigarettes have given us all cancer,
even though we never smoke. Warhol
invented tomato soup after drawing cans
but no-one has thought to melt Dali’s watch
to find out the secret of time. Outside,
there used to be an arc of rusting steel
curving round the snow piled up against it,
but someone complained, had it moved
away. Any fool could learn to do that.