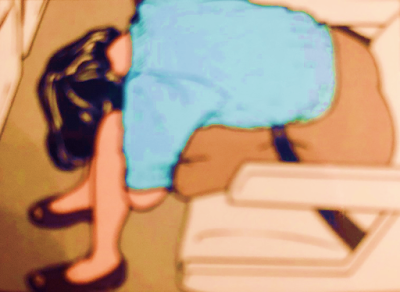 “The Airplane is an extension of the entire body”
(Marshall McLuhan, Extensions of Man)

taste its vocabulary, it says 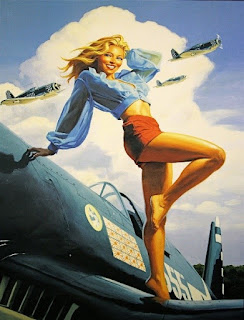 Re-rooted, from Old French plein;
from the Latin plenus; the proto-Italic, plenos;
proto-Indo-European plhonos; plainly said,
the airplane refers to that which is plenty,
pregnant, excessive, full – 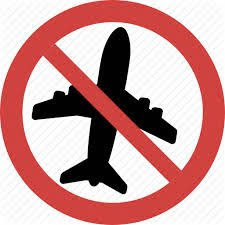 Yet also, plein
from Late Latin, plenarius as in a conference plenary –

Inscribed in its very name,
the plane embodies a double bind of excess and lack

all that is material and ethereal
illusive and policed

a glossopoeisis of sublime vistas yet also restriction, regulation

no smoking no toothpaste no laptops no firearms no lighters no small tools no liquids no gels no aerosols no lighters no matches no batteries no gel inserts no wrapped presents no box cutters no ice axes picks no knives no meat cleavers no razor-type blades no scissors no hockey sticks no mace no pepper spray no billy clubs or black jacks no brass knuckles,no ammunition or firearms no BB guns compressed-air guns no pellet guns starter pistols no fireworks or flares no blasting caps dynamite  no fuels or gasoline lighter fluid or flammable paints no turpentine paint thinners replicas of incendiaries  no chlorine  or bleach  no spray paint no tear gas

where the sky’s the limit

through a spoken web
of ribboned space

For, according to Lacan, it is in the relation to this limit,
crossing the threshold of this limit,
where ultimate pleasure resides10

and says:
“Touch anywhere to begin, 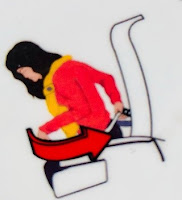 we are the seated letters fastened to each other
strapped down and writhing, mewling, bucking, like feral lionesses
growling and scratching and biting11

subordinated and taking command
through restrictions, constrictions
paths of torment

we are the seated letters with our masks beneath us, bound by
safe words, modes, modules, devices, desire and consent

and through private turbulence 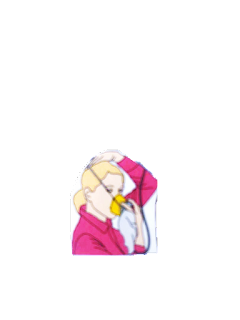 we are “in harmony with our [prospective] annihilation”12

& asks you please put on your masque before debording13

And as we rub shoulders
with abundance

between what is seen and unseen; heard between scenes, screens, schemes, screams
cockpits, lifts, radios, buds

as both a site of public and private space, the airplane celebrates itself
as an ever-shifting site of escape and refuge

reminding us how escape
is always entry into new dimensions – 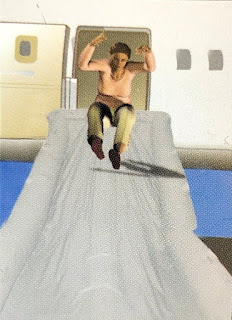 This is particularly underscored in the fact that the gematria for the Hebrew word for airplane, “matos” (271) also relates to the word for captive (ASSIR)
and to flee (ARAH 14

all servile, surveilled
a     salient      valence
of secrets swerves veils

the airplane functions
as a FOULCAULDIAN Panopticon

with a concerted distribution
of bodies, lights, gazes


how the entire establishment is functioning”15 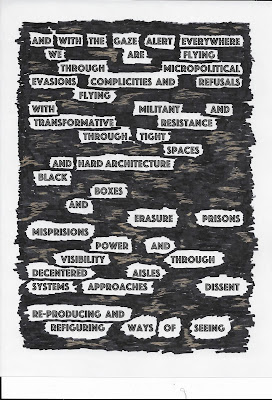 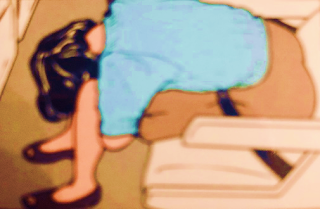 And through blankets, shrouds, masks
dogs, computers and metal detectors
the airplane as language is marked by uncertain subjects16

all vulnerable and aporetic
and in constant negotiation

operating as a democratic space --

a dialectics of otherness grounded in ex-static possibilities

not just an airplane but a their planecircumcised words

folding into and across, weathered wings / aluminum lungs
marking covenant, between all that is overt and covert,
coveting ravenous, cavernous
in parasidical polysemia

a multiplexity of disseminative slicing
as the plane cuts sky cuts skin cuts off, into
rites of passage

The Airplane Game or Plane Game is a style of pyramid scheme active in the 1980’s which involved joining an "airplane" where "passengers", "flight attendants" and “co-pilots” payed pilots who collected $12,000 from passengers to retire. The game progressed until each participant became “a pilot” who then themselves collected $12,000. Though the common version required passengers to pay $1,500 to receive $12,000 as a pilot, some airplanes were being run with $5,000 passengers and a $40,000 pilot payout. 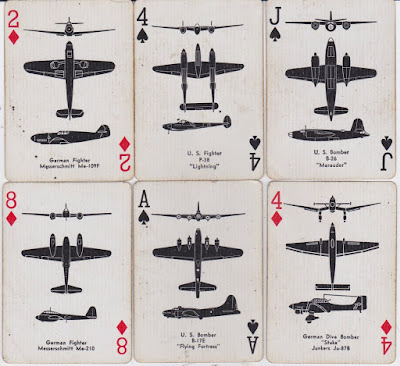 Highlighting Wittgensteinian language-games and Lyotardian Game Theory,
where even if we know the codes of “the game”, the rules are always-already local,
fluid, changing and contested, the airplane reminds us how, with every enunciation
re-articulation, there is a celebration of discourse as a series of traces
markings and echoes

a syllaboration of communication as polysemous play

where we inhabit, dwell
in the interstices, the aporias in a superfluity of folds
in the unheimlich space
of multiplicitous systems of social and cultural signification

and celebrates the deterritorialization
of joue le jeu the en jeu; of appelez’s play
of seduction addiction s’diction of slippery ellipses,
where play’s placed in a plaisir of pliant pleas a replayed display
where “the play’s the thing”.

like language itself, marked by distances, values, solitudes, convergences
the airplane travels through compressible fluid mediums of elastic particles
aching and desirous

in conversation with the sky

a diasporic polyvalence / polyVOLÉnce
negotiating itself

as an uncanny object

a cultural node in bracket space.

with wide-bodied elegance
each model struts along the runway --

sometimes it’s crying out under the weight of its
reference

from one destination
to another

performing its own genealogy

marked by its big nose and full body
gliding through an ærotics of visceral clusters syllabic grafts lifts rifts drifts:
a chordal accordance of discordant concordance

a flight of fancy
a Concord20 of s’ecrit sounds

So much dépense21
upon 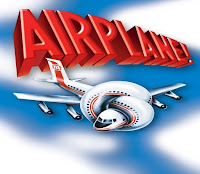 as nakedness is another form of apparel
an unmasking that is masking the mask,
the unveiling that is veiling the veil -- 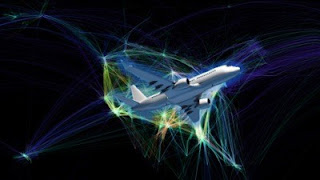 Yet maintaining its flight path
it mirrors the functioning of syntax; the set of rules, principles
and processes that govern the structure of sentences in a given language.

both the airplane and language
operate within rigorously calibrated
socio-linguistic, technologic and geographic systems
highlighting how limit and restriction engender ultimate possibility22 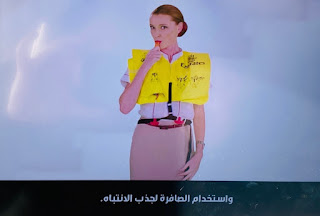 are the “home” that is the place of isolation and aloneness but also
the place of unison23, the haven of solitude and the womb of relationality
soaring through networks transfers

and with giddy truance, says: s Q’s me  or --
skip the queue 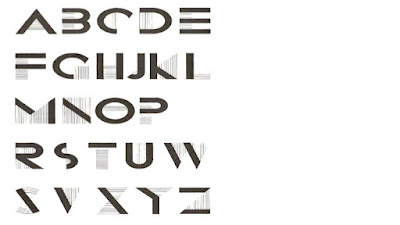 cruising through a circuitry of skewed cues --

we are the letters traveling through space and time
private and public, intimate and open

as par avion – where secreted in its very name,
l’envois,24 envoy (messenger) carrying la vois (to see)
and voi[x] (to voice) and by extension voile (veiling)

And through the reveille veils, avails, values, volés
as secrets mist binding days where dawn threads
majestically through the raging sky

the airplane reminds us that between seeing and saying
and the infinite veiling and unveiling
of language, meaning, being, communication and travel

as medium, en medias, as message and messenger
the airplane is always already massaging the ærotics of the secret and the social
through an ever-swirling circulation
of permission, submission
gradation, celebration 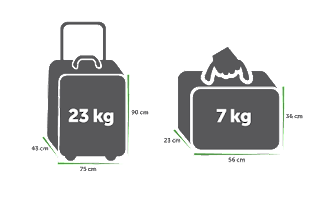 claimed and reclaimed from an ever-spiraling carousel25

Thank you for flying with us.
Please enjoy a safe evening and an easy transition
to your final destination 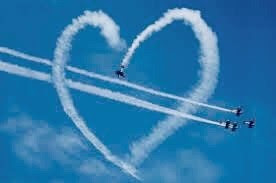 10. And also for Batailles: “The limit is only there to be overreached. Fear and horror are not the real and final reaction; on the contrary, they are a temptation to overstep the bounds.” – Georges Batailles, Eroticism: Death and Sensuality

12. For according to Batailles, “extreme seductiveness is at the boundary of horror”. See both
Visions of Excess and Story of the Eye.

14. According to Kabbalistic hermeneutics, not only is the gematria for airplane (matos) commensurate with “assir” (captive) and  “arah” (to flee) – but also  and “l’aymar” – to say.
Read through a 13th C. numerologic frame, the airplane further highlights that to speak is to flee; to fly into language, through planes of being

15. Michel Foucault, Discipline and Punish. Also, “The gaze is alert everywhere” and “The panoptic mechanism arranges spatial unities that make it possible to see constantly and to recognize immediately”. And as the letters traveling the space, with lateral [ ]visibility we become that compact mass, a locus of multiple exchanges.

16. ie open to hijacking, illegality, emigration, it’s is always in a state of negotiation.

See Derrida in “Autoimmunity” “vulnerable spaces such as air[planes] are integral to the existence of democracy, in their very vulnerability”.  Rogues (Stanford: Stanford University Press, 2005).

18. Or more specifically, called emPENnage, derived from the French, empenner, to feather an arrow [aero], the structure at the rear of an aircraft that not only provides stability during flight but controls pitch.

20. Like how language as a chordal concordance cuts across international codes, systems, boundaries, the Concorde supersonic jet co-developed by the British and the French, was the first airline company to be co-owned internationally. Taking its name from the word “concord” (from Middle English and Old French concorde, Latin concordia, from concors ‘of one mind’, and from con- ‘together’ + cor, cord- ‘heart’; a coming together), it’s very being is synecdochic of linguistic usage -- how a concord refers to the agreement between parts of speech; “…a concord of sweet sounds…” William Shakespeare, Merchant of Venice, Act V, Scene I. Also the Concorde was the only passenger plane to ever cross the sound barrier.

22.  This sense of limit is reminiscent of the Kabbalistic nation of Tzimtzum – how contraction is expansion; and infinite essence must be contained. Or, in the language of the Azriel of Gerona, the sefirotic potencies which collectively are the disclosure of the Tetragrammaton, are the limited force that is unlimited.

24. In some ways related to how Derrida writes in La carte postale: De Socrate à Freud et au-delà using the form of the private to inadvertently create something public; i.e. as a mode of both public and private transportation, this is particularly noteworthy in that we literally become par avian, mailed through space and time. Jacques Derrida, The Post Card: From Socrates to Freud and Beyond, University of Chicago Press, Chicago, 1987.

25. Like language communicated by way of the internet, (armed with data and broken up into individual packets is, sent out and connects back at its destination where it unloads its “information”), claimed and reclaimed from both intended and unintended destinations, the airplane metonymically stands in for the infinite ways information gets transmitted.
Posted by X-Peri at 9:51:00 AM