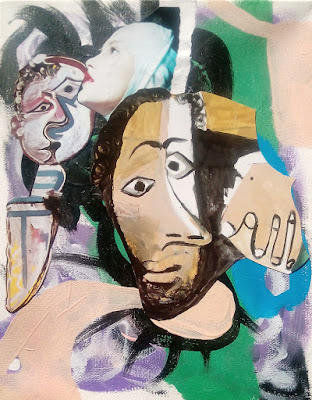 The hungry sheep look up, and are not fed…
―John Milton

In the beginning, a single cell divides
itself, becoming two cells in symbiosis,
giving a third dimension to words spoken
(once written), like Cerberus with an extra

serpentine pair of eyes gazing into
ambient spaces, until it becomes clear
that three times two is six and two
more is a new plant leafing itself into
a row of jelly bean-colored houses,
along the water running through
Burano, Italy, I can’t get those

figureheads off my bed. Or off
the walls! My forehead has grown
embarrassingly smaller than yours,
whoever you may be. I designed a labyrinth
to thrive inside and I hid the prototype
underneath a stone near my outdoor plants –

also embarrassingly smaller than yours.
Now, from a bottom corner of the canvas,
nymphs are sprinkling leaves on my head
which is secretly hosting a hive of bees.
I’m making honey and a movie trailer.
The honey is sweet, and it sticks to bones.
If you like the trailer, I’ll make the movie,

which will make you love me doubly, love me
two times two divided by our unruly, wayward
children. Fractious, if passages can wind
into abysses blank as frozen zaffer,
as the trees give rise to a hive by leaning,
finally, into Hell. I like being wayward
and drifting drunkenly in a boat copied
and pasted onto the river Styx. This is what

happens after spending more than two hundred
billable hours kicking up extra dopamine with
other runners. Suddenly you are accidental besties
with people who were probably antelopes
in recent lifetimes! Tomorrow I’ll peel
away from work and visit Mansard.
The place is a marsh and isn’t a marsh
mostly as unassuming as Westhaven?
Let’s say I’m a map and you’re “You are here” and someone
else, we don’t know who, is lost and needs our help.

When the planet is sleeping inside
a gigantic piece of Silly Putty,
while Platonic wings emerge on randomized
whims projected from the insides of flowers,
there is something unsayable
(which isn’t being mentioned now) that flashes
from the depths of insentience. It’s beautiful!