J. Karl Bogartte, Caution Is Not For Silence 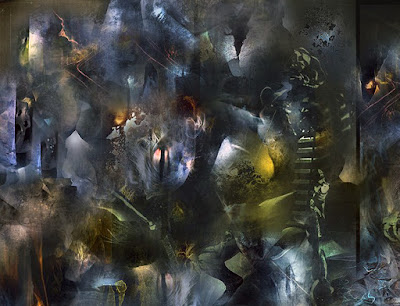 Caution Is Not For Silence
(Selections from The Red King)

Night in braille, poison and antidote for a hybrid of black and flower slashed by ultraviolet. To breathe clairvoyance through stone, speaking in tongues to the lost fingerprints traveling incognito towards daybreak. A single image replaces your history with layers of silence turned by paws into unrecognizable balconies. Light speaks, night listens. Pearls circling a miasma of gestures seeking an entrance.

For intoxication, there is fur for the enchanter’s tower, facial-lepidoptera for pelvic charm, dimensional collusion to enrich your brow of forgotten plumage. What is remembered is the irritation of possibility. The sting of dark perception. Primal movement, irresistible language pulled out of water for flame… What is recognizable as something, is unrecognizable as other into another. The mind is like the irritability of a missing limb. Language is the missing body. Breathing is the enchantment of movement. Plumage is formidable...

Flood, intoxication of the wolf-crystal, she is everywhere. A marvelous moisture. Scent understands you, follows your patterns of behavior. Drawn to what enables your defiance, figures of celluloid and slate and womb-like chairs invading your appearance. Long-haired and spindle-bursting for Flood who slumbers in the arms of Ghostly Apparel who burns brightly with Morphology. They are the whispers of default, litter of early rising dew. “Only shadows allowed in this place…”

“I am bound to you by clavicle and discord, a theory of corpse flowers for an aleatory conjuration… You transformed on the pollen table. I hardly know you by sight. I follow your footprints. I dissolve when necessary. I ignite.” You are not only an image… Incendiary.

No defeat, ever, salacious crisis for memory out of shuddering movement, to disregard, but for that delirious conspiring to incandescence.

Tomorrow arrives ahead of notice, through the open door, a one-eyed Quasimodo telescoping out of childish glee, altered by your gaze. The way to tell it without a story, but a dancing veil combining numbers that outpace each other, unlock entrances with shadow-language for the ones who never arrive, or return.

You appear to be only a rumor in the dark, only your shadow remains, half visible, outward cascade, roots toward cartilage, harp of the mouth, tracing whose face it was, whose absence that belonged to hearsay. Strange letters, mixed messages, diurnal, maternal language… A fog shadow behind your eyes seething with vanishing points, thrown behind you, the flapping machine of Santos-Dumont, strapped-on wings to resemble the rose of untouched lips, parted... A vagrant sewing machine stopped suddenly in mid thread…

The antlered guardian is a tiptoed dwarf veiled in royal chemise, espionage, dipped in mercury and wolf-shaped. To be torched into transparency.

Bright loves dark, befitting plumage, tempest of rain that ignites the skin, inside the wedding… outside, master of the rain, hard flowering. Stone is breath, is waterfall. You can only stay for a moment, to sputter and die in mirage… The air is bright with fingerprints of paradoxical locksmiths and keystrokes of cobalt and landmines of bone-lives against the realm. Tresses for the witch-chairs and which ones… Which ones…

She is chaste to defile the rules of the game, psychology toppled in another, another move, other displacement, moon revealed. Toppled by the Queen, pivoted by pawns, to hook and crook, the castle keeping… The Red King on his tripod, in the photograph despised, by sea shored in luminescence. All that you see is obscure and excitable, to exist in a sudden glance, blood is theory until smeared with sunlight. She let you into the haze, the semblance, into the counterfeit.

Awkward bodies flowering in the shadows, defeat their reflections. But always too bright to see. Caution is not for silence, but for light. Delirious is open, naked for Deception, who aviates in tune with tell-tale sights, zeroing in on anything simultaneous, here and there. To force a glow and a disappearance, polished by the storm. Hollowed out by a sudden shiver.

Her mouth of opium, above the looking glass disturbance, and so below, dripping in moonlight. Obsidian flakes in her breath. She is aleatory and hacker, untouchable trust and synopsis hammered precisely out of smoke…

Lamp is perilous when sleep-wandering, blue with vaulting. Like fruit that dies into splendor, like a slab of crystal, decoded, like the very last kiss between characters that never meet. “Because you’re not speaking the right words…”

When trees are buzzing, the skin crawls…

By animal warmth and eyelight, shaking the heron rattle in the lightning bed, cutting night into ladders and depth of field. The entrances grow further apart, the others growing more ambiguous, raising a deeper turbulence of instinct… To mingle with fury, elasticity for the body’s aboriginal web.

The jewelry-keepers are the magnetic poles of asymmetrical dialogue. The dark sub-rosa tourniquet arrives when poppies disrobe the alchemists for the red and blue shifts. The Mare speaks night when cornered in the Alcove of Rapture… riddled with systemic dialects… the way you ache for only that curious intimacy of ambiguous arcs. The bright ones, the whispering, those disjointed ones and the ones that hallucinate for wandering.