John Amen, From “My Gallery Days” 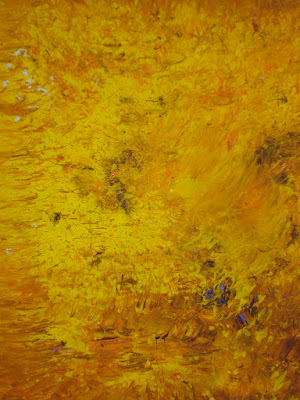 
From “My Gallery Days”

Five o’clock—prime time for boots & the Wild West,
yr opening line though I can’t say
I heard what came next, Helen’s 3-legged Cerberus
yapping on 33rd     the racket of the Alphabet.

Then the interminable open mic,
3 crossdressers heaving a fridge
out the 2nd-story window (to a stillborn villanelle).

Yr co-feature bombarded w/ minutia, a robot reciting
diary entries from a typical day in the word factory.
You blurted I wish I’d taken that desk job @ the bank.
Wtf would you do w/ vacation time in the Hamptons?

Take this as a compliment, you’re 0 if not adept
@ advancing yrself, I mean that to eulogize yr pitch-
perfect karma, so why da hangdog face? Why da huff?

So sorry for polishing off the tortillas,
& I did indeed snag the Benjamins from the mousetrap,
gossiping w/ Laurie over shots.

I added to my resume the 7 credits in Spiegel Park.
Diversion remains the only god I know. Leslie,
could you hear the taxmen & bulldozers in the distance?

In yr finest hour w/ a brush & Bourbon,
oblivious to audits & thunder from Albany,
you choked on the grant & gagged the interview.

A trip to East 9th shifted the mood for an hour,
but damn the coke vapor, a devil kicking in my lungs.

To the pigs who sang in Hillary’s walls.
Stuart trapped between studs, tuneless in the heat,
Carl panting in a doorframe, sick & shaking DTs,
grunting Provencal love songs
with a Long Island accent.

I removed the tank cover in her half-bath,
hooked a shriveled man who’d no doubt
drifted for seasons, sworn off his pocket watch
& eyes as dead as a cold call.

Hill I sd in white you gotta set the boy free,
Hill staring in gray, the miles tween Hill & me.

Mildred eulogized her stepfather in TX
while I finished her portrait with a palette knife
during Z’s Taurean salon.

After the gavel, Mildred’s solstice on ECT,
I spent July clean, banged out “The Verdict,”
a photomontage of Mildred in drag.
I won the ITY grant, the stepfather’s daughter
twitching on a gurney in Somewhere, TX.

3 months later, I was 4 days out of treatment
& already stoned, railing how Mildred slipped away.
Amidst the racket & regret,
I skulked past being famous.

This changes things sd Louisa, squinting her right eye,
then left, unscrewing the Van Dyke. I cleared my throat,
came to mid-spike, mid-portrait, & there
was Mississippi Deena, foundering in valium&vodka.

Corduroy Dennis dropped off 15 irons
& 23 hubcaps, bartered & bantered for shrooms&sugar,
waving an X-Acto for shrooms&sugar.
Soon it’d be dark, sooner than was bearable, my father’s
generation mute, mine fumbling @ the turnstile of narcissism.

O my digital Yahweh, how to capture a grayscale twilight.

for I think it was Heather

Jaeger said that Doggett staged the fiasco, it was
his scripted swansong. I never told you a dream I had,
you & Doggett & I were sprawled on the Newburgh pier,
sharing a calzone, arguing about
Jay Sanford’s “unmasked” @ the Brooklyn EuroFest,
when Doggett stood up, dashed a crust to the ripples,
& proclaimed me the inaugural solipsist!

AM I soared on Adderall, crashing @ dusk,
Claude on 51st w/ his rainbow pipe,
dude humming along to Coltrane
standards on tape, dude dead in a snowdrift in May.

I rode those sirens to Bellevue,
role-playing w/ a drip-IV
while Dr. Bauman studied his DSM.

August: the tax scandal @ the co-op,
bad PR re L’s mock auto-da-fé, & no buyers
for my portraits of Heather G, who’d vanished

amidst the pyrotechnics, 4 days cold in a Nyack slum.
Her obit swept the blogs,
her face still blows in my sleep,
these spattered rooms I can never leave.

Hijacked by Evie’s Dilaudid Rx,
I did my best to illustrate Louisa’s limbo,

took me 2 weeks to nail the watery umber
of her Sicilian eyes, mixing & remixing
to invoke that Ophelian aura, flummoxed
by her chosen backdrop (faux “Acanthus” circa 1880).

Grant deadlines converged, I dreamt
I was a tearaway riding south in an empty caboose.
(I wanted to wake beside a steaming river,
pawn my antique palette, I still
wanna talk shop over rare steaks & a blank canvas)

Nothing like a protractor & tube of Windsor red,
Louisa in the doorway wilting & her feet throbbed,
the U of B critics had lambasted her floating studio.