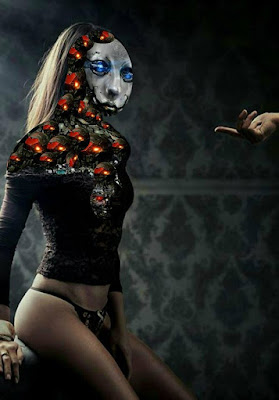 Fembot Fatale of the Hivemind, image by Daniel Y. Harris


SEX AND THE DOUBLE-TITLE POEM

Only 46% of our world cultures enjoy
this phenomenon—the majority bored
or repulsed by oral contact. In Europe,
one-percenters were the innovators, as
Kings and Queens and courtiers tried

Kissing. Commoners (always eager to ape
the antics of their oppressors) gave it a try;
found it good—and kissing became the fad.
In case you think I’m mad—I read this in
National Geographic! For that 54% I feel

72. No more. No less. “Promise, large promise,”
Johnson says, “is the soul of an advertisement.”
At 16, hormones raging, the only female bodies
he’d seen were burkha’d from head to toe. How
provocative those eyes!—HUGE, that promise.

Virgins! In heaven! Unburkha’d! 72 of them!
So he strapped a vest to his own virgin body
& blew himself to bits (with 26 infidels: men,
women, children). 72 virgins? Caveat emptor!
Too late. This deal’s done. He didn’t even get

Ethnicity. I never saw a Jacobin slight a King—
a Homer cluck a slur at a Fantail. Still, when it
came to mating, Kings only had eyes for Kings;
Jacobins—for Jacobins. So much for kumbaya
elation. Pigeons don’t give a flying shit for—

Not created by 5-star chefs, but 50-lira whores
whose mama mias taught them that the way to
a man’s pants is through his nose. That aroma
raised the eyes of many a hungry Napolitano—
to 2nd story windows, offering 2 for 1 delights.

Puttanesca. Olives, garlic, anchovies, capers.
Perfect recipe for busy working girls bent on
cooking up a cheap but savory dish. Easy to
put together on the fly. Still sooo delectable!
Yet, I suspect, even tastier, before it became

Lays guilt trips on whatever goes awry—
Should’a done this... Should’a done that…
(always followed by—Sorry, it’s too late).
Swears to be Angel of teachable moments.
(Don’t be fooled. Should’a’s full of hate.)

Should’a’s relentless; will rat-tat-tat away
till you shout, why didn’ t I make him wear
a condom? wish I never married the creep.
Only way to end the bullying—play the IF
card. If I could’a, you know damn well, I