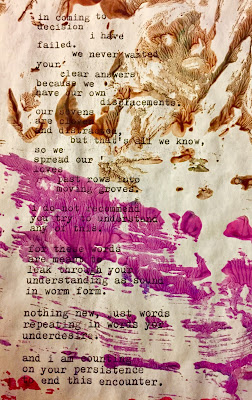 out light.  they are
out, and the darkness of the
room with no windows
is complete.  we have gathered here
for trial, but now
we cannot see what lies before
us to test anything.
leveled here--we all rely on
our other senses to
find an exit, if one exists.

aced.  the hold.  out
the sequence.  no delineation of motion.
i in three folds
become undone.  delivered in range.  the
time to underknow as
understatement.  i have found your message
though late.  no act.
image.  clock hands and knots.  the
replicating machine is still
moving.  filled, the holes.  am target
the skin for flaying
a closer view.  with spars in
containers.  the thread loose
in counting.  i as founding in
liquid our placement.  virtue
outside.  wandering.  the blots tightly turned.

a line has two sides
as hand, as work, as beam
without which I have
no line to follow,
so i
stay
hoping for direction from words
thrown up as down,
as cursive on water where
i hope to stand
but do not.

in sinking i could ask
for help, but i am
curious about the
dark shapes moving
below me.

our actions have their own misdirections
(and though you think i will concede,
i am dedicated.)
for at last the animal to be tamed is you;
thus, the armory you built in my shed
must be opened, the person that you thought
you were playing must be replaced with the person
you are.
(i can tell with general accuracy where i am,
unless we are at sea.)
we have counted on the misdirections as
dusty tributes given under dull skies; still,
i wonder about geography and try
to distance myself from you,
gathering as i go from the herd the general rules.
i suspect that they will catch up with you.

the get
caught work. city.
the second function end.
a random script, charity in
belief.

William Allegrezza edits the e-zine Moria and teaches at Indiana University Northwest. He has previously published many poetry books, including In the Weaver's Valley, Ladders in July, Fragile Replacements, Collective Instant, Aquinas and the Mississippi (with Garin Cycholl), Covering Over, and Densities, Apparitions; two anthologies, The City Visible: Chicago Poetry for the New Century and La Alteración del Silencio: Poesía Norteamericana Reciente; seven chapbooks, including Sonoluminescence (co-written with Simone Muench) and Filament Sense (Ypolita Press); and many poetry reviews, articles, and poems. He founded and curated series A, a reading series in Chicago, from 2006-2010. In addition, he occasionally posts his thoughts at P-P-Ramblings.