Pierre Joris, Opening Scene from THE AGONY OF I.B. 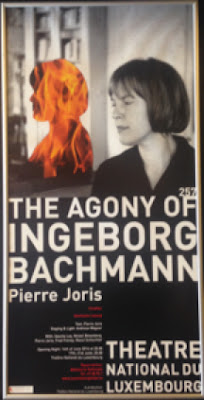 The Agony of I.B., by Pierre Joris,
poster from the premier at the Theatre National du Luxemborg, June 14, 2016

Commentary on The Agony of I.B.

Asked by the TNL (Theatre National du Luxembourg) to be author-in-residence for the 2015-2016 season, I proposed as my second and final play, a 3-act drama concerning the death of poet Ingeborg Bachmann. She died — mythically speaking — through fire, falling asleep with a lit cigarette; though what actually caused the 3-week coma from which she wasn’t able to come out, was her addiction to pills. In my play she is visited by the three most important men in her life: playwright Max Frisch, composer Hans Werner Henze, and her greatest and earliest love, Paul Celan. The play premiered, as a staged reading, at the TNL on 14 June with Sascha Ley as Bachmann, Nickel Bösenberg as Frisch, Fred Frenay as Henze, Raoul Schlechter as Celan & myself as the poet/presenter.

(Opening Scene from The Agony of I.B.)
THE AGONY OF I.B.

ACT [I]
SCENE 1
(I.B.'s room in Rome,in the house on 66 via Giulia. Schematically stage image: stage-right 2/3 back, a window; stage-right front: a door leading outside; a desk with typewriter; stage-left kitchen/bathroom via open door or open plan; stage center-front: a low table with gramophone & telephone, an ottoman; stage-center back: a bed, upright, near vertical against which IB can lean, as if she was lying on it. On a gramophone, a record of Neapolitan folk singer's Roberto Murolo's "‪(Totò) Malafemmena"  is playing. IB in bathrobe & with thick eye-glasses wanders from window to writing desk to bathroom. She returns with a pill bottle, swallows down a handful without water, then goes back to window, stands at angle of window peering out at the street below. She lights a Gitane, takes a few deep drags, closes her eyes, listens for a few moments, then walks over to the gramophone & lifts the arm off the record with a noticeable scratching sound. She wanders back to the middle of the room.)
INGEBORG BACHMANN
I'm running out. (Laughs) No, no, not going anywhere, certainly not running. Certainly not outside. No, no — I am nearly out: of cigarettes, of pills, "mother's little helpers," Henry used to call them. Oh, screw Henry, screw America. That was long ago and seriously minor. This is Rome. Roma, Roma, Roma. Ti amo translates as I hate you, tourist whore. Because I cannot be in Vienna. But I am writing Vienna.
(She throws empty pill bottle into wastebasket, walks over to her writing desk, sits down heavily, crushes cigarette out in ashtray then immediately lights another one, leans back & blows smoke at the ceiling)
INGEBORG BACHMANN (Continued)

Vienna... Vienna... come, come, Vienna, oh how I wish for Wien, Wien...basta Roma — I have to move back to Vienna, it will happen later this year, as soon as I finish this... As soon as I'm through wandering the desert, there's something more to learn from the desert... words, words, please come, words, come running, yes, yes, I am not out of words, they come running... But they leave me stranded elsewhere, seems I'm always home elsewhere wherever elsewhere is, right now the space between Rome and Vienna is... [She laughs]... The desert... Sand and rocks... That helps to clear the head!
(she types with concentration for a minute in deep silence; first slowly, picking out letters one by one, then faster & faster: typewriter noises in an accelerating crescendo caught by mic hidden behind it & broadcast, becoming a background noise to the scene; brusque carriage returns scatter the ashes of the cigarette over the floor; the Gitane in her left hand burns down to her fingers — she just shakes it off as if the burn didn't hurt at all, drops the minuscule butt to the floor)
INGEBORG BACHMANN (Continued)

Franza, Franza, you were the closest to me, but had to die, we all have to, we all will. Easier done for real than in a book, where the art of disappearing is a long drawn-out act, usually much quicker in real life, well I can manage on either side of the curtain, I hope. Yes, I can finish the book by writing into the middle now, returning to the desert, that other empty page. Am in the desert anyway, Vienna will be desert too, my past, all past is desert, desert peopled by ghosts. Malina is done, is over. It was murder, She was pushed into the crack. Over and out. I need out again.
(She types fast for a minute, then tears the page out of the machine, gets up and walks to the middle of the room, another lit cigarette in her hand. She stops, looks at the page then reads it aloud, as if trying out the sentences on an audience)
INGEBORG BACHMANN (Continued)

"Desert stars. Orion's belt around my waist, a swing to swing on. Wing it on. In-between sand and sky. The in-between that is not just the page but that is time, in-between time. Time is in-between, in fact that is all time is: an in-between. What was the word Mohammed used? Bar....bar... Bar-zakh — that was in Wadi Halfa where in-between time has become water, eternity — to gain eternity go into the water, dive, dive out of time.
(She drops the sheet of paper, looks around, pauses for a moment, then says meditatively:)
INGEBORG BACHMANN (Continued)

Paul did jump, oh Paul, where are you now, in time, in water, in eternity... Someone told me that in the desert more people drown than die of thirst, flash floods far away sudden storms wash down the dry wadi gully you sleep in...hoping to wake up in the morning...But it is hope that kills us, hope that every time lets you down, brings you down, but I will re-birth you, we're half-way there, we'll get there, all of us, all of you, my many Wienerinnen, there will be more of you, you will resuscitate, but before you can take flight,you will have to give up hope, no, not just give it up, kill it, bury it, write it out of existence.
(She gets up, opens the window, leans out, looks up & down the street while traffic noise of a busy Roman evening enter in waves.)
INGEBORG BACHMANN (Continued)

Too much light. Day's too bright. My bird won't fly. My bird won't come. Roll back the day, bring on the night.
(She leans further out, seeming to strain ears and eyes as street noise Rome style wafts in. After a minute the noise & the light in her room dim slowly)