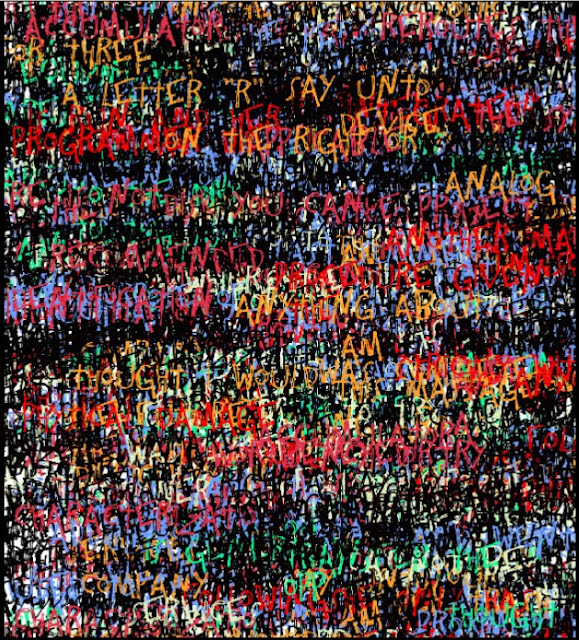 Born Cuckoo, Technical
I became a Vagabond, Condensed.
She was très Avantgarde
always the Jester.
Our relationship Allegro.
We vacation in Geneva.
Our life Storybook.
Our son Tristan, of course.
How Poetica.

“Dull, how I found it dull.
Dull wind. Dull branches.
Pinkman locked in a cage
and Heisenberg on the mountain.”
With her waist that’s made of shadow
Skyler dreams on the high veranda,
green the stash, and green the dresses,
with eyes of frozen silver.
Green, as I love you, greenly.
Beneath the moon of the Federales
surveillance cams look at her
things she cannot see.

Green, as I love you, greenly.
Great piles of green dollars
come with my husband in the shadows
open the basement and groan.
Holly’s cries floating on the dawn wind
with the rasping of the branches,
and the mountain thieving cat-like
bristles with its sour graves.
Who is coming? And from where?
Skyler waits on the high veranda,
green the flesh and green the tresses,
dreaming of Mike the enforcer.

- ‘Brother-in-law, friend, I want to barter
a plea bargain for your freedom,
sell my story to the Enquirer,
change my desk job for a promotion.
Brother mine, I come here bleeding
from the mountain pass of ambush.’
- ‘If I could, my bald friend,
then maybe we’d strike a bargain,
but I am no longer I,
nor is this house, of mine, mine.’
- ‘Brother-in-law, friend, I want to die now,
in my own bed watching television,
with Marie beside me, if she can be,
I mean if she isn’t busy prying.
Can you see the wound I carry
from my throat to my heart?’
- ‘Three hundred silver badges
your white shirt now carries.

Now they climb, Heisenberg and Hank,
up there to the high veranda,
letting fall a trail of blood drops,
letting fall a trail of tears.
On the morning rooftops,
trembling, another Emmy.
A thousand tambourines of bluest glass
wound the light of daybreak.
Green, as I love you, greenly.
Green the wind, and green the money.
They climbed up, the two companions.
In the mouth, their dark plot lines
left there a strange flavor,
of gall, and mint, and sweet-basil.
- ‘Brother, friend! Where is she, tell me,
where is she, your bitter Skyler?
How often, she waited for you!
How often, she would have waited,
cool the face, and bleach blonde the tresses,
on this green veranda!’

Over the next script’s golden surface
Skyler deeply ponders.
Green is the flesh, green the tresses.
Her eyes were frozen silver.
An ice-ray made of moonlight
held her above the water.
How intimate the night became,
as she thought of her husband and his cancer.
DEA agents were beating,
beating, beating on the door frame.
Green, as I love you, greenly.
Green the wind, and green the dollars.
Pinkman locked in a cage
and Heisenberg on the mountain.

A car runs on desire. Don’t
let them tell you otherwise. When
you have the slightest memory, which
fits into your head like an oyster in
its shell, don’t expect much more.
And the people you meet fit
neatly into two categories. Some are
ripe and some are green as June.

with quicksilver moon and rebirth
with a daggered, shaky hand.

Listen, under a canopy of mangoes
the husbands jingle and chill

but these gloved husbands
reverently dissect another baseball

while an underworld of perfumed wives
waits softly like ferns.

What primordial question rose
up bubbling once upon a
tribe in molten moth mist, and

now looks up backward through
a microscope to see a labcoated
ape preserved in amethyst?

Russian poets are the greatest of all.
With misaligned smiles or none at all.
Their black sun arrives in a worn basket
staring back at you like an empty pulpit.

If you tell them their horoscope they
convulse, or cry quizzically. It is
their right to be great. Their CT scans
show the most exotic bird.

We others seem grey by comparison
because their black lacks atmosphere, a blanket like space.
Within the infinity of their eyes whorls of green humble the wonders of the ages.

When she rarely smiles, between cigarettes,
the lights of Moscow or St. Petersburg dance like ghosts
and somewhere a ship's horn in the fog sounds lost.
Russian poets aren't gay or sad. The geologic strata of our minds can't comprehend
how their mothers went softly mad.

We bought just the right shirt but can't figure
out why, the Russian poets just know.
They are cosmic sons of bitches.

It Was the Rhythm of the Thing to Be

That described its permanence, like horoscopes
on a Saturday morning in a jello chair. Snopes

couldn't debunk our flirtations at the
laundromat, although we publicly washed separately

the colors of malice and chromatic calm as the
healthcare debate raged on. Even on

as if the quarters we spent on laundry were
apostrophes signifying possessives.

At that altitude, full of confidences it was
kinky that we were skiing down such vertiginous

moments. Tonight ignoring the reader there who
ferments quietly in glamorous confusion.


Larry Sawyer curates the Myopic Poetry Series and is the co-director of The Chicago School of Poetics. He also edits www.milkmag.org. Poetry has appeared recently in Boston Review, Verse Daily, and the Academy of American Poets Poem-a-Day Project.