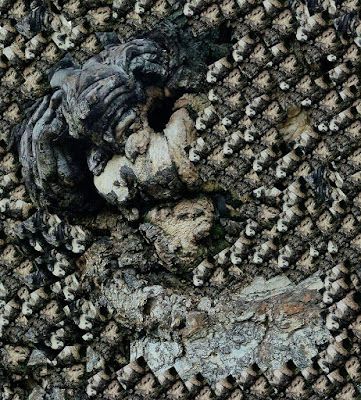 Without warning, a door

In the pit of the night, a door
in my mind opened and my mother
came through, not as she was
in her eighties, no, still vibrant,

flirty, her hair in a braid round
her head black as a pool of ink
wearing a summer dress turquoise
with white daisies, laughing loud

from her belly as never in those
last lonely years bumping around
the Florida house she hated without
women friends, just my father

to belittle and grump at her. How
vibrating with strength and energy
before disdain and lacklove wore her
to a fading nubbin of loose flesh.

How much can any woman endure
before she lets hope flitter off?
Before she watches death coming
and smiles as she used to, decades

before when she saw a handsome
man –he had to be handsome –
making eye contact and she knew
she could have him if she chose.

Come to bed as rain
crawls over the roof
fingers the windows.

Night is thick
as couch stuffing.
It thrusts our eyes full.

Neighbors have gone south
with robins and humming
birds.  Foxes: our neighbors

all whose supper we
hear scream.  Come
to bed, pull the quilt

up over our warm
bodies and knit them
together, a silken

blanket of answered
wishes.  We too eat
flesh.  The fox no

longer fears us but
prances past, playing
with a dead mouse.

Let us blend into night
all of us– one large
heat seeking missile.

In previous times, people said
you went to hospital to die.  Now
near the end you are kept a zombie
helplessly undead against your will.

Tubes stuck here and there
penetrate your soft issues
and every tender orifice.
Machines breathe and digest.

All the while the bills grow
like tumors.  Doctors forbid you
to give your body back so you
can finally, finally let go.

for Anastasia with whom I spoke Greek after too long

I remember the magpies natty
in black and white under the gnarled
twisty trunks and matte grey leaves
of old olive trees.

Fallen olives lay in the grass
beneath like the shiny black backs
of beetles. The peasant woman
who gave us water cold

from her well said the magpies
steal.  She said the same thing
of the gypsies camped in the valley
below.  in those days

they traveled with gaudy big
wheeled carts pulled by thin horses.
They were passing through too, but
a camera did our stealing.

We climbed a dusty path among
sharp grey rocks past dung beetles
pushing their balls up the slope.
At the top a cloud rolled in

and smothered the view.  We could
hear rain falling below us but sun
burned our shoulders, our heads.
We ate bread and mizithra

still crosshatched from the netted
bag it hung in.  A curious goat came
to watch, then three, then seven
in a circle around us.

I gave them leftover bread. I felt clear
as the sea below on that mountain,
my head empty of fuss: just a calm
body uncoiling in the sun.

I saw a snowy owl once,
once only. At Logan Airport
in January I was sitting in a plane
stalled on a runway

there for an hour, traffic
backed up by some distant
storm or computer glitch.
I was fretting, impatient

and then I stared out
the dirty window and saw
him sitting on the dead
weeds. He wore a thin

circlet of dark, a coronet
against the glisten of his
feathers.  He was close
to the runway, gold eyes

half shut, his snowiness
on lightly thatched brown.
He was silence with wings--
a shining pure predator.

It was a visitation
from tundra and dream.
I could have prayed to him
so still, so strangely perfect.

Knopf just brought out Marge Piercy’s 19th poetry book MADE IN DETROIT as well as the paperback of THE HUNGER MOON: New & Selected Poems 1980-2010. Piercy has published 17 novels , most recently SEX WARS; PM Press republished DANCE THE EAGLE TO SLEEP, VIDA and BRAIDED LIVES with new introductions and her first short story collection, THE COST OF LUNCH, ETC. now in paperback with 2 new stories and an introduction. Her memoir is SLEEPING WITH CATS, Harper Perennial. Her newest nonfiction book is MY LIFE, MY BODY: essays, a long interview and some poems, from PM.  Her website is www.margepiercy.com.